Yesterday, I was upset that the Philippine Atmospheric Geophysical and Astronomical Services Administration (PAGASA) declared public storm warning signal (PSWS) #1 over Metro Manila at 11:45am, when it was sunny, thin clouds above. So pre-school afternoon classes have been cancelled. My younger daughter who was excited to go to her 12:30 – 3:30pm class was sad when I told her that classes have been cancelled.

The range of PAGASA warning was far out, signal #1 from Marinduque & Burias Islands south of M.Manila up to Tarlac and Pangasinan in the north. Tropical storm  “Rammasun” (local name “Glenda”) was still several hundreds of kilometres away from any Philippine island when the storm signal was declared. I could understand putting Marinduque, Batangas, Quezon under signal #1 at 11:45am, but not Metro Manila. There was no strong rain the whole day yesterday until evening, until this morning.

Below, PAGASA graphics as of 11 am today. 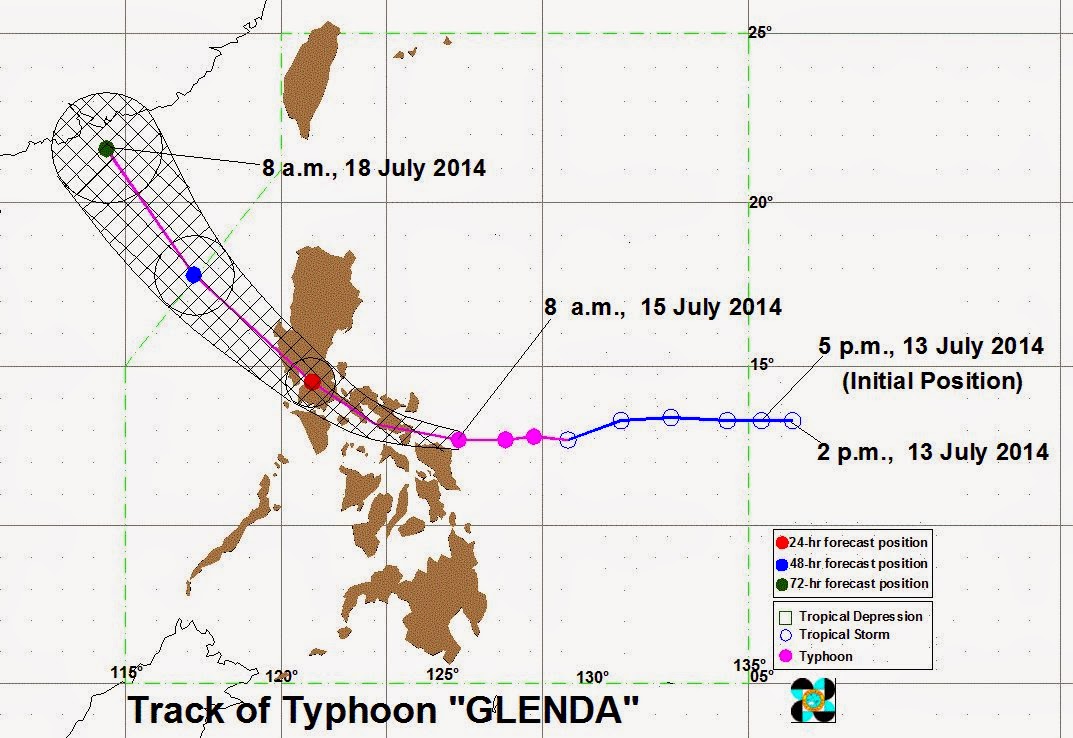 As of 11am yesterday, PAGASA said,

"Forecast Positions: Tropical Storm“GLENDA” is expected to be in the vicinity of Virac Catanduanes by tomorrow morning and at 240 km Northwest of Dagupan City by Wednesday morning."

So a landfall about 20 hours away, in Catanduanes island far away from Metro Manila, was far out to declare signal #1. PAGASA was being paranoid.

Also yesterday at its 3:02pm advisory, PAGASA said,
"Expect thunderstorm over Nueva Ecija, Metro Manila and other areas of Rizal in the next 2 hours."

By 5 pm, there was no thunderstorm in M.Manila. So even a forecast for the next two hours, PAGASA can be imprecised. One reason why people and meteorological agencies like PAGASA and others under the UN World Meteorological Organization (WMO) should stop claiming with certainty that global temperature will rise by 1 or 2 or even 4 C some 100 years from now.

Some friends suggested that it is a “no win situation” for PAGASA, especially if they do not declare a storm signal and it pours hard, they will be blamed by the public. 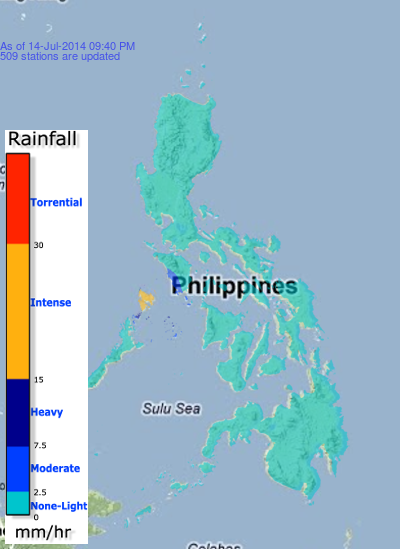 Paranoia can cause damages like loss of productivity. Parents pay for school fees and schools don't hold classes because of some paranoid weather announcement.

Problem here, no one can hold PAGASA liable. It has no contract with anyone of us, so it breaks not a single contract, so no one can sue it or penalize it, like cut its annual funding. We have gotten used to government inefficiencies that one inefficiency after another becomes tolerable and even defensible. The usual solution is to give more tax money to an inefficient agency. "Ayy inefficient sila, kulang kasi sa pondo, dagdagan natin."

Below, a news headline from Philippine Star yesterday. 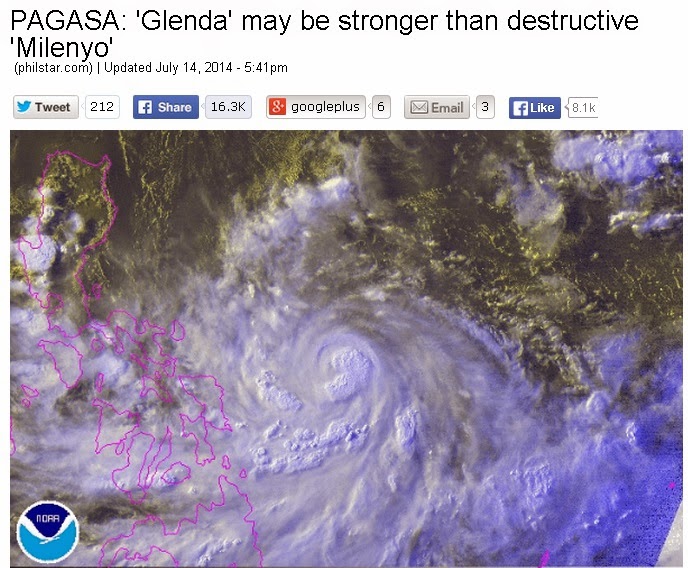 If one has a big event, say a musical/rock concert, and PAGASA says there will be storm signal #2 or #3 on the day of the event, the organizer cancels the event two  or three days ahead, and the storm was not even of signal #1 strength, who can the organizer blame and possibly ask for compensation for the damage? Not PAGASA, it has no contract anyone in the country except Congress. Sorry na lang tayo pag palpak forecasting nila. Most likely they will get additional funding from Congress next year. A monopoly is rewarded, not penalized, for its inefficiency. If it is a private forecasting company, it will go bankrupt if it continues to provide false forecasts.


Again, weather and climate are highly uncertain and forecasts are highly unreliable the longer the projected period.  When some government agencies predict a global warming of 2 C or 3 or 4 C100 years from now, they can be practicing voodoo science to produce voodoo scare in the hearts and minds of the public. And the public can be easily hoodwinked to accept various environmental regulations, energy taxation and cronyism, huge climate loans, climate bureaucracies and frequent climate junkets.
--------------

PAGASA does not Suspend school. DepEd and LGUs do.

Declaring Signal 1 was/is the right call. Rethinking how class suspensions are declared needs to be addressed. I agree July 14th class suspensions was wrong with lost productivity, however, PAGASA is not to blame. If anything we have to commend their efforts for trying to warn the populous of the coming danger of Glenda which is now upon us.

Storm Signal #1:
A tropical cyclone will affect an area.
Winds of 30-60 kph is expected.
Intermittent rains may be expected in at least 36 hours. (When the tropical cyclone develops very close to an area, a shorter lead time of the occurrence of the winds will be specified in the warning bulletin.)

Executive Order No. 66 says when Storm Signal 1 is raised pre-school only is automatically suspended.
If Elementary or High school classes are suspended that is a call that comes from the Mayor or each individual school.

I hate PAGASA, but in this case, you are wrong that they are to blame for Class suspensions and lost productivity. The blame is with Executive Order No. 66 and LGUs.

Thanks for the comment. You are right that PAGASA does NOT suspend classes. But PAGASA knows 100 percent the consequences of putting an area into storm signal, that certain classes will be suspended or cancelled. DepEd or LGUs or private school admin have made the "automatic suspension of classes" based on PAGASA storm signals.

I maintain that PAGASA is to blame for the school productivity losses yesterday afternoon, July 14. The schools simply apply the "automatic suspension" formula based on what PAGASA will declare.