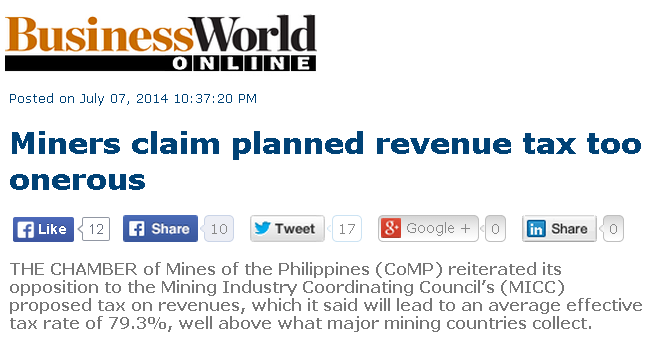 “We are dismayed that the MICC has moved forward with a proposed increased tax policy without taking into consideration comments and observations not only from the mining industry that will be directly affected by said policy but by authoritative third parties,” CoMP said.

The MICC proposed a payment of 10% of gross revenue, or 55% of the Adjusted Net Mining Revenue, whichever may be higher.

Perhaps the MICC, in particular the Department of Trade and Industry (DTI), environmental militants and LGUs want the big, legal mining firms to become illegitimate "small scale" miners, them who pay zero tax to the BIR, only small fees to LGUs, do not undertake any CSR or reforestation after mining.

I heard that the MICC bills are DTI versions, Am curious, why did they stop at 79% effective tax rate, why not 89% or 99%? Kunin na lahat ng gobyerno?

Julian Payne, president of the Canadian Chamber of Commerce in the Philippines,... called for actions to make investments in mining competitive with that in other countries.... government should review the recent "no-go zones" in maps that have been published, which, he said "make 85% of the country off limits to minerals exploration." http://www.sunstar.com.ph/.../review-tax-plan-mining...

The MICC approved in May the imposition of either a 10 percent tax on gross revenues or a tax of 55 percent on adjusted net mining revenues (ANMR) plus a percentage of windfall profit, whichever would give higher revenues to the government.

Incentives to mining investments shall be limited to duty-free importation of specialized capital equipment and five-year amortization of pre-operating expenses....

The Canadian business chamber is also urging the replacement of the MICC by a new Consultative and Advisory Council on Mining (CACM) which would have a wider stakeholder representation in government, private sector and business groups.

“There are other countries with more reasonable tax structures and are equally [if not better] endowed than the Philippines,” (COMP) said.

“The results of our financial modeling indicate that the government share under such proposal will be much higher than [those of] large mineral producing jurisdictions such as Canada, Queensland (Australia), Peru, South Africa, Chile and Papua New Guinea.”

Since July 2012, only one or first mining exploration permit has been issued? See 1st mining permit issued, Manila Standard, July 01, 2014, Mining is really "evil." The production and manufacturing of cell phones, watches, laptops, tv, cars, buses, etc., all products of mining, should be limited to restrict the march of this "evil" industry.

A friend from EITI commented that "the social cost of mining is different from mining in Canada, Peru or Australia. Mining tax which constitutes the bigger chunk of social benefit from mining should outweigh social cost."

My friend saw Rio Tuba nickel mining that responsible mining -- zero mine tailings in rivers and sea; rehabilitation and reforestation of mined out areas, giving livelihood projects to nearby communities even if the people there are not employees, etc. -- is happening. Only large-scale corporate mining can do that. What reallly causes high "social cost of mining" is small-scale mining. Zero tax payment to BIR, zero reforestation and rehabilitation after deep and wide quarrying, zero education/ healthcare/ housing programs for employees, etc. So by pushing for heavy taxation of large-scale, legal mining, government and the militant NGOs are pushing some of these companies to sub-contract the work to "small-scale" while reporting small revenues that are subject to 79 percent tax rate, exclusive of the cost of mandatory CSR projects to communities.


I think if government will further raise mining taxes, only the corrupt players will survive. The tax assessors and collectors will extort money while the players will pay and bribe them, in exchange for understatement of revenues and hence, the taxable income. The honest big players will slowly fade away.
-------------