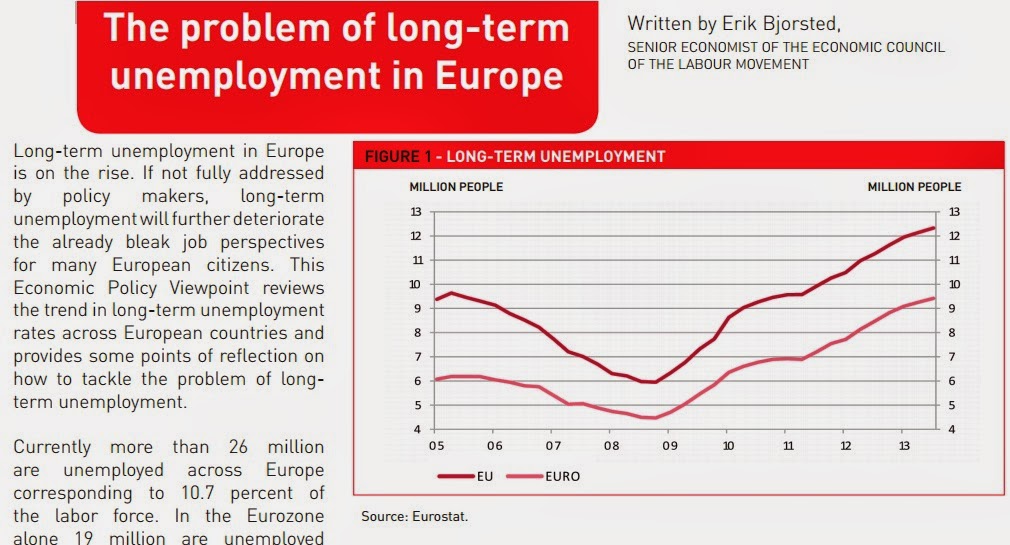 EU countries generally have rigid and strict labor policies, the  "exensive to hire, difficult to fire" policy. I like somehow the "flexicurity" policy in Denmark, sort of "easy to hire, easy to fire" labor policy, which actually works both for workers and employers.

Many European countries have those rigid "pro-labor" laws that make it difficult for employers to just fire workers. What do the employers do? They hire as few people as possible. Instead of hiring 3 or 5 workers, they hire only one. Give that one worker high salary, lots of trainings, travels, gadgets and car, nice housing and healthcare package, to keep his/her productivity high, and this worker will do the job of 3 or 5 people. He/she is lucky with all the high pay and many benefits. The others aspiring to be hired, sorry na lang sila. They can aspire to become start up entrepreneurs, hire themselves. But the business bureaucracy and multiple taxes, fees and mandatory contributions in Europe is not exactly something that many people would wish to experience.

And that largely explains why unemployment rate in France and many EU countries is always high.

The labor unions, they can demand as much as they can, like shorter than France's 35 hours work week, minimum wage of $50/hour, 4-5 months vacation leave with pay, and so on, and all their demands can become laws. There are several possibilities that can happen.

One, I mentioned above, employers will get as few workers as possible and get more robots and computers to assist those few hired workers. Two, some employers will simply shut down operation in Europe and move to Asia or Africa or S. America.

The best workers' antidote to capitalism is for them to become start up entrepreneurs and capitalists themselves. If their former employers will not give them $50/hour pay, 34 hours/week or less work, etc., they should give that to themselves, as entrepreneurs. Let us see if they can walk their talk.

And one thing I notice, the more productive, more ambitious, more hard working employees and staff are not interested in joining "strong" labor unions. Why? Because they have zero intention to become workers or employees forever. Rather, they intend to become start up entrepreneurs soon. They endure "slave work" like 12-14 hours a day (60-70 hours a week) because they learn more things, more details and more tricks, how big and successful companies operate. Or if they remain as employees, they move to multinational firms as mid-level managers and directors and they travel the region, if not the world.


It is those who intend to become workers forever that tend to gravitate to militant labor unionism.
-----------