This assumption is intrinsically wrong because it assumes that there is only one price in one country or city for each product that satisfies (a) and (b) conditions above.  For instance, the price of a can of coca cola 350 ml should be the same for the entire country.

This is terribly wrong. The price of that (a) same Coke 350 ml in can (b) made by the same manufacturer is different when bought in different retail outlets: a sari-sari store, carinderia, average resto, 7-11, Mini-Stop, SM, Rustans, Robinsons, Shangrila, Manila Hotel, Mandarin Hotel, and so on. There is no single price to represent the “national price” of that can of soda, or any other commodity. This can be said in another country with generally higher or lower price levels as the Philippines. This point can be represented by these graphs.

Each equilibrium price or intersection between supply and demand represents the prevailing price in each outlet. There are sellers and buyers in each equilibrium point. There is no single price, but different prices by different sellers for different consumers, for each country.

When the Senate in the 14th Congress (2007-2010) reported out Committee Report No. 6 made by three Committees -- Trade and Commerce, Health and Demography, Finance – dated October 01, 2007, before the Cheaper Medicines bill became a law (RA 9502 in June 2008), among the reasons cited is this table showing how expensive the prices of (a) same medicines (b) made by the same manufacturers in the Philippines were compared to those in India and Pakistan. 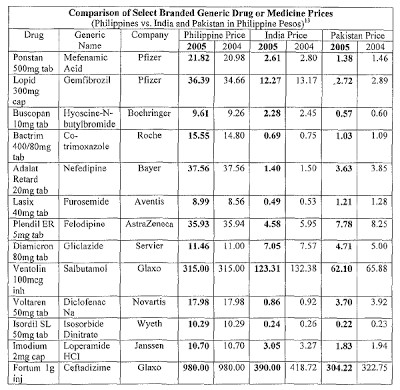 As in the example of coke above, there can never be one price of particular medicine in one country. If one will buy say, Ponstan 500 mg by Pfizer in different drugstores and pharmacies – Mercury, Watsons, Rose, The Generics, Generika, Manson, Dr.  Pharmacy, Botika ng Bayan, Makati Med, St. Lukes, Asian Hospital, Capitol Medical, etc. – one will get different prices. So  what is the “national price” that can represent the price of that drug in the Philippines? None. And yet the Committee Report has assumed there is such a thing for each country.

Besides, if one will make a meaningful price comparison of a particular commodity by country, then one must show:

(a) same or comparable retail outlet, say only from Watsons;
(b) same reference period, say December 30, 2012;
(c) exchange rate used for converting different currencies into a common currency, say PhP or US$, on a particular day, say as of end-December 30, 2012
(d) taxes and fees, national and local, applied on each commodity;
(e) subsidies or mandatory discount, if any, applied on each commodity;
(f) other factors.

These data and numbers should be shown for verification by third-party players or the public in general.  It is possible that the list of drugs mentioned in the Committee Report were those that are price-controlled (hence, priced very low) in India. Otherwise, anyone can produce a table of comparative prices, make agitating title and spread it around to achieve a particular political and business agenda.Take this second table for instance.

What are the difference/s and similarity/ies of the two tables above?

The difference is that the price gap between those in the Philippines and those in India and Pakistan are not that big.

The similarities are  that both tables  (a) assume there is one “national price” for each drug molecule by the same manufacturer, and (b) they do not show how the figures were arrived at.

The second table of course is hypothetical -- readers should not use it. I posted it simply to illustrate the point that unless the supporting data are shown and verified to be true as basis for comparison, people, policy makers and legislators especially, should be wary of accepting those numbers as basis for making public policies.

Meanwhile, the cat in my previous posting, Drug Price Control 33: Debate with a Cat has gone ballistic and really emotional, fuming with personal attacks. Well, low minds can stoop low and do ad hominems as replacement for producing hard data. Among the cat’s words are 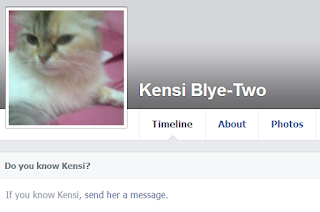 It would seem that the THINK TANKER has crossed the LINE... You're into "name-calling", now just so you can DIVERT the discussions from REAL ISSUES and go into the realm of PERSONALITY ATTACKS...? Alright, I'll play this game...

My profile picture is a CAT, yes.. A beautiful cat from Siam whilst your FACE looks like that of a WORN OUT "INTELLECTUAL WANNABE..." After all these years trying to make your own mark in the Policy Circles, you have not ACHIEVED anything SUBSTANTIAL you can call your OWN...

Awww! Well, for someone who supports drug price control or other statist proposals, the simple path would have been to show numbers and data – Prices of drugs (or other commodities) have not gone down, say from the time the law was enacted in 2008, to 2012. Show the charts, show the tables. Like this, 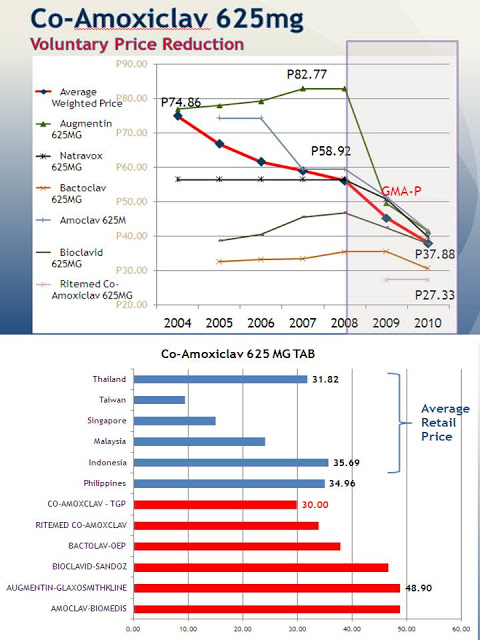 Then the debate is on the issue and not on ad hominem stupidity.

Pointless to debate with low level minds who cannot focus on substance, who cannot produce verifiable numbers, only  kilometric brickbats. 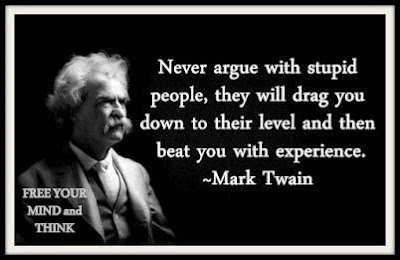 She made this warning,

“Mind you, I'm an expert when it comes to NAME-CALLING and PERSONALITY ATTACKS, you might cry if you ENGAGE ME...”