Pol. Ideology 42: Anarchy is Impossible Even in Theory

I posted my earlier paper on Minarchy or Anarchy, in the facebook group, Ayn Rand Fans in the Philippines. it attracted comments from some friends. Here are some of our exchanges with some friends. The photo below, I got it from the web and just added it here.
-------------


Mike: Call it what u want. i call it self-governance! cheers we just hit the wall.

Nonoy Oplas Yes, self governance is civil society. Parents, siblings, relatives, classmates, friends, officemates, NGOs, churches, media, private enterprises. The main debate is on promulgating the rule of law, if it can be totally private or civil society. Usually, the main arbitrator in dispute among people is not government but civil society. Like the village association in cases of disputes among neighbors (his dogs bark too loud, his karaoke is too loud too often, etc.). Or referees in cases of sports competition.

But when the civil society arbitration system fails, say one party is unhappy with the ruling of the private arbitrator and resorts to physical violence and brings along his armed friends or clans, that is where a higher arbitrator, the courts, plus the police, can step in.

What is problematic with the anarchist position is that people should not, should never, engage (polidy dialogue, congressional healings, join elections, etc.) with government because such actions only legitimizes an illegitimate entity. So government creates new bureaucracies and new taxes to finance those new offices via legislation, and they are nowhere to be found because they are not supposed to engage with government whatsoever. They are holed in one conference room or chat room and they complain why government keeps expanding.

Should a society fall into anarchism, what would prevent some fringe groups (like those who advocate socialism or fascism or Islamic theocracy, etc.) from forming their own governments, since it is impossible for every individual to embrace Libertarianism overnight? Perhaps the an-caps' answer would be: The markets will magically solve all problems. Well, the markets are governed by systems and people make or invent systems.

For a society to perfectly maintain an an-cap society, all its social members must embrace Libertarianism. Even Ludwig von Mises rejected anarchism by calling anarchists "shallow-minded", "dull", [and suffer from] "illusions and self-deception".

I joined an FB group called 'Small-L Libertarianism' two years ago and I debated with its an-cap members. I posted anti-anarchism quotations by Mises and one an-cap accused me of name-calling LOL.

Nonoy Oplas My co-debater there, David S., initially posted about the move by Sweden to cut corporate income tax from 26.2 to 22%, so I asked why an anarchist would support such move when their goal is zero government, zero tax.

A hypothetical case: Congress is deliberating on a new bill creating a new department or ministry that will cost taxpayers say $50 billion a year at least, and revenue measures like rise in certain taxes and regulatory fees, are included in that bill. Since the policy of the anarchists is "never engage government, do not recognize an illegitimate entity", so they are out of public hearings. The room is dominated by statists and socialists, some would even propose that the price tag of that new department should be $75 billion a year, not just $50 B. That bill later becomes a law. The bureaucracy has expanded, the taxes have increased, and the anarchists are back into complaining why government keeps expanding. It is a lousy attitude.

Froi D. Vincenton Like Harry Binswanger said: "Are we to assume that the country will have been converted to "libertarianism" before anarchism is instituted?" 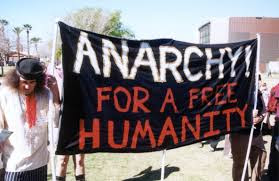 Nonoy Oplas Anarchy, zero authority, zero government, zero coercion, is impossible even in theory. Coercion is everywhere, happens at the micro and household level, it's just a matter of degree. Examples:

1. Parents who force their kids to stop watching too much tv or youtube and force them to study at night is practicing coercion.

2. Clans who disown a family member for marrying someone outside a specified clan is practicing coercion.

3. Residential condo owners who disallow dogs or other pets inside the building is practicing coercion. There are penalties for violating their rules.

4. A cycling club or rotary club that kicks out members who do not pay their annual dues are practicing coercion, there are penalties for not following club rules.

So coercion is everywhere, they just differ in degree. Thus, a zero coercion, zero government society is impossible. We have to live with certain degree of coercion. When the state declares, "No killing, no murder, no stealing", that is coercion, a kind of coercion that actually expands our individual freedom. We can live with our lives with little or zero fear that any criminal can just shoot and stab us or our family members and friends for no reason at all, if the state will stick to its core function of protecting the rule of law.

I understand the primacy they put on private, voluntary, and civil society mechanisms to settle disputes among individuals or groups of individuals, say between or among huge clans or tribes or political associatons and groups. I believe in such mechanism actually. But there are instances that such mechanism can fail when one group will dishonor the decision or ruling of the private arbitration system and resorts to physical violence or other forms of crime.