A friend, Stephen Cutler, called my attention to this press statement by US Ambassador to the Philippines, Harry Thomas, Jr. In a message , Congratulations, Philippines: Raising the Bar on ExtractiveResources Transparency and Accountability, the Ambassador said,

…  On May 22, I was pleased to see the Philippines became a candidate member at the latest Extractive Industries Transparency Initiative (EITI) Global Conference held in Sydney, Australia.   EITI is a voluntary international system through which governments reaffirm their commitment to accountability and transparency for their country’s oil, gas, and mining industries. By working together, the government, private sector, and civil society are achieving broader agreement on higher standards for the extractive industry.

The concept behind EITI is simple. Member governments partner with the private sector and civil society organizations to publish an annual report that compares two figures: revenues that the government reports it received, with what extractive companies report they have paid for their oil, gas, and mining activities. This system incentivizes honesty and provides data necessary for accountability.

… at the latest EITI Conference recently held in Sydney, members formally agreed on a set of strategic changes to EITI.

The aim is to make EITI reporting more comprehensive, reliable, and easier to analyze. The reforms will also require governments to provide citizens basic information about the extractives sector in their country, including what licenses have been awarded and to whom, how much is being produced, and the role of state-owned oil companies in the sector.  In addition, EITI will encourage governments to voluntarily go one step further by publishing their actual contracts with companies. Transparency benefits U.S. companies because it helps them to better understand a country’s operating environment as they consider investment decisions.


This is a good development. Not only payment and collections will be published and made transparent, but also existing and new contracts entered by governments. Meaning if there are mining or oil drilling operations and they are not found in the EITI website (http://eiti.org/), that means these are illegal or unauthorized or under-reported activities.

I checked the EITI website, one report there says: 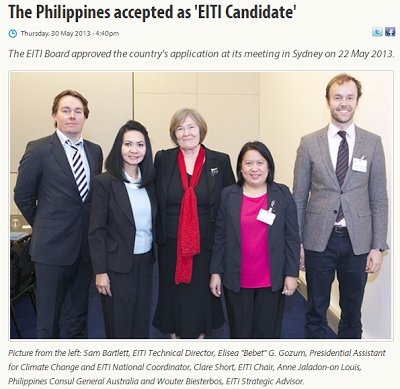 … The decision of the Board on the status of the Philippines in full:

As an EITI Candidate country, the Philippines has to start disclosing payments from its extractives sector, and meet all the requirements in the EITI standard within 2.5 years to become EITI Compliant.

Two and a half years before the Philippines -- government and the mining and oil companies here -- can become EITI Compliant (or a member?), this is a good opportunity to unmask certain hypocrisies by the Philippine government. The government, national and local units, usually say they welcome big investors to create lots of jobs here, responsible mining and extraction of resources, then puts up lots of regulations, restrictions and prohibitions. As if wishing that only angels, not humans, should engage in mining and other extractive activities.

EITI membership will force the Philippines and other governments to declare publicly how much they (both national and local government units) have collected (taxes, fees, fines and mandatory contributions) from the extractive companies, and the latter will declare how much they have paid to the government. I wish these companies will also declare how much they paid to expensive law firms and accounting firms, just to make sure they have properly complied with various government agencies (city government, provincial government, BIR, SEC, MGB-DENR, DOLE, DOH, etc.) for various taxation, labor, health, environmental standards, and avoid punitive penalties. When regulations are too many, the cost of compliance can be as big if not bigger than the actual taxes paid.
----------------