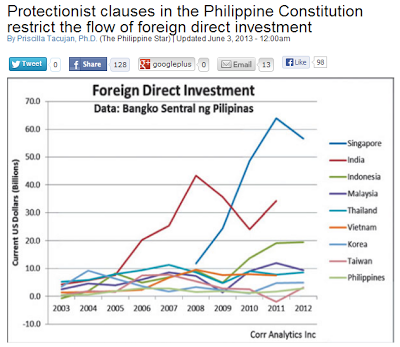 A friend, Priscilla Tacujan, wrote a good article published today in the Philippine Star, about economic nationalism in the Philippine Constitution. I shared it in my facebook wall and it attracted a good exchange between me and Stephen P. Cutler, an American security analyst based here in Manila. Posting our exchange with his permission, thanks a lot Steve.
--------


Stephen P. Cutler Nonoy Oplas, thanks for posting. I've heard another, possibly even more damaging effect of the protectionist clauses. The prohibition against foreigners obtaining licenses for professions reduces the growth and skills development brought about by healthy competition. Architects, engineers, lawyers, and the medical profession know that they can be comfortable and complacent in competing only against local talent. They don't have an economic incentive to be among the best in the world. Some strive for that, but the market doesn't reward their efforts since they are too few. Many of the great powers in the world actively seek the honing and sharpening that comes from competitions. That virtually forces improvement among practitioners.

Nonoy Oplas Correct Steve. Lots of hypocrisy in this country, even among the professionals. Filipino doctors and nurses can practice in the US, UK, Canada, Australia, etc. so long as they pass qualifying exams or they get direct hiring, but doctors and nurses there cannot practice here. The same goes for almost all other professions (engineers, dentists, lawyers,...).

On another note, our session in the recently concluded international conference, "Jeju Forum for Peace and Prosperity" in S. Korea, dealt with economic nationalism and why it is wrong,

Report from our session in Jeju Forum: Economic Prosperity in Asia: Dealing with Economic...
www.efnasia.org

Stephen P. Cutler I recall the loud clamor when a member of the District of Columbia City Council, equivalent to a Kagawad, tried to get more funding for training of people in his district for nursing jobs. He noted that the local hospital wasn't hiring locals, but had to hire a lot of Filipino nurses for the job openings. He was condemned by the Philippine Ambassador and many many others as racist against the Filipinos. If the Councilman had been smart, he'd have asked for an nurse exchange program with the Philippines. That's impossible of course since U.S. people can't be licensed nurses here. That said, the professionals CAN work here, under the guidance and oversight of a locally licensed professional. Thus, the local gets a slice of the fees, and do no real work at all.

Nonoy Oplas Economic protectionism -- against foreign goods and services (professionals) -- is exposed more in our daily lives. Many Filipinos oppose free trade, they want "fair trade" aka protectionism. But many Filipinos benefit from unilateral free trade policy of HK -- no trade negotiations, no hiring of hundreds of trade bureaucrats and trade consultants with hundreds of junkets all over the world (and cost lots of taxpayers money). In HK, all goods are welcome, zero tariff, only local taxes apply. The only goods that are regulated if not prohibited, are those that can harm lives like bombs, guns, poisonous substances, fake medicines, contaminated food and drinks. PH-HK-PH flights could be as high as 30 a day to include flights from NAIA (terminals 1-3), Clark, Cebu, Davao, Iloilo, Kalibo, etc.. The beauty of unilateral free trade yet people lambast free trade.

Stephen P. Cutler Many folks here have such a low opinion of themselves and other Filipinos that they believe we can't compete on the world stage, except for domestic helpers. That's a sad statement, because the underlying foundation is false. Many OFW's in Taiwan and the U.S. and elsewhere are professionals in computers and data management, engineering and so on, and are highly sought after. Free trade will lead to an even more vibrant labor sector. Our people are competent for the world stage. Open it up and let them compete, without having to leave home.

Nonoy Oplas Yes, the enemy within. People who love competition in sports and politics and politicians, yet hate competition in the economy. People who lambast free trade and free market yet hug the free market (if you don't like the price, leave and look for another seller) and bargain prices of Divisoria, Baclaran and tiangge0tiangge. People who lambast capitalism and yet use facebook, twitter and youtube -- ALL are products of capitalism -- for their anti-capitalism paranoia. People who lambast mining and yet do not want to live in caves, who want to enjoy electricity, cell phones, laptops, cars, buses, buildings, etc., ALL of which, zero exception, are products of mining.

That is why I never believe central planning and the central planners. Them in high authority and with PhDs who over-estimate themselves and think they can know and plan things for everybody else. Societies progress because of diversity and spontaneity, innovation and products revolution, never of monotony and central planning.

Meanwhile, here's from our Indian free market friend, Barun Mitra, who was among the discussants in our panel on "Dealing with Economic Nationalism" at the Jeju Forum:

India is not known for manufacturing, more for IT. Perhaps the only country manufacturing automobiles in the 40s after Japan, yet how many Indian car brands do we hear now. Today local car manufacturers survive only because of government support. The infant industry argument only resulted in cronyism.

IT not protected or subsidized, even completely neglected, and they prospered. About 80 percent of our IT products are for exports. Free trade is fair trade. Two sides agree, a win win situation, benefits both buyers and sellers. Economic nationalism is used by politicians to secure themselves. Losers are the people."

Stephen P. Cutler Mitra has some good insights. Tata is a huge company, but doesn't have to go outside India. Tata likely cannot compete with its current product line,which is built for standards that are for the Indian masses, and thus low standard. It doesn't have to be that way.

Go ahead and quote. No problem. Thanks

Nonoy Oplas Thanks Steve. Despite economic protectionism of the PH Constitution, there are some good policies that were innovated, like the FTAA scheme in mining that allows up to 100 percent foreign ownership of mining companies. But the case of Tampakan-SMI shows that while the Consti can be "tweaked", local politicians and bureaucracy, politics of envy, can be a bigger enemy. A company that has passed all the requirements by MGB-DENR, SEC, DTI, BIR, etc., can be stopped from operation by a provincial government.

Also, despite continued consti protectionism, some sectors in the economy simply are not giving up, they grow despite bureaucratism and the politics of envy, PH 1st quarter 2013 growth now the highest among emerging economies and the industrialized world, http://www.interaksyon.com/business/63079/fat-free-economics--economic-growth-and-population-growth