As the new Congress will officially convene in late July this year, various sectors and government agencies are preparing their respective “legislative agenda”, the things they want Congress to enact for their sector. And among the sectors seeking a new law is the mining sector, about the proposed new mining tax regime.

The move now is to replace the (a) corporate income tax, 30 percent of net revenues, (b) excise tax, two percent of minerals value, (c) royalty tax to indigenous people, five percent, plus several others, with a 10 percent gross revenue tax.

It is not clear though what to do with these taxes imposed on companies, most likely they will be retained: capital gains tax, documentary stamp tax, value added tax, tax on interest income and payment, vehicle registration tax, real property tax, community tax. And the various regulatory fees -- occupational fee, business permit fees, registration fee, etc.

This 10 percent tax seems big as there are many other costs to consider, like (a) labor wages, benefits and social insurance, (b) mandatory community projects/CSR, (c) capex and machinery, trucks depreciation, (d) insurance against natural accidents (heavy flooding, landslides) and man-made terror (NPA attacks, other armed groups), (e) various maintenance and operating expenses (fuel for trucks, electricity and equipment for offices, etc.), (f) mining rehabilitation and reforestation of mined out areas, (g) other taxes and regulatory fees by local and national government units.

The advantage here is that things should be made simpler and more transparent. It is up to the metallic mining companies to cut costs somewhere, like getting more fuel-efficient trucks and bulldozers, so that a reasonable or attractive profit can be realized for the various investors and shareholders of the companies.

Real debates will occur in Congress, in various Committee hearings, as the hardline "No mining whatsoever" and "Allow mining but over-tax and over-bureaucratize it" groups will mix with the more realistic groups.

There were several news reports recently on the proposed new mining taxation policy in the country. I saw these four stories from the Philippine Star, BusinessWorld, Philippine Daily Inquirer, and Mining.Com. 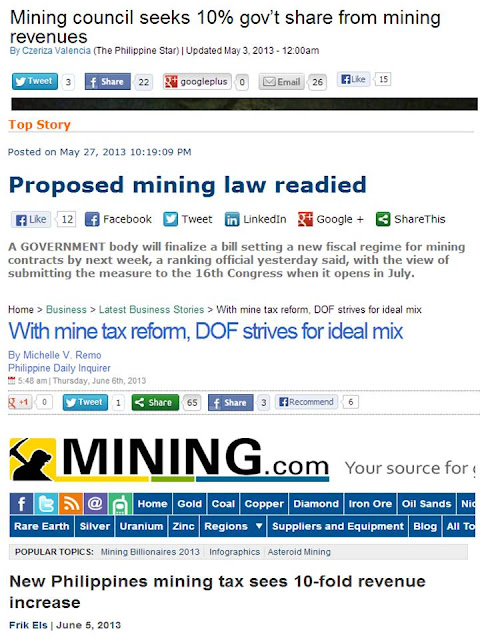 Environment Secretary Ramon Paje, who co-chairs the MICC, told reporters yesterday that the draft bill prepared by MICC stipulates a government share of seven to 10 percent to be obtained from gross earnings and windfall earnings of mining firms.

The enlarged government share from mining revenues would replace the two percent excise tax as well as other taxes imposed on mining firms such as corporate income tax, customs duties and fees on imported capital equipment among others.

Paje said that of the proposed range of government share from mining revenues, the bulk should ideally come from gross revenues so that the government would have a guaranteed income should the company not have windfall earnings.

“If we use the 10 percent sharing scheme, for instance, we can get seven percent from the gross and we have already achieved our objective. The three percent can come from windfall income. Whatever percentage we use we are more inclined on the gross,” he said.

He said that using this revenue sharing scheme, the government could reap P10 billion annually from the current average of P800 million annually.

Mr. Paje said the MICC wanted a single, simplified regime applicable to all types of mining agreements, adding that whether or not this will be retroactive depends on Congress.


The MGB chief, however, yesterday said the 10% raised by Mr. Paje was just part of the "discussion points."

"The only thing that’s final right now is that the revenue-sharing scheme will be based partly on the gross sale. We want this sharing option to be less subject to discretion," Mr. Jasareno said.

"Basing the sharing on gross sale means that whether or not the mine is profiting, the government will always have a share."

"Rationalization measures for small-scale mining are under way, such as the revision of the implementing rules and regulation of RA 7076, or the People’s Small Scale Mining Act of 1991 and the identification of people’s small- scale mining areas or minahang bayan," he added.

"A draft IRR (implementing rules and regulations) for RA 7076 will be presented to MICC, which if approved will be signed into an AO (administrative order)."

“We are working with stakeholders to determine the appropriate balance, or ‘sweet spot,’ that will attract mining investments while ensuring a sustainable fair share of mining revenue [for the government], with due consideration to social and environmental aspects,” Purisima told the Inquirer.

Apart from the 2-percent excise tax, mining companies in the country must also pay a 5-percent royalty tax if their operations are located in the property of indigenous people. The national government gets 60 percent of the tax proceeds while the rest goes to the local government unit concerned.

Mining firms in the country spend around P11 billion a year for national and local taxes, according to estimates.

The DOF is also studying whether it would be better to scrap the royalty tax and raise the excise tax by a commensurate margin instead.

But the removal of the royalty fee will mean that LGUs of indigenous communities may no longer collect their 40-percent share in the tax revenue.

The government will also insist on applying the tax on the gross value of each mining company’s output, which will be computed using monthly trading averages for gold, copper and other precious metals at the London Metals Exchange. “The formula will be based on prevailing prices rather than actual transaction value to avoid the complications caused by hedging and other factors,” Paje said….

Apart from the new excise regime, the Philippines also envisages windfall taxes when commodity prices are high and the current system of local governments collecting property taxes from mining firms will stay in place, subject to caps on yearly increases….

Never that high to begin with, investment in the island nation now attracts less than $500 million worth of  mining investment. The preliminary 2012 figure was down from nearly $1 billion in 2010 and $625 million in 2011 according to government data.

The archipelago is rich in copper, gold, silver and chromium and at the moment produces more than 10% of the world's nickel, but minerals make up only 8% of its exports.

Projects like Tampakan, should it eventually go ahead, could transform the industry: It is a 2.4 billion tonne deposit, containing 13.5 tonnes of copper and 15.8 million ounces of gold.