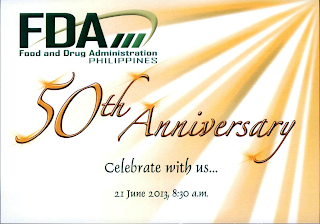 Today, the Food and Drug Administration (FDA) will celebrate its 50th Anniversary at its office in Alabang. Congratulations, FDA Director Dr. Kenneth Hartigan-Go and staff.

Doc KHG has a new slogan, a "Transformative FDA" where they are "finding the balance between innovations and sound regulations."

I think it is a good and simple goal. Encouraging innovations while weeding out the not-so-good guys among the players via regulations and penalties for violation of certain rules.

Last Monday, June 17, FDA held a training seminar for its top officials and decision makers from different centers and offices, with resource speakers from the Board of Investments (BOI, DTI) and the Bureau of Customs (BOC, DOF). The goal of the training and discussion is to further develop FDA as an "agency that is conscious of its important role in facilitating trade of goods and services as well as in promoting investment in the country.... securing public health (and) be a more trade and investment-friendly agency in order to support growth and development of the industry, promote national competitiveness and sustain economic gains of the country." 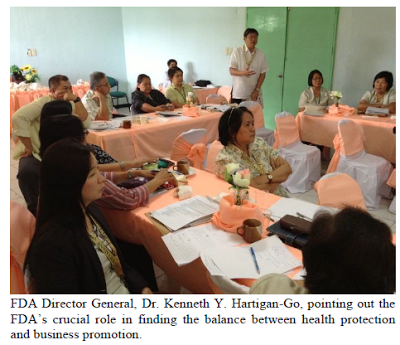 r. Villanueva,  focused on "Ease of Doing Business, discussing the importance of time, cost, and documents as far as business registration is concerned."

Bureaucratic regulations are realities happening almost anywhere in the planet that we have to live with. If kept to the minimum, such regulations and prohibitions will drastically help reduce unethical or abusive business practices that can disadvantage consumers as both the players/regulated and the regulator can easily remember only a few regulations, not dozens or hundreds of them. 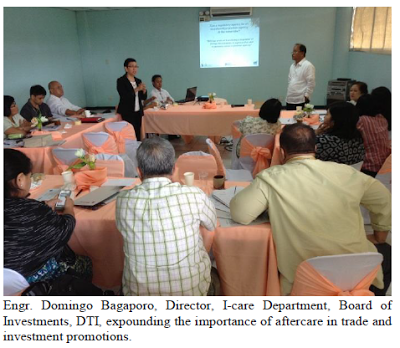 One important precondition for the rule of law to prevail is that the laws and regulations should be as general (ie, not so detailed) in application and as few as possible in number. To promote economic freedom and more entrepreneurship, more job creation, everything should be allowed, except for a few expressly and explicitly prohibited acts like stealing, killing, abduction, explicit plan to fool the consumers, and a few others. The penalties should be very clear and should apply to all violators, no one is exempted and no one can grant an exemption. That is the essence of the rule of law.

In the case of the FDA, its main function is to allow and encourage the entry of more players, manufacturers, distributors and retailers, who will give the public more useful food, drinks and medicines at competitive prices, and weed out players that produce and sell products that can be harmful to the people. This way, public health will be further promoted.

It is important for the FDA to have a strong legal team that can prosecute at a short period of time those caught violating its rules and regulations. Or at least, it should have strong tie up with the Department of Justice, the police and the courts, so that legal cases against violators or plain suspects can be pushed with little or no delay.

This act alone will encourage the entry of more players both from abroad and from local entrepreneurs, to enter the food and drugs business, as they see the equal application of the law to unequal people and players, and the opportunist and shrewd among them will be culled and removed.