Drug Innovation 13: Why Expensive Cancer Drugs Are Cost-Saving After All

When I read this article, I thought this is like a home run hit, all three bases covered and back to the home base. Well written, data well-provided, and arguments well-organized. A heretic but truthful argument. Published in Forbes.com last Monday, June 10. Enjoy.
--------- 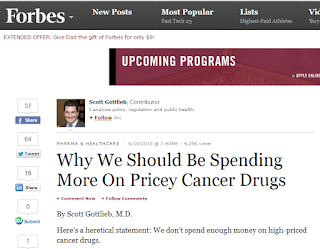 Why We Should be Spending More on Pricey Cancer Drugs

In recent months, there have been provocative editorials by leading academic cancer doctorsarguing that the price of many new cancer drugs is too high.

But what if the high price of new drugs is a reflection of the value that these medicines bring to not only individual patients, but also our healthcare system?

Doctors can reject the early data available at the time of initial FDA approval of a particular drug. They can rightly use their discretion to prescribe an older, cheaper medicine over a costlier alternative that hasn’t decisively proven is superiority.

But it’s harder to argue that we’re not getting real, overall progress for the price we’re paying. Not only in terms of better clinical outcomes, but cheaper care, as expensive drugs reduce the need for even costlier hospitalizations.

Although very costly, total spending on oncology care (as a percentage of our $2.7 trillion national healthcare budget) has been remarkably constant over the last 20 years, at just less than 5% of total healthcare spending (and about .8% of U.S. GDP).

But the mix of expenditure has changed dramatically over time. Far less money is being spent on services like hospitalizations, and far more on outpatient medicines.

Cancer treatments that used to make patients very sick and require costly hospitalizations have been replaced with targeted drugs that can allow patients to be more easily treated at home. Part of the shift to outpatient treatment was driven by economic incentives that made it more profitable to prescribe cancer drugs in doctors’ offices. But this shift was also driven by the wider use of less toxic, more effective medicines that could be safely administered in doctors’ offices.

The proportion of spending on inpatient cancer admissions fell from 64% of total cancer spending in 1987 to 27% in 2001-2005 according to studies. A good review of this data can be found in ananalysis published in the journal Oncology.

Here’s what’s happened: The transfer of cancer care to the outpatient setting has produced substantial savings. It’s cheaper to deliver care outside the hospital, in doctor offices. This is certainly true for inpatient care. It also applies to outpatient care delivered in hospital-based clinics. One study by Avalere Health that examined three years of health claims data found (after adjusting for other variables) that the average cost of an office-based episode of cancer care was about $28,000 compared with $35,000 for a hospital outpatient department – a difference of 24%.

But most of those savings have been consumed by the higher cost of the drugs, leaving the proportion of overall spending on cancer care largely flat. This transformation in care has similarly changed the business of oncology. It has boosted profits at the drug makers, but come at the expense of academic hospitals.

These trends, from the inpatient to outpatient care of cancer, shouldn’t obscure the fact that the high costs of the new drugs create many hardships for individual patients. When a drug has a price tag of $100,000 for a single round of treatment it can saddle patients with substantial costs as a result of the required co-payments.

But this is as much a problem with insurance schemes as it is with the price of the drugs. Most of us treat health insurance as pre-paid medical care, and are over-insured for routine matters, and under-insured for catastrophic illness like cancer.

Moreover, most insurance plans cover hospital admissions far better than they cover care delivered in the community, especially specialty drugs. To realize the savings that come with shifting care out of acute facilities and into homes, this incongruity in how insurance schemes are structured must be fixed.

If a drug improves outcomes and lowers costs (by shifting care from inpatient to outpatient settings) then that value will get baked into the price of the medicine.

The cancer drugs get a lot of focus not only because of the high and easily quantified prices, but also the growth in those costs. Spending on cancer drugs rose at an annual rate of 6% between 2007 and 2011. But it’s still a small component of total costs. Aggregate spending on cancer drugs is only about .8% of our total healthcare budget. So even as it grows, its impact will be subtle. Of that .8%, a little less than half is spent on the old-line, and much cheaper generic chemotherapies.

Worldwide, in 2002 about $7.6 billion was spent on old chemotherapy drugs (cytotoxic agents) while $2.0 billion was spent on newer, targeted medicines. By 2012, global spending on the targeted drugs totaled $32.7 billion, while the proportion spent worldwide on cytotoxic medicines was $19.8 billion. So the newer, costlier drugs are only a fraction of a fraction of spending — around the world.

Studies show that the most significant driver in cancer costs in recent years is the increased number of people living with the disease, not the cost of treating each patient. It’s not the drugs, but the people that the drugs are keeping alive longer.

Finally, cancer drug prices have seemed to reach a tenuous plateau. New drug entrants are being priced off existing medicines. With more new drugs in development, and competing drugs available to treat many conditions, the drug makers are being more cautious in how they price products. Companies are still taking price increases. But the market has become much more competitive.

That’s not a reason to ignore these costs, and the prices. But the fact is that market forces (where permitted) are putting downward pressure on prices, and spending.

Utilization is being rationalized by the introduction of diagnostic tests that allow doctors to target drug regimens more effectively. Doctors are being held more accountable for the cost of care. Competition is allowing health plans to extract discounts from drug makers, even around specialty drugs (although a lot of these savings are going to profits at the PBMs rather than being passed on to consumers).

The biggest drivers of higher costs may be the structure of the specialty tier in Medicare’s Part D Prescription Drug benefit, and Medicare’s Part B program that reimburses for drugs infused in doctors’ offices. Each discourages price competition.

Finally, the high initial price of new cancer drugs is also reflection of government rules that make prices for drugs very sticky. Drug companies know that they won’t be able to significantly raise prices later, even if they have more data demonstrating a drug’s long-term benefits. Medicare’s reimbursement rules make big prices increases very hard. The program was designed to prevent this sort of activity.

So drug companies have to try and price drugs as high as possible when the medicines first hit the market. Companies know that even if their new drugs show substantially more benefits in subsequent trials, firms won’t be able to re-price the medicines later. If government rules made it easier for drug manufacturers to re-price medicines after their initial launch, then drug prices might more closely track the value demonstrated by the accruing data about a medicine’s clinical benefits.

So do we spend too much on cancer drugs?

Medical trends show that the cost of shifting cancer care from the hospitals to the community has produced many benefits, and a lot of offsetting savings. High cost drugs save money on other services, and have generated significant gains in health along the way, especially for diseases like lymphoma, breast and colon cancer.

Take breast cancer. Since 1975, annual death rates have declined from 31 deaths per 100,000 American women to 21 deaths. Five-year survival for newly diagnosed cases has gone from 75% to 90%. Better screening has played a role, but so have the introduction of better and more targeted, more effective drugs.

The price tag of new medicines isn’t trivial, nor is the high cost of treating cancer. But the clinical and economic data shows that when it comes to technological advances and new drugs, we continue to get increasingly more for our money.