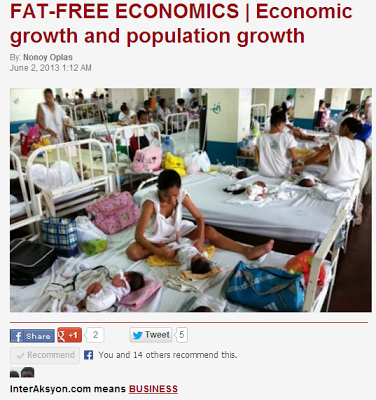 If the 6.8 percent GDP growth in the first quarter of 2012 struck some as incredible, then imagine what they must be saying now about the 7.8 percent expansion in the first three months of this year. Suspending disbelief for a moment, the major contributors to this year’s growth feat have been encircled in the tables below. 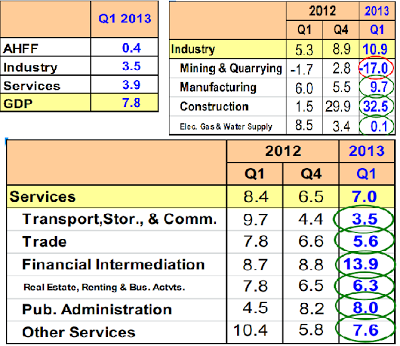 A government moratorium on new permits has punched a deep hole in the mining sector, resulting in its deep output contraction. But this didn’t prevent the industry sector from turning in high growth. And what were responsible for this? First is construction, both government and private sector.

The big number of cranes on tall structures that work day and night in many parts of Metro Manila and in other big cities in the provinces are a testament to fast growth in private construction.

Some people argue that the growth was not impressive because it was driven by election-related spending. How true is this claim? Let us check the numbers. 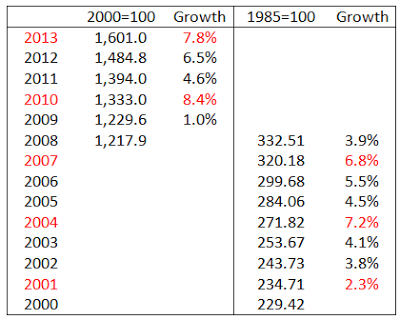 Of the past five election years marked in red, growth was indeed high in four of them. In 2001 though, the political instability that accompanied the downfall of then President Joseph Estrada slowed down economic activity.

So assuming that the country’s GDP growth in the first quarter of this year was “over-rated, exaggerated, meaningless,” wouldn’t this show up when we stack our performance against that of other countries? Let’s see the data in the table below. 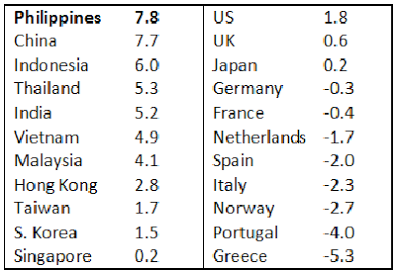 All the developed and “tiger economies” of East Asia – Japan, South Korea, Taiwan, Hong Kong and Singapore – grew ever so slowly. But at least they escaped the contraction that has befallen European economies. The entire Euro area has an average of -1 percent change in output in the first quarter of this year.

The current global economic condition and short-term outlook is not good. Slow growth in the US, Japan and other Asian tigers, and contraction in Europe. The emerging economies of Asia, including the Philippines, are showing promising growth.

There is one notable factor for the rather fast growth of these Asian emerging economies -- China, India, Indonesia, Philippines, Thailand and Vietnam -- they all have high population growth rates. Pakistan has yet to release its first-quarter GDP data, but its 2012 growth was 4.2 percent, comparable to that of Malaysia.

As for those countries where growth has slowed or the economy has contracted, they have one thing in common: greying populations. Public spending is high for healthcare, pension and other services for the big number of senior citizens relative to their total population. Many of such spending is not covered by domestic revenues, so those governments keep borrowing huge amounts of money, which negatively affect their overall fiscal condition amid high interest payments, which is passed on to the rest of the economy in the form of a low or even negative business outlook.
----------------