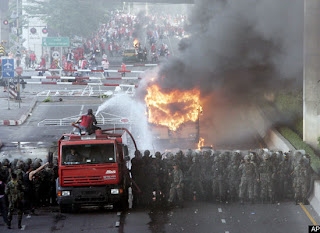 My friend from Bangkok made this observation. I cannot give his name because of security reasons due to the continuing military crackdown in Bangkok until this week.
-----

The Democrat government came into power in December 2008 by rigging Parliament. About two week earlier, the People's Power Party (PPP) was disbanded by the Constitutional Court on the charge of election rigging, resulting in PM Somchai being disqualified and his cabinet dissolved. This happened amidst the seizure of the Government House and the two international airports by PAD. And even before that, in September 2008, PM Samak of the PPP was disqualified by this same Constitutional Court for a wrongdoing (i.e., making a cooking TV show!!!). The logic is clear: You win the election, but I use the judiciary power to destroy you and negate the will of the majority of the people!

Just days after the dissolution of the Somchai government and two days before the King's birthday, PAD abandoned the Government House and the airports.

The former PPP members tried to regroup and set up a new party, namely Peur Thai (For Thai) Party (PTP). But the military intervened and forced a large shunk of former PPP members to split and gave support to the Democrat Party Chief, Abhisit. So he became PM. And the PTP became the opposition. This was a 'silent' coup d'etat. The Abhisit government is a mere puppet, backed up the military under the skin of parliamentary democracy.

The Abhisit government is actually the PAD government. They gave support to PAD in taking over the Government House and the international airports. The Democrat Party members were part of PAD. One of PAD leaders is a Democrat member of parliament (MP). Three of PAD leaders got high-positioned jobs in the Abhisit government, one of them being Foreign Affairs Minister! The Democrats provided finance, personnel and mobilizing networks for PAD throughout, whereas both PAD and the Democrats, like the military and the judiciary, are just the arms of autocracy! You will NEVER see the prosecution of PAD leaders for all their crimes.

The red-shirts' originial intention of going to Pattaya on Friday 10 April was to present a message to ASEAN leaders that the Abhisit government was illegitimate. But, on the way back downhill from the hotel, the red-shirts were ambushed by a blue-shirt gang organized by government politicians and the Democrats in Chon Buri. Several red-shirts were hurt from beating and slingshots, two of them seriously injured by a pingpong bomb. The news reached the red-shirts in Bangkok. Everyone was angry. So more red-shirts were mobilized from Bangkok to arrive in Pattaya in the early morning of Saturday 11 April. They went back to the hotel and demanded that the government took responsibility for the attack. But there was no answer. The red-shirts became even more angry. They stormed the hotel and broke up the ASEAN summit. The red-shirts in Pattaya were unarmed. Of course, they picked up some sticks and stone when they encountered a blue-shirt gang again on the way back from the hotel that
same afternoon.

The Abhisit government, losing face and credibility, decided to use force to suppress the red-shirt protest in Bangkok. So Abhisit declared the state of emergency in the area of Bangkok and five surrounding provinces on Sunday 12 April. The violent crash at the Ministry of Interior on that day happened AFTER the declaration of the state of emergency. The red-shirts went to Ministry of Interior because they knew that Abhisit was there. After shouting, pushing and shoving by the red-shirts, the black car (NOT Abhisit's), trying to move away, accidentaly hit one red-shirt. The red-shirts were angry and began to attack the car. Then, a security guard open fires and at least two red-shirts were severely injured. More crashes in Ministry's compound followed.

The troop started to move in from the North of Bangkok in the early morning of Monday 13 April. At around 4:30 am, the soldiers open fires at a small group of red-shirt guards at Din Daeng. Several people were killed instantly and several dozen were injured. Then the troop drove the red-shirts towards the Victory Monument and beyond. Several crashes followed. The soldiers kept shooting at those red-shirts. Many more were killed and injured. Red-shirts gradually retreated and finally regrouped at the main protest venue in front of the Government House. The armed gangs organized by government politicians roamed the streets and beat up any red-shirts they met and several were beaten to death.

The troop surrounded the red-shirt protesters in front of the Government House from all sides. Behind them were armed blue-shirt and plaincloth gangs organized by government politicians. TVs and the media showed hate messages and negative reports against the red-shirts throughout 13-14 April. They planned a remaking of the 6 October 1976 Student Massacre in the afternoon of Tuesday 14 April. At the last minute, there were around 8,000-10,000 red-shirts in front of the Government House. But, at 11:30 am of 14 April, the red-shirt leaders announced to "suspend" the protest and negotiated with the police to allow red-shirt people to go home unharmed. Five leaders were arrested immediately and are now jailed in military compounds around Bangkok. Around 20-25 arrest warrants have been issued to wipe out the whole lot of red-shirt leaders in one go. They are now seeking the charge of "high treason" (punishable by death) against the whole group. They expect the red-shirts, without leaders, will not be able to launch a new movement in the future. Then provincial red-shirts will be dissolved by the security network later on.

One point must be emphasized. The press and the media, particularly TVs, have been strictly censored and controlled by the government as a result of the state of emergency. So all reports are one-sided and are mostly propaganda. The government's insistence that there were no serious casualties is a lie. Soldiers are still stationed in the streets. The situation now is like a rule by a military government with the face of Abhisit on it. It is actually another military coup.
Posted by Bienvenido Oplas Jr at 11:13 PM