Rule of Law 4: On Thailand Crackdown 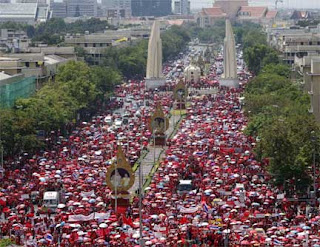 Rule of law is perhaps the single biggest assurance of individuals to protect their liberty. This is because the principle explicitly specifies that "the law applies to everyone, rulers and ruled, no exception". The law applies equally to unequal people. So when the law says "no stealing", then no stealing should be allowed, either by a destitute and hungry man or by the President or Prime Minster of a country. When the law says "no killing", then no killing should be done, either by a hardened criminal or an ordinary man or by the military and the police, if there is no direct threat to them.

This makes the rule of law a dangerous principle and policy – dangerous to thieves and robbers, tyrants and dictators, liars and demagogues. Because whatever regulations and prohibitions they create will also apply to them, will also restrict them.

The continuing political instability in Thailand is another example of trampling of the rule of law principle. Of rulers and law implementers having discretionary power to decide whom the laws and prohibitions will apply, and to whom the laws will be relaxed and not implemented.

A few months ago, anti-Thaksin groups, particularly PAD and the Democratic Party who are now in government, blockaded some major roads in Bangkok for several months to force the government of former PM Samak to step down. The road blockade continued even after the Samak government was replaced by the short administration of former PM Somchai. PAD demonstrators also camped outside the Parliament and Government House for many days, and the worst action they did, they forcibly occupied the international airport which caused endless misery to stranded passengers, both local and foreign. PAD succeeded in bringing down the Somchai government and installed the current PM Abhisit government.

What you sow, you will also reap. Tens of thousands of supporters of former PM Thaksin also went to the streets of Bangkok late last month and blocked some roads, also to force the resignation of current PM Abhisit government. This is essentially doing what the last group of demonstrators did. But there is one big difference here: the current Thai government implored the "rule of law" and launched a military crackdown to implement “the law”.

Disrupting the ASEAN summit was a bad move by the “red shirts”, but my source in Bangkok said that prior to such action, the red shirts were attacked on April 11 by plainclothes security force, many were injured and there was no government action and investigation for the incident. Nonetheless, even for the sin of disrupting the ASEAN summit, killing ordinary civilians is not an appropriate response.

While the government of PM Abhisit said that there were no casualties during the April 13 military crackdown, my friend in Bangkok said scores were killed. On that day, troops north of Bangkok moved in and opened fire at a small group of red-shirts, killing instantly some people there. When the "red-shirts" fought back, more people were shot dead by the soldiers and many more injured. My friend added that armed gangs organized by government politicians roamed the streets and beat up any red-shirts they met and several were beaten to death.

When the PAD demonstrators blocked several important streets of Bangkok for several months, when the PAD demonstrators occupied the Government House and the international airport for several days, moves that were clearly violent and disruptive, they were never attacked or killed by the soldiers. PAD was even rewarded for such violent acts by awarding some of their leaders high positions in the current government.

It never fails. The rule of law is always "name-dropped" by politicians and political groups whenever it suits them. When it does not suit them, it's always easy to do unconstitutional, violent means, in the name of "people power" and "fight for democracy".

So, what's next for Thailand? I guess another round of street demonstrations and occupation of government buildings, or disruption of another high-level regional or international event in that country. Some of the leaders of the anti-Thaksin groups that occupied the international airport by force are in government now. Their mere presence there can re-ignite another political vendetta anytime.

The Abhisit government can do several ways to help reduce the tension and the desire for another political vendetta. One, by asking all PAD leaders, other political leaders who were closely associated with the half-year street occupations and take-over of the international airport, who are currently in government, to resign and leave their posts. This way, impressions of double-standard in the application of the law can be dispelled. When it's the anti-Thaksin group occupying airports and blockading streets, they get rewarded with government posts.

Two, make the responsible soldiers and their officers be held accountable for the killings. Killing ordinary and unarmed civilians in is a shameless and ruthless act that any government can do. And three, the government should refrain from media censorship, allow media and independent investigation on what really happened on the crackdown on April 13. The Thai government needs more transparency and accountability to avoid being compared as similar to the military junta governing Myanmar.

Countries that do not ensure the promulgation of the rule of law tend to suffer from continuing political instability.
------------

The attacks in Bombay, I hope it can be a reminder to the Indian government, and all other governments around the world, that they must stick and focus on their most important function as government -- to protect the citizens' right to life, right to private property, right to dignity and expression.

Governments should over-regulate killers and terrorists, over-spy criminals and robbers, over-persecute rapists and kidnappers. And they should under-regulate and under-tax business and entrepreneurship.

The PAD demonstrators in Bangkok, it's very sad for Thailand's economy and tourism. I want to see a fellow Asian economy and country prosper more. Because when they prosper and grow more, they will import more from my country, they will invest more in my country, etc. And for Filipinos who are travelling to Europe or South Asian countries (and Europeans and S. Asians going to the Philippines), Bangkok airport (along with HK or Singapore airports) is a typical transit point for their final destinations.

Now people will rethink of flying to Thailand, or landing in Bangkok as transit point, because of the stand-off by the demonstrators. I think the Thai police, if they really understand their duty to the Thai constitution and the rule of law, should have dispersed those demonstrators at the airport on the first day they occupied it. Coercion by the minority demonstrators should be neutralized by the State's bigger coercive power, which is the police and the military.
------------