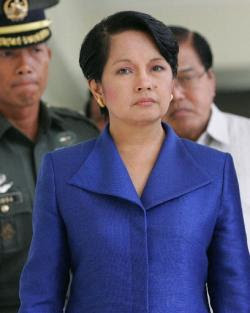 President GMA's decision to run for Congress reflects the following:

1. She is too greedy for political power. Not content with being the 2nd longest-serving President after the dictator Marcos, now she wants to become a Congresswoman, possibly become a Speaker of the House, then orchestrate a charter change to move to a parliamentary form of government, then she can become a Prime Minister. She wanted to become the Prime Minister by next year by attempting several times this year and previous years, to change the Constitution and move to a parliamentary form of government.

2. Her greed for political power is directly proportional to the amount of corruption scandals and 2004 election cheating scandals that she and her family face. One can connect her deep desire to cling on to high political power in order to protect herself and her family from political and legal investigations that will come their way after her term will end in June 2010, especially when any of the opposition candidates will win.

3. Her running for a lower political position, instead of just retiring from politics, has no precedent. Past Presidents Cory Aquino and Fidel Ramos simply retired from politics after their term ended. Contrast that with former President Erap Estrada, a convicted criminal by the courts until GMA gave him presidential pardon, and the current President herself, who is mired in endless scandals.

4. Her running for a Congressional seat is leading to another legal and electoral, and possibly a Constitutional, question. She will be the ONLY Congressional candidate who enjoys all the powers and privileges of the Office of the President, as commander in chief of all armed forces of the Philippines (air force, army, navy) and overall head of the Philippine National Police (PNP). Fairness in elections is already totally demolished.

5. She is the President of the 92 million Filipinos but her attention has been focused on a few thousand residents and voters in the 2nd District of Pampanga. And she will do the same for the next 6 months.

6. The promulgation of the rule of law has suffered the worst during her 9 years term (2001 to 2009) as President of the Philippine Republic. The Maguindanao massacre that happened last week (57 people killed in broad daylight by a clan that is very close to her administration) was among the latest example of the disrespect of the rule of law, and the institutionalization of the rule of men. So many scandals in her government all these past 9 years and not a single official in her administration went to jail. For instance, former Comelec head Benjamin Abalos who was clearly identified as among the top engineers of the NBN-ZTE multi-million dollars corruption scandal, remains. Well, above Abalos, the President herself and her husband were the clear masterminds of the aborted robbery.
Posted by Bienvenido Oplas Jr at 6:41 PM