Warming Hysteria: Challenge Them to a Debate...

Recently, I've been challenging to a public debate the leaders of Oxfam Philippines, IBON, WWF, Greenpeace, etc. re warming hysteria.

I know their usual arguments, the IPCC mantra being paraded, as follows:

a) there is unequivocal warming,
b) this warming is unprecedented in history, and
c) CO2 and other GHGs are the main cause of warming.

For me this is a big SCAM.

And I will argue the following:

2. There were periods in the past which are a lot WARMER than today's levels. In particular, the Medieval Warm Period (MWP).

3. CO2 is NOT the main driver of the earth's climate cycle (or natural climate change) of warming-cooling. It's the SUN and other natural factors (PDO, cosmic rays, volcanoes).

A few days have passed, there reply is...

Well, IBON said that they will invite me in some of their activities, I said ok, but I wish it will be a debate format -- charts vs charts, tables vs tables, graphs vs graphs. No additional comment from them yet.

I was also sending some of my presentations showing that we are experiencing a global cooling, not warming, to 2 PAGASA officials, including the affable Nathanial "Tani" Cruz. So far, got no comment or countercomment from them.

One of my friends, Ozone Azanza, asked his friends at the DOST if they will comment on my papers that Ozone sent him, probably engage me in a debate, he said no comment from them either.

Well, I would assume that all leaders of the Filipino warmers are in Copenhagen now. So I should receive a reply from them later.

Meanwhile, I will have a debate with Dr. Joey Comiso, perhaps the only Filipino scientist, at NASA. This will be on late Feb or early March 2010. Organizers will be the Filipino Foresters assn. they plan the venue to be either at the DENR or UPLB. I will just wait for details later.
---------

(Global temperature from satellite data of the troposphere, 8 kms. above sea level; data interpreted by the Univ. of Alabama in Huntsville [UAH], 2002 to Oct. 2009. CO2 data is from Mauna Loa, Hawaii).

Yesterday, well almost everyday before and during the Copenhagen meeting on climate, we hear and read news reports from the UN, from various governments, and from big environmentalist groups, saying we're doomed unless we follow their ecological central planning agenda.

One such report yesterday, is a news report from the UN saying that "this decade likely to be the hottest on record",
http://www.gmanews.tv/story/178855/un-2000-2009-likely-warmest-decade-on-record

I was interviewed yesterday by Ms. Steph Ongkiko of RPN Channel 9 to ask me about my reaction to such report. I said "the UN IPCC is lying. This decade, the planet is cooling, not warming."

This argument and the chart to prove it is contained in my recent paper, "Warming time out amidst climate hysteria" that I presented at the Las Pinas Chamber of Commerce and Industry (LPCCI) last November 24, 2009,
http://www.minimalgovernment.net/media/mg_20091124.pdf

I showed there the following:

Arctic ice extent as of Dec. 8, 2009, red line. The level of ice there this year, this month, is no different from recent years' levels. Data from the International Arctic Research Center (IARC) and Japan Aerospace Exploration Agency (JAXA). 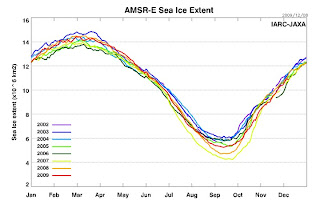 Meanwhile, the hypocrisy of the "saviours of the planet" who want the world to cut on carbon emission, brought to Copenhagen 1,200+ carbon-guzzling limousines, 140 extra private jets, not to mention SUVs, sedans, lots of commercial planes. See here,
http://wattsupwiththat.com/2009/12/07/december-7th-2009-a-day-that-will-live-in-hypocrisy/
(2) Al Gore Stupidity
At one TV interview last month, he said that the temperature of the Earth at 2 kilometers below the surface was "millions of degrees" (correct answer: between 500 to 900 C)

The other day, when he was interviewed, he said that the climategate emails, "the most recent one is more than 10 years old". Boo-boo. The most recent emails there were several days old when they were hacked/passed on. See here,
http://wattsupwiththat.com/2009/12/08/al-gore-cant-tell-time-thinks-most-recent-climategate-email-is-more-than-10-years-old/#more-13904

It's really dangerous to put politicians as "spokesmen" of major natural science issues. They talk junk science and propose junk solutions and the world is implementing them!
(3) Early Snow and Copenhagen
December 07, 2010
Last week, supposedly dry Houston received snow, people there were surprised. My Filipino friends there were happy of course that their kids got their pictures in the snow, for they just migrated from Singapore a few months ago.
This morning, another Filipino friend in NJ posted pictures of his wife and son playing in the snow, saying early winter is here. And tonight, another Filipino friend in Rocklin, north California, was surpirsed to find snow in their backyard!

Meanwhile in Copenhagen, some 15,000 climate bureaucrats, 5,000 media people and environmentalists, went to Copenhagen to fight global warming and climate change. More than 1,200 limousines were not enough, 140 extra private jets, not to mention commercial planes, sedans and SUVs, are crowding the city. Yes, those officials, showbiz celebrities, environmentalists, and so on want to save the world! Here's the link for the above figures,
ttp://www.telegraph.co.uk/earth/copenhagen-climate-change-confe/6736517/Copenhagen-climate-summit-1200-limos-140-private-planes-and-caviar-wedges.html
Posted by Bienvenido Oplas Jr at 7:59 AM

Nonoy - hope its ok to share link to your blog on forums? :)

Hi Jyoti,
Yes, no problem.
I also challenged the leaders of Oxfam Philippines, IBON, WWF, others to a public debate. Zero taker from any of them! Well, maybe after they arrived from Copenhagen or somewhere...