This is a funny situation, showing the irrationality of double talk by climate alarmism, hahaha. See these reports:

SACRAMENTO — California denied 21 oil drilling permits this week in the latest move toward ending fracking in a state that makes millions from the petroleum industry but is seeing widespread drought and more dangerous fire seasons linked to climate change.

Aera Energy, a joint venture Shell and ExxonMobil, called the permit denials “disappointing though not surprising.”

“This is the latest decision attacking the oil and gas industry that is based solely on politics rather than sound data or science,” Aera spokeswoman Cindy Pollard said Friday, adding that the company was evaluating its legal options.

Citing the need to reduce greenhouse gas emissions, California officials denied 21 fracking permits this week. What they didn’t mention was that the permit denials are more likely to benefit foreign oil producers than the environment.

State Oil and Gas Supervisor Uduak-Joe Ntuk cited climate change as the reason to deny the permits, as California aims to ban fracking altogether by 2024 and stop all oil development by 2045. But not issuing permits to develop domestic energy won’t prevent Californians from using gasoline and other petroleum productions – it’s just ensuring that more of the energy they use will be produced overseas and arrive by tanker.

In fact, for the past 25 years the amount of oil supplied to California’s refineries has essentially held steady at around 660 million barrels per year, but the source of the supply has changed drastically. In 1995, nearly all of that oil came from within California’s borders and Alaska. Today, the majority of the oil comes from foreign imports as data from the state’s Energy Commission shows: 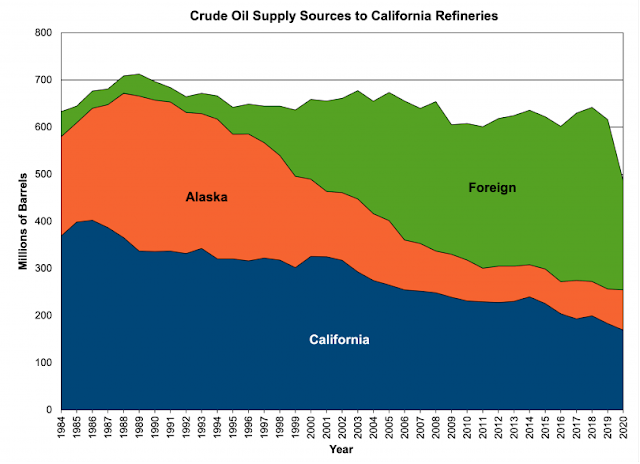 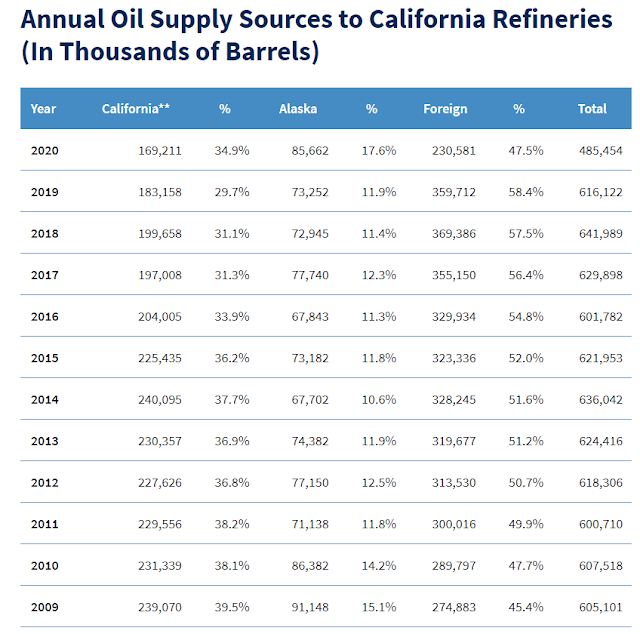 Well Joe… What is the “logic in increasing foreign production rather than focusing on American jobs and American energy security“?

Meanwhile, high US oil production under Trump has its own momentum, but potential increase is restricted by the Biden administration. See these reports:

(2) The Insult of Favoring OPEC's Leaders Over America's Energy Workers
By Scott A. Angelle July 26, 2021
https://www.realclearenergy.org/articles/2021/07/26/the_insult_of_favoring_opecs_leaders_over_americas_energy_workers_787212.html

As demand for oil continues to grow, gasoline prices are climbing across the country. Yet, the Biden Administration has asked OPEC – not domestic producers and USA energy workers – for help to supply the U.S. with more oil. Enticing countries with lower environmental standards is actually detrimental to the Administration’s stated policy goal of combating global climate change by reducing fossil fuel usage.

Republican Senators have accused Interior Secretary Deb Haaland of defying a ruling by a federal judge to restart oil leases, issued in response to a temporary suspension—a pause, as it was termed—of these leases by President Biden earlier this year.

Russia was one of the big winners from the latest OPEC+ deal adjustments, which allowed it to increase its oil production quite substantially without returning to pre-deal levels, however. Those were over 11 million bpd, last produced in late 2018, but since then, Russian oil companies have been restricted by the OPEC+ deal.

This is US weekly crude oil production.