(This is an old draft last year, posting only now)

Palawan is a big and beautiful island-province with many municipalities and barangays in nearby small islands (Coron, Calauit, etc). Pre-lockdown it was attracting hundreds of thousands of local and foreign visitors yearly so it has many beautiful and boutique hotels, some big malls in the capital, Puerto Princesa City. And one problem in Palawan is low power supply, blackout can be frequent, so the hotels, malls, big restos, shopping centers must have standby generator sets (gensets) running on diesel. 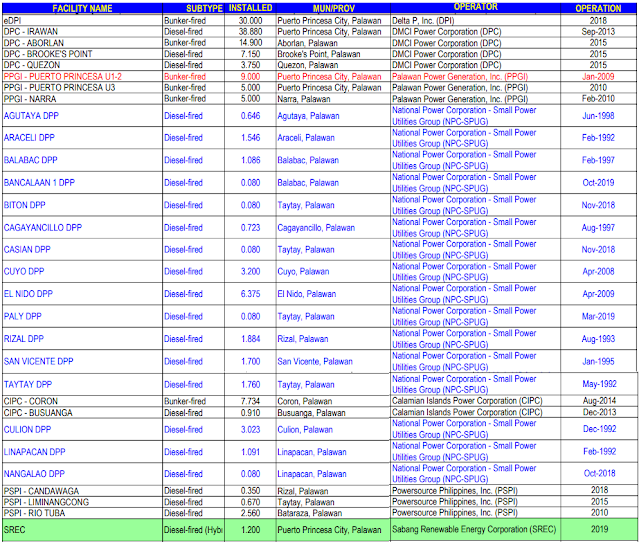 DPC proposed a 30 MW coal power plant in Palawan several years ago but the plan was opposed by many environmental groups and individuals because they do not want fossil fuel plant in the island-province. But oil and coal are both fossil fuels so how come people agree with one but not the other?

The main concerns, fear or scare of people against coal power plants are (1) perceived high pollution and adverse impact on people’s health, and (2) impact on “man-made” global warming.

On #1, take two big islands east of Palawan, Panay (composed of four provinces Aklan, Antique, Capiz and Iloilo) and Cebu. These two islands have combined coal plants of almost 1,400 MW or 47x larger than the proposed 30 MW in Palawan.

Table 2. Coal power plants in Cebu and Panay islands as of June 2020 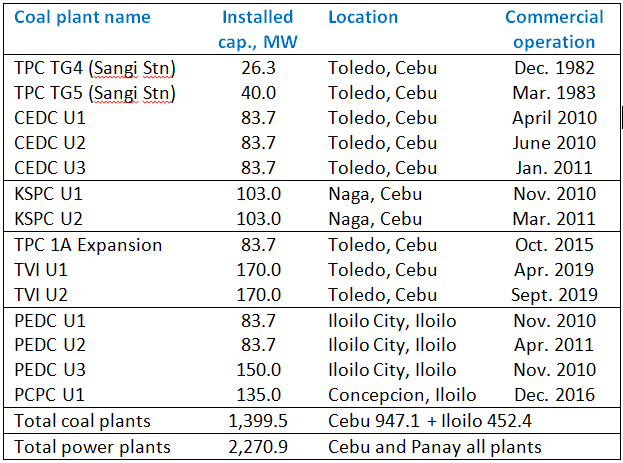 Coal power in Cebu and Panay comprise 61.6% of their total power capacity including oil-based, hydro-electric, biomass and solar. Are the people of Cebu and Panay sicklier, poorer, less developed than the people of Palawan which does not have a single coal power plant? Likely the answer is No.

Coal power is a lot cheaper than gensets running on diesel or bunker fuel that generate electricity at about P15 to P20/kwh cost while coal plants in Luzon grid would produce power at P4 to P6/kwh. Consumers in off-grid islands like Palawan, Mindoro, Masbate, Camiguin, pay low because they are subsidized, the extra cost are passed to all consumers nationwide via universal charge missionary electrification (UC-ME) in our monthly electricity bill, about P0.16/kwh.

Coal plants do not cause ill health effects as spread by some anti-coal activists. Ask the people in Cebu and Panay islands if they are sicklier than the people of Palawan. Or ask the people of Luzon that host big coal power plants like the provinces of Quezon (2,195 MW), Pangasinan (1,294 MW), Bataan (1,290 MW), Batangas (1,170 MW), Zambales (674 MW) and Pampanga (166 MW).

I have visited Palawan several times and I remain fascinated by its natural beauty, which attracts more visitors yearly, which create many tourism-related jobs in the province. Having frequent blackouts because of insufficient power, or expensive hotels because these firms must have huge and expensive  gensets nearby, will limit the province’s potentials.

The Department of Energy (DOE) has already ordered last year no more new coal power plants. So Palawan is destined to have frequent blackouts and expensive electricity -- unless the people there accept other power sources like big hydro, many small run-of-river hydro, or modular nuclear plants. If Palawan will get more big wind and solar farms, they must clear more lands and remove thousands of trees. Solar hates shade -- from clouds and tall trees. Wind requires wide land clearing for roads of huge, long trucks.
---------------