BWorld 498, SONA on business over the last five years

* My article in BusinessWorld last July 26.

President Rodrigo Roa Duterte (PRRD) will deliver his sixth and last State of the Nation Address (SONA) 2021 hours after I submit this paper to my editor today. So, I can only write and assess his SONA speeches for the last five years, each speech ranging from 10 to 20 pages long.

I focus on some of his pronouncements that help encourage or discourage investments. SONA 2016 was generally constructive, with no attacks on business. But in SONA 2017 to 2020, he inserted implicit and explicit threats to some businesses, as well as an admission of helplessness in fighting corruption.

2. SONA 2017: “we shall put a stop to the extraction and exportation of our mineral resources to foreign nations for processing abroad and importing them back to the Philippines… So, I will increase the taxes… compensate or make up for the damage or at least the income restored. Otherwise, I’ll have to stop mining.”

3. SONA 2018: “Our campaign against Endo has resulted in the regularization of more than 300,000 workers as of early this month… To the mining industry… change [your] management radically because this time you will have restrictive policies. The prohibition of open pit mining is one.”

4. SONA 2019: “When will corruption end? Kailan ba talaga ‘to? Hanggang kailan? (Until when, really? Until when?) Well, I don’t know. I’ve been in — with government for almost 35 years now. I am not singling out myself. It’s the entire gamut of our system.”

5. SONA 2020: “I might just as well close all of you (telcos) and we revert back to the line telephone at kukunin ko ‘yan, expropriate ko sa gobyerno… (I will get them, I will have government expropriate them) How can you now craft a new (water) contract? Because I would insist that you pay the billions and billions that you collected.”

To measure how the Philippines attracts foreign direct investment (FDI) relative to other countries, I will use the UN Conference on Trade and Development (UNCTAD) World Investment Report (WIR) 2021, released last month. I also use FDI inward stock, not annual inflows, because the inward stock reflects the net of inflows less outflows in investments.

Among emerging and developed economies in Asia, the Philippines remains to have the smallest FDI stock. Especially in 2010, the last year of former President Gloria Macapagal Arroyo’s administration, the Philippines’ FDI stock of $26 billion was less than half of Taiwan’s and one-fourth of Malaysia’s.

But in 2016, the last year of former President Benigno Aquino III’s administration, the Philippines’ FDI stock has surged to $64.5 billion and nearly reached Taiwan’s level and was more than one-half of Malaysia’s.

In 2019, three years into the PRRD administration, the momentum of FDI confidence was retained but we have not overtaken Taiwan. Global mobility restrictions in 2020 only slowed down but did not stop expansion of FDI stock worldwide (see Figure 1). 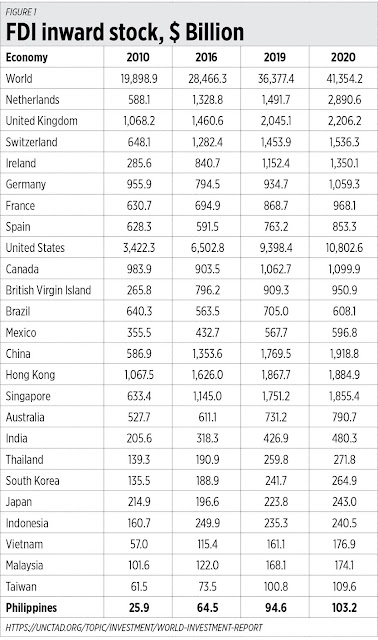 In SONA 2020, PRRD discussed lengthily the impact of COVID-19 and global mobility restrictions. His administration responded with stricter lockdown policies than many countries and he expanded public spending and borrowings.

I compared government debt as a percentage of GDP (or Public debt/GDP) in the ASEAN except Brunei. The following trends emerged in changes in percentage points:

Meaning that in the ASEAN, the PRRD administration has fiscally over-reacted and over-borrowed and our Public debt/GDP in 2020 of 53.5% has returned to almost the 2009 level of 54.8% (see Figure 2). 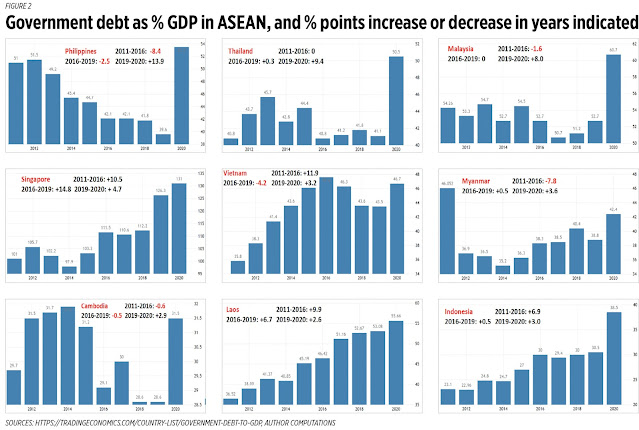 There are three bad omens and threats for Philippine businesses and taxpayers:

One, the numerator — government debt — jumping significantly shows a new age of high fiscal irresponsibility. Unlimited borrowing to continue and let the next administrations worry how to deal with them.

Two, the denominator — the Philippines’ GDP level — was severely smacked down in 2020 by the very restrictive lockdown policies. The GDP contraction of -9.6% in 2020 was the worst for the Philippines since post-World War II, was the deepest in East Asia, and was among the worst in the whole world.

Three, taxpayers will be slammed with new taxes, or higher tax rates, plus higher regulatory fees, fines and penalties, to pay the huge debt obligations, principal plus interest. This will likely start in 2022 after the elections.

There are two ways to mitigate these three threats. One is to relax the lockdown — let Philippine entrepreneurs and workers do more business, then government can collect more tax revenues without resorting to higher borrowings. And, two, resume large-scale privatization of some government corporations and assets, plus downsize some government agencies in manpower and subsidies.

More economic freedom and not more restrictive lockdowns, more privatization and not more taxation, will provide win-win pathways to economic recovery while dealing with the virus.
---------------

Posted by Bienvenido Oplas Jr at 10:26 AM