Ecological socialism and central planning, food rationing are lousy. The case of Sri Lanka. Read on and take lessons. Thank you.
-----------------

Fifty-two years later, Sri Lanka has pulled off a revolution that is “antigreen” in the modern sense, toppling its president, Gotabaya Rajapaksa. In an uprising that has its roots in Mr. Rajapaksa’s imperious decision to impose organic farming on the entire country—which led to widespread hunger after the agricultural economy collapsed

2. Eco-extremism has brought Sri Lanka to its knees
An obsession with organic farming ‘in sync with nature’ triggered an unsustainable but predictable economic crisis
MATT RIDLEY  14 July 2022 • 4:55pm
https://www.telegraph.co.uk/news/2022/07/14/eco-extremism-has-brought-sri-lanka-knees/

In April 2021, president Gotabaya Rajapaksa announced that Sri Lanka was banning most pesticides and all synthetic fertiliser to go fully organic. Within months, the volume of tea exports had halved, cutting foreign exchange earnings. Rice yields plummeted leading to an unprecedented requirement to import rice. With the government unable to service its debt, the currency collapsed.

The government promised more manure, but it would take at least five times as much manure as the country produces to replace the “synthetic” nitrogen fixed from the air, and there’s not enough livestock or land to produce that much. In Glasgow for the climate summit last year, Sri Lanka’s president was still boasting that his agricultural policy was “in sync with nature”.

At the time, his organic decision was widely praised by environmentalists. Sri Lanka scored 98 out of 100 on the “ESG” – environmental, social and governance – criteria for investment.

These are the real-world consequences of government central planning.

Sri Lanka, under the leadership of President Gotabaya Rajapaksa, decided in April 2021 to become the world’s first all-organic country. The government banned the use of chemical fertilizers and banned their importation....

But after the fertilizer ban went into effect, rice production fell by 20 percent in only six months. The country had to import $450 million worth of rice to make up the difference, and rice prices still went up by 50 percent. Tea exports plummeted, costing the economy $425 million. The government reversed parts of the policy in November 2021, but the damage was already done.

4. Sri Lanka and the global revolt against the laptop elites
From Sri Lanka to the Netherlands, Albania to Canada, the masses are stirring.
Brendan O'Neill.  12th July 2022
https://www.spiked-online.com/2022/07/12/sri-lanka-and-the-global-revolt-against-the-laptop-elites/

The other facet of Sri Lanka’s crisis we must confront is the role played by eco-ideology. It is unquestionable that Sri Lanka’s suffering has been inflamed and exacerbated by its determination to become a Net Zero nation. A nation of fertiliser-free farming. A ‘good’ environmentally responsible nation that will please the green elites in global institutions. Sri Lanka’s severe green policies have had a devastating impact on food production and on its key export industries, worsening its crisis of inflation.

Yet at last year’s UN climate change summit in Glasgow, Rajapaksa boasted of his nation’s commitment to an agricultural revolution “in sync with nature”. Soon afterwards, he fired two government officials for publicly criticising the increasingly dire food situation and fertiliser ban.

6. Going organic might be fashionably green, but it won’t feed the world
BJORN LOMBORG 11 JULY 2022 - 14:13
https://www.businesslive.co.za/bd/opinion/2022-07-11-bjorn-lomborg-going-organic-might-be-fashionably-green-but-it-wont-feed-the-world/

Sri Lanka’s organic experiment failed fundamentally because of one simple fact: it does not have enough land to replace synthetic nitrogen fertiliser with animal manure. To shift to organics and keep production it would need five to seven times more manure than the total amount of manure available to it today.

Synthetic nitrogen fertilisers, mostly made with natural gas, are a modern miracle, crucial for feeding the world. Largely thanks to this fertiliser, agricultural outputs tripled in the past half-century as the human population doubled. Artificial fertiliser and modern farming inputs are the reason the number of people working on farms has been slashed in every rich country, freeing people for other productive occupations.

Environment Minister Mahinda Amaweera declared a government initiative to save the earth from “our own geoengineering misuse, greed and selfishness” in 2020 ahead of a forum on halving nitrogen waste. The move was part of Sri Lanka’s effort to pursue environmental, social and governance (ESG) goals; the country signed onto a green finance taxonomy with the International Finance Corporation in May that included a commitment to organic fertilizers.

... It is in this context that my Government took firm steps to reduce imports of chemical fertilizer, and strongly encourage organic agriculture.
Although this action has been broadly appreciated, it has also met with some criticism and resistance.
In addition to chemical fertilizer lobby groups, this resistance has come from farmers who have grown accustomed to overusing fertilizer as an easy means of increasing yields...

My Government’s policy frameworks emphasizes sustainability.
This is reflected in Sri Lanka’s ambitious updated Nationally Determined Contributions to the UNFCC Mechanism.
These include increasing the contribution of renewable energy sources to 70% of national needs by 2030, achieving carbon neutrality by 2050, and ensuring no more new coal power projects.
Sri Lanka is proud to be a co-lead of the Energy Compact for No New Coal Power. 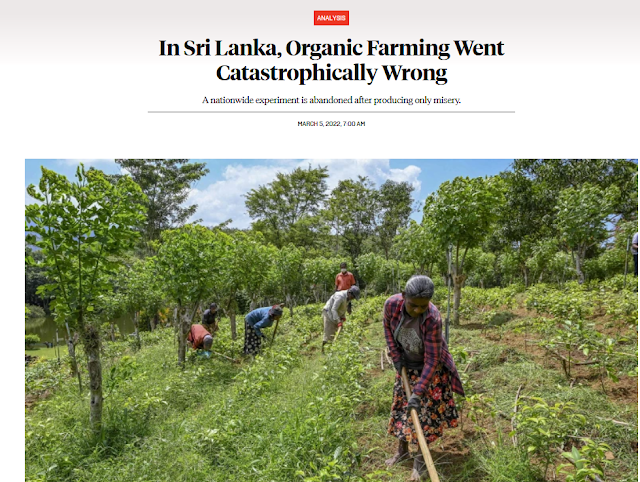