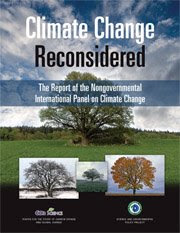 A new 2009 report of the Nongovernmental International Panel on Climate Change (NIPCC), "Climate Change Reconsidered", is the report on global warming the United Nations’ climate panel should have written—but didnt.

The 880-page report was released last June 2 at the 3rd International Conference on Climate Change (ICCC) in Washington DC. It rigorously critiques the 2007 Fourth Assessment Report of the UN’s Intergovernmental Panel on Climate Change (IPCC), which concluded that harmful global warming “very likely” has been due to human activity in the release of greenhouse gases. The science behind that conclusion is soundly refuted in that report, coauthored by Dr. S. Fred Singer and Dr. Craig Idso.

Dull text of the report and related materials can be found at http://www.nipccreport.org.
-------

Below are some news reports that I gathered reporting cooling in other Asian countries and in Australia. This list is not complete, of course.

Bangkok - A cold front sweeping in from China that has dropped temperatures to as low as 7 degrees celsius in parts of sunny Thailand has been blamed for three deaths, although alcohol may have contributed, media reports said Tuesday.

The high pressure system that moved into Thailand over the weekend was blamed for the death of a 71-year-old Buddhist monk in Ayutthaya province on Sunday and two men in northern Thailand on Monday, the Bangkok Post reported….

The wintry weather that has gripped the country over the past few days has chilled Bangkok residents with the coldest air in a decade, said a top official at the Meteorological Department.

The department's Weather Forecast Bureau director Somchai Baimoung told Daily Xpress yesterday that the 15.1 degrees Celsius in Bangkok's Don Muang district on Monday was the lowest the mercury had fallen since 1999….

The weather office warned of gusts, high seas, and rains in the next few days after a low pressure strengthened into a tropical trough off Vietnam’s central coast, and a cold front formed over the northern regions.

The Southern Hydrometeorology Station announced Thursday a low pressure to the south of Hoang Sa archipelago, 170 nautical miles from the central Danang city, had strengthened into a tropical trough with its eye 420km east of Danang and Phu Yen province, and winds blowing at 39-49km per hour…

A cold front is hovering over northern Vietnam and is expected to be followed by another, triggering a cold spell in the region.

The National Center for Hydro-Meteorological Forecasts further reported Friday that light, scattered showers would occur in the northern and central regions while there would be heavy winds and rough seas off the central coast and in the Tonkin Gulf.

(5) It is a chill season for summer appliances in Kashmir

Srinagar June 17: The consumer durables industry in Kashmir is clouded by a spell of coolness this summer as cold weather has put off consumers from making purchases in summer appliances.

The market for the summer appliances like refrigerators, air conditioners, fans and coolers has dipped approximately by 90 percent, said Shafat Ahmed, a prominent dealer in refrigerators. Shafat, who owns a chain of retail outlets in the city, says the cool weather is inflicting serious damage to his business….

Potato cultivation in Bamyan Province, central Afghanistan, employs thousands of people and output can top 150,000 tons a year, according to the Ministry of Agriculture, Irrigation and Livestock….

A new Australian record was set early this morning, a temperature of minus 13 degrees, at Charlotte Pass on the Snowy Mountains.

Across the border, on the Victorian Alps April records were broken at Mt Hotham where it chilled to minus eight degrees and Mt Buller and Falls Creek where it got as low as minus seven….
Posted by Bienvenido Oplas Jr at 8:43 AM

I commented on the new NIPCC report here. It is full of old and tired arguments that have been debunked over and over again. Moreover, it builds on a very strong and unfounded faith in negative feedbacks from nature, which are hypothetical with sometimes sketchy, often contradictory, and sometimes no evidence of actually operating at a globally significant scale. This highlights an inconsistent view of uncertainty, and an unwillingness to weigh the evidence: “If it causes cooling, the uncertainty (or lack of evidence) doesn’t matter; if it causes warming, it’s too uncertain (and no evidence strong enough) to matter”. Not a very scientific way of looking at the world.