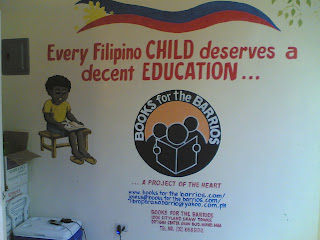 In classic statist and welfarist philosophy, education, from primary to tertiary levels, should be government responsibility, not personal or parental responsibility. Thus, everything from school buildings to library to school tuition, etc. should be handled and funded by the State or by local governments.

But there are plenty of initiatives around the world where individuals, corporations, private foundations,  civic groups and other civil society organizations (CSOs) are involved in helping the poor have access to good quality education. One of such groups or projects is the Books for the Barrios (BftB, http://www.booksforthebarrios.org/home.php) project. 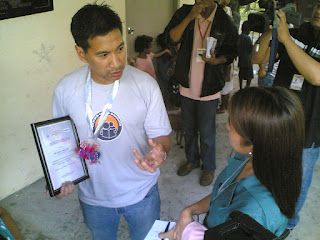 My good friend, Ramon "Monchit" Arellano, a Filipino working at AT&T in northern California, has been helping this project for several years now. Not only himself, but also his entire family, wife and 2 kids; then some of his fellow Filipino employees of AT&T. They bring their old books, solicit used books from their friends, bring those to the BftB office, help pack the books into big boxes, to be shipped to the Philippines, and BftB staff here distribute the books to various barangays or villages, in public elementary schools which have no or very small library. Monchit below, being intereviewed by the local media.

Monchit also helped raise funds for the project about 2 or 3 years ago, when he heard that BftB was lacking money for its various projects, Monchit ran the San Francisco marathon, with an awareness-raising campaign to raise money. His target of raising $3,500 from his friends and other people was short by only about $100, to which he turned over the entire amount to the BftB. 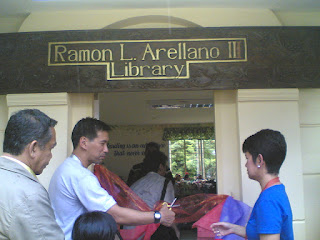 BftB leaders were so impressed by his action and support. It later decided to return the favor by naming a library in his name. The place will be in a public elementary school in Brgy. Sapang Bato, Angeles City. This school has several hundred students, about 95 percent are Aetas, one of the indigenous peoples in the Philippines.

Last June 18, 2009, the library was officially opened. It's called "Ramon L. Arellano II Library". In the picture, Monchit, assisted by his wife Mimi, cutting the ribbon. 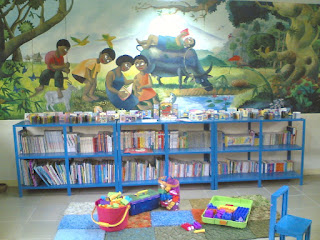 Inside this library are slightly-used books, various educational materials, even stuffed toys, for elementary students. All of those were from the US. Here are some pictures of the books and toys. Notice the painting in the wall -- they are Aeta children in a rural but clean environment. Where there is better education, a good and hopeful future is not far away. 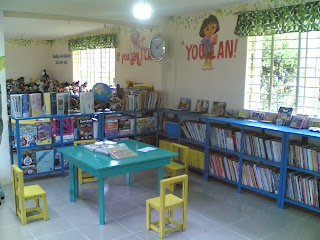 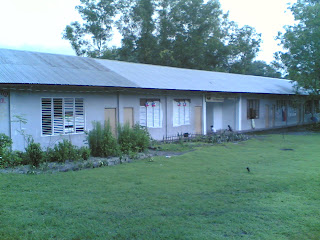 This is the main school building. Beside it by the way, is a Gawad Kalinga (GK) housing project, also for the Aeta households. But most of the students of this school live in far sitios and barrios, some students walk as far as 4 kilometers away from their house. 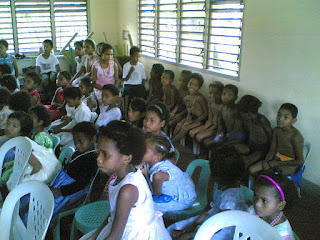 The main beneficiaries of this library are the Aeta children. Some of the male students here were in their traditional G-strings attire, the females were in some of their beautiful dresses, because they have a dance presentation during the launching ceremony. I noticed that they were well-behaved. Just one instruction from their teachers and they immediately follow. They are really disciplined, or they are only respectful of their guests from the cities, I don't know. 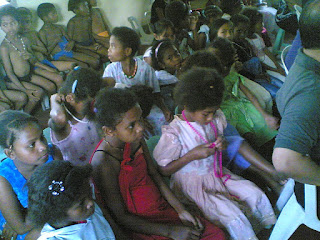 The female students, they have a song and a "fashion show" presentation during the program. Their dress could be the best they have in the house, I don't know. Their presentation was cute, funny and very entertaining. Talk about innocent and cheerful girls. 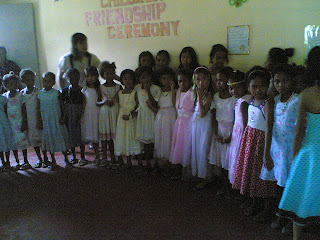 After the formal program, there was a modest "merienda" or snacks for the children. Here, some students taking their snacks. They just squat, not enough chairs, modest food but they really enjoyed it, no left over! 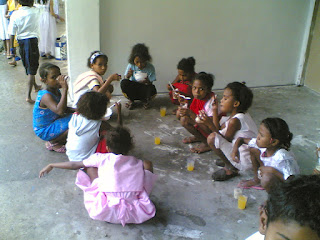 Monchit said that he was so honored by the presentation and the naming of the school library in his name, he promised that he will make his contribution to the BftB a "lifetime" commitment.

Yes, voluntary, charity support by individuals, corporations, foundations, NGOs, can become huge in caring for the less-privileged people. Governments do not have the monopoly of doing this work, and so the taxes and fees that they collect from the people should not be high and many.
-------

Email ThisBlogThis!Share to TwitterShare to FacebookShare to Pinterest
Labels: Books for the Barrios, CSOs, Monchit Arellano