Property rights means freedom. When someone says “I own this computer, this car and this house”, that person means he/she has exclusive right what to do with those properties. Whether to keep using them, or sell them and get a new one, or lend them to friends and relatives, or simply give them away for free to someone else. There is no external group or persons who can dictate and coerce that person what to do with those properties.

Same month last year, I wrote an article, Property rights and lefts. It was about the result of the International Property Rights Index (IPRI) 2009 Report covering 115 countries. And the result of the study showed that the Philippines ranked 74th or it belonged to the bottom 40 percent of laggard countries that do not know how to properly protect their citizens' right to private property. I concluded that article with these words,

“It is not healthy therefore, for an economy to embrace left-leaning policies that attempt to disrespect individual talents and performance, and forcibly collectivize things.” 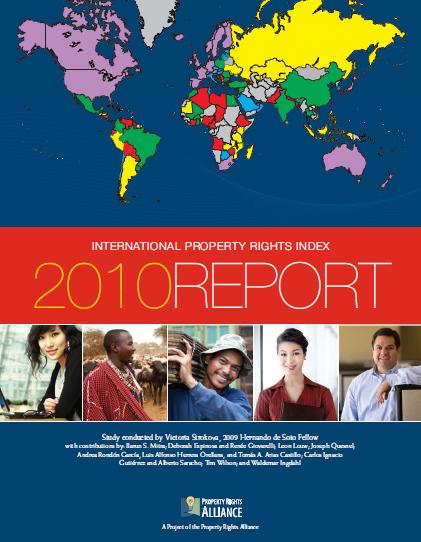 This week, IPRI 2010 Report was released by its main sponsor, the Property Rights Alliance (PRA) in the US. It is authored by Ms. Victoria Strokova, a young and dynamic intellectual from Russia who studied in the US. This time, there were 125 countries covered and the Report was co-sponsored by 63 think tanks from 40+ countries that are free market-oriented and strong believers of private property rights protection. Our very own Minimal Government Thinkers, Inc. is one of them and the only Philippine-based think tank that partnered with IPRI.

LP is important. When there is no rule of law and the government (from the Executive to Legislative and Judiciary) is corrupt, some politicians and bureaucrats can produce or allow the production, of fake land titles and they or their friends can engineer land grabbing of someone else’s property. PPR and IPR are equally important. When someone can say, “the huge cost of your scientific research and invention is your and yours alone, also the losses from your unsuccessful work. But your successful invention is also MY invention,” and government will tolerate it, then innovators will be discouraged from undertaking expensive and highly risky research and innovative work. And society will be stuck with old and outdated technologies and inventions, affecting productivity while human demands and population keep rising.

There is a scoring system employed in producing the composite IPRI, 1 the lowest (meaning almost zero protection of property rights) and 10 the highest.

The more important question now: how did the Philippines and other Asian countries fare compared to other countries around the world?

Column 1 is rank, column 2 is country, column 3 is IPRI score

Again, the Philippines belonged to the bottom 40 percent of the 125 countries covered by the study, 80th out of 125 countries. What pulled down the country’s overall score and ranking, is its low score in the legal and political environment (LP), only 3.5.

For sure, big corruption and plunder scandals in government, plus policy reversals last year like strong attempts to re-regulate the petroleum industry and actual drug price control, contributed to the low belief by entrepreneurs and the citizens of the government’s ability to really promulgate the rule of law.

Populism and leftism, the synonym concepts of socialism, will push any country towards economic underdevelopment. Private property is not public or government property. Private enterprises’ pricing should not be tinkered as government pricing.
-------