I wrote this article last March 12, 2010, and it appeared in
http://www.thelobbyist.biz/perspectives/columns/back_to_personal_responsibility/835.html
----------

El Nino and La Nina or the warming and cooling respectively of the tropical Pacific Ocean, are cyclical events that occur every 3 to 5 years on average. They happened in the past, El Nino is occurring now, La Nina will appear next, and so on. But current El Nino is being pictured in a number of circles in the country, in media especially, as “clear proof” of man-made global warming and man-caused climate change. This is wrong.

The current El Nino officially started in July 2009 (http://www.noaanews.noaa.gov/stories2009/20090709_elnino.html) and is projected to end by June this year. After which, La Nina cycle is set to start.

In a paper, “La Nina – the underappreciated portion of ENSO”, Bob Tisdale showed this and many other charts. ENSO means El Nino Southern Oscillation. 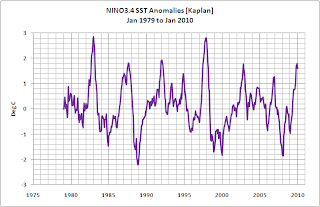 The author of the article, Bob Tisdale, made this concluding comment:

”The La Nina event of 1973/74/75/76 provided the tropical Pacific Ocean Heat Content necessary for the increase in strength and frequency of El Nino events from 1976 to 1995. The 1995/96 La Nina furnished the Ocean Heat Content that served as fuel for the 1997/98 El Nino. And the 1998/99/00/01 La Nina recharged the tropical Pacific Ocean Heat Content after the 1997/98 El Nino, returning it to the new higher level established by the La Nina of 1995/96.. It would appear that La Nina events do all of the work, while El Nino events get all the glory—and the research.

The current El Nino is a mild one. But climate alarmism makes it appear so bad – in media, in government agriculture and weather agencies, and in other public discussions. Take note that the heavy rains brought by typhoons “Ondoy” last September and “Pepeng” last October happened in an El Nino period. So if such extreme flooding occurred in an El Nino period, it is scary to think when such extreme flooding will re-occur in a La Nina period.

There are plenty of natural factors that affect the planet’s climate, warming or cooling. Among these are the Sun and the strength or weakness of its geomagnetic field, the volume of galactic cosmic rays (GCRs) from exploding stars from the outer space that enter the Earth’s atmosphere, the oceans and Pacific Decadal Oscilation (PDO), volcanoes and earthquakes and their release of geological gases like volcanic aerosols, organic biosols from plants and trees, and so on.

It is wrong, therefore, to continue blaming human carbon emission and other GHGs as the “main cause” of global warming. Such emissions do contribute but at a very small amount compared to natural factors and contributors. Such climate alarmism is driven by a deep political agenda by certain groups and governments with the ultimate goal of more environmental regulations and instituting global ecological central planning.

Today it rained. Not strong, just light showers, but it rained, for at least one hour. Today is also the 3rd day straight of dark and cloudy sky above Metro Manila and surrounding provinces. There is a “cold front affecting Luzon” according to PAGASA website today. If this cold front will linger, then El Nino might end soon. And the rains that people have been praying for, like today’s rain, will become a regular.

Meanwhile, the Fourth International Conference on Climate Change (4th ICCC, http://www.heartland.org/events/2010Chicago/index.html) is scheduled this coming May 16-18, 2010 in Chicago. The event is mainly sponsored by the Heartland Institute and co-sponsored by a number of independent think tanks around the world, including Minimal Government Thinkers. MG Thinkers is the only Philippine-based think tank that has co-sponsored this big scientific and economic conference over the past 2 years.
Posted by Bienvenido Oplas Jr at 11:17 AM