* My column in BusinessWorld last November 15. 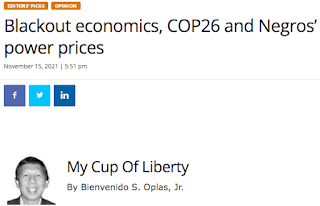 “Blackout economics” is the improper allocation of limited resources that leads to blackouts and power outages. I created this phrase and its definition in this column’s piece on June 14 (https://www.bworldonline.com/ten-indicators-of-blackout-economics/).

The first example of blackout economics in the Philippines was the killing of the Bataan Nuclear Power Plant in 1986, when President Cory Aquino, upon the advice of her officials, did not allow the operation of the nuclear power plant. Killing the potential source of 621 MW of power with no alternative big power plants led to large-scale blackouts in the country in 1990-1991.

After two weeks of meetings and negotiations at the UN COP26 in Glasgow 2021 that ended in Nov. 12, two major agreements resulted. One, the developing world wants $1.3 trillion per year of climate money from rich countries starting 2030. This is a big jump from $100 billion per year starting 2020 as agreed on in COP 20 in Paris 2015 which was not implemented anyway.

And two, that there would be a “phase down” instead of “phase out” of coal power. This is important because many developing countries aspiring to be rich — China, India, Indonesia, Vietnam, the Philippines, etc. — are now dependent on coal for at least 40% of their total power generation. Blackout economics is not part of their aspirations.

Among the major arguments for “decarbonization” is that “polar ice melts fast and results in rising sea level.”*

This statement is simply not true, is dishonest, because polar ice in both the Arctic and Antarctica, melt and grow yearly, no exception, for thousands and millions of years. There are years where the ice growth is lower than usual but followed by ice higher than usual.

The Japan Aerospace Exploration Agency (JAXA), National Institute of Polar Research (NIPR), Arctic and Antarctica Data archive System (ADS), keeps daily data of polar ice. Arctic ice in 2021 this November is higher than in the 2010s but lower than in the 2000s. In Antarctica, ice this year was above average until September then below average in October-November.

There is no “unprecedented, unequivocal melting of polar ice**,” no alarming rise in sea level due to melted polar ice, no climate crisis.

I pointed this out during the Albert Del Rosario Institute (ADRi)-Citizenwatch virtual townhall discussion last week, on Nov. 11, “Ensuring Power Supply Security for a Sustainable Economic Recovery.” The main speaker was Senator Sherwin Gatchalian, Chairman of the Senate Committee on Energy. There were eight other speakers: Jose Alejandro of Philippine Chamber of Commerce and Industry, Meneleo Carlos of the Federation of Philippine Industries, Romy Bernardo of the Foundation for Economic Freedom, Ernie Pantangco of Management Association of the Philippines, Vic Dimagiba of Laban Konsyumers, Inc., Terry Ridon of InfraWatch, Louie Montemar of Bantay Konsyumer, Kalsada, Kuryente, and myself.

I also mentioned during the forum that hastening decarbonization will lead to blackout economics part 2 in the Philippines because coal generates 57% of total electricity production while solar-wind only generates 2.7% (see Figure 2). 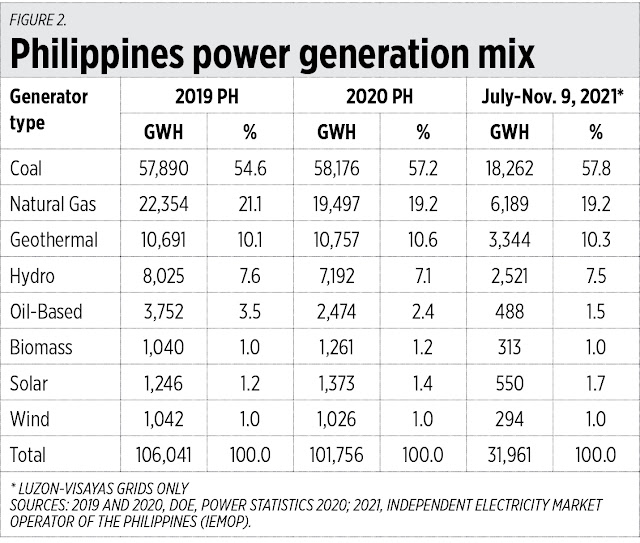 And Negros has among the most expensive electricity prices in the country. For instance, in the October and November 2021 billing of the Northern Negros Electric Cooperative (NONECO), the generation charge is P6.269/kwh compared with Meralco’s P5.044/kwh in October and P5.335/kwh in November (Meralco’s November rise was largely because of Malampaya temporary gas outage maintenance work).

The transmission charge in Negros is also high — P0.858/kwh in October and P0.753 in November — compared with Meralco’s P0.708 in October and P0.668 in November. One reason is that Negros is power-deficient overall and solar-surplus at certain hours. At night or on cloudy days, Negros imports coal power from the Cebu and Panay sub-grids, while on hot cloudless days it can export surplus solar power. It makes frequent use of the National Grid Corp. of the Philippines’ (NGCP) transmission system.

Last June, the NGCP’s Negros-Cebu submarine cable, with a capacity of 180 MW, was damaged by Department of Public Works and Highways (DPWH) dredging and re-channeling activities in Amlan, Negros Oriental. Transmission was cut by half to only 90 MW, resulting in higher electricity prices in Negros.

This brings up at least three issues.

One, the NGCP and DPWH have no liability, all congestion costs are passed on to consumers and generation companies (gencos). The DPWH or its contractor should have liability insurance to handle these cases but the NGCP has no incentive to go after the DPWH if it can pass on all the costs to the consumers and gencos.

Two, the Energy Regulatory Commission (ERC) ordered the Philippine Electricity Market Corp. (PEMC) to remove “congestion costs” in the price determination of the Wholesale Electricity Spot Market (WESM). This was a unilateral order, with no consultation with players. This has a distortionary impact on WESM pricing.

**Paraphrased from statements like: “Climate change is unequivocal and has caused unprecedented changes to the world’s atmosphere. It affects the polar ice caps…” from https://www.downtoearth.org.in/blog/climate-change/cop-26-greening-of-polar-ice-should-top-agenda-here-s-why-79839