When my wife gave birth to our 2nd child early last week, I needed to get her member data record (MDR) as one of the requirements for PhilHealth claims/deductions. I went to PhilHealth Quirino Ave. office to get it. The printing of that document should not take more than 1 minute, I guess. 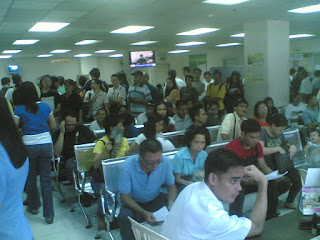 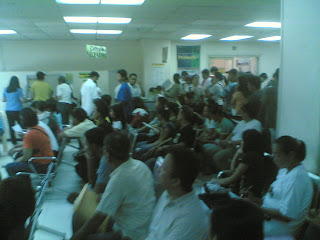 Does PhilHealth think that their members are jobless people who have nothing else to do and hence, can endure queueing for hours just to get simple documents, or file claims? I filed a claim, again for my wife who was hospitalized about 3 months ago. Just to file the claim took me 2:05 hours. Then we will have to wait at least 60 working days (roughly 2 1/2 months) to get the claims. 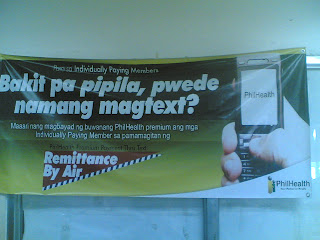 While people endure the slowness of PhilHealth bureaucracy when their members get their rightful claims after religiously paying their mandatory monthly contributions for years, there is a poster inside, shown in this photo, that members can send in their contribution by texting. When you send your contribution, PhilHealth wants to get it within seconds or minutes. When you get your claims, PhilHealth wants you to wait for hours queuing, and several months waiting for the actual claims.

Now we are resigned to the fact that PhilHealth's universal coverage will become even bigger and bigger, fine. The poor deserves healthcare. But do we all pay bigger mandatory monthly contributions then? Do we all endure even longer queues and longer waiting period to get Philhealth benefits?

The future is not yet here but my guess is that the answer to my own questions above are all Yes. Endure more ugly government bureaucracies.
-------

Yesterday afternoon, I attended a round-table discussion by the "Ayos na Gamot sa Abot-Kayang Presyo" (AGAP), or Good ,medicines at affordable price. While I did not share with AGAP its position on the "cheaper medicines law", some leaders of AGAP are my friends as we belong to a new big coalition of NGOs on health transparency in the Philippines(to be formally launched in the next few days). That's why I was among those invited to attend the round-table discussion.

The topic was about health insurance in the Philippines and the main presenters were officials from the state-owned Philippine Health Insurance Corporation (PhilHealth), as well as a staff of a Congresswoman who authored a bill revising the law on PhilHealth. Other participants were mostly health NGOs affiliated with AGAP.

The PhilHealth guys presented and made further elaboration during the earlier part of the open forum. I have to raise my hand to make several points.

3. In education and health care, there is heavy government presence and intervention, and that's where problems and scandals come -- the Department of Education (DepEd) is among the most corrupt agencies in the government as perceived by many people, PhilHealth was used during the 2004 elections where millions of non-contributing people were given health cards, there are many reports of stealing and padding of claims by some hospitals, physicians and members amounting to huge amount of money.

4. Even if the staff and personnel of PhilHealth are good people and angels, but if the President and/or top political leaders are corrupt, the institution will be corrupted and so indirectly, will be its staff. Why did the "membership" of PhilHealth jumped suddenly in 2004 and not in 2003 or 2005? Because of the 2004 Presidential elections. So we can expect the same pattern next year where there will be another Presidential elections.

5. It is apparent therefore, that the solution lies in making the government step back, in reducing its intervention and allow the markets to come in a competitive environment. I am not saying that PhilHealth should be abolished or privatized, it can be shrank and become one of the many health insurance providers in the country. Membership in PhilHealth should also not be made made mandatory; it should be voluntary.

One reason why there is low formal business activities in the country, why there is high incidence of the informal sector, is because businesses have to pay plenty of mandatory taxes and contributions to the government: (1) BIR for monthly remittance of income tax, value added tax, other taxes; (2) SSS for monthly remittance of social security mandatory contributions; (3) Pag-IBIG for mandatory housing contributions, (4) PhilHealth for mandatory health insurance contribution, (5) local governments, (6) SEC, (7) DTI, etc. Government is a big burden for entrepreneurs, so that making health insurance voluntary and not mandatory will help reduce the burden in business and entrepreneurship. Also in the "cheaper medicines law", the government boasted of advancing this philosophy, yet government taxes and fees (national and local governments) comprise about 20 percent of the retail price of medicines, making said government pronouncements an irony if not a hypocrisy.

Oww, I could see some smiles and grumbles from the audience while I was talking. After I talked, some laughter. Maybe some were wondering, "which planet does that perspective come from?" :-)

More discussions and exchanges later, one PhilHealth official mentioned about "market failure" that is why government must come in to provide support to the poor and disadvantaged people. This I could not allow to pass, I rose my hands again and spoke for the second time.

Besides, there will always be market failure anytime, anywhere. If I demand a USB with 10 GB memory and sold for only P500 (nearly US$10), there is already market failure because while there is a demand (my personal demand), there is zero supply. So will government come in to produce that powerful but dirt-cheap USB? Another case, if there is a helicopter service from Quezon City to the Manila international airport for xxx thousand pesos and there are no takers or passengers, that again is market failure because while there is a supply of a service, there is zero demand. So will government come in to subsidize the fare in that helicopter service, in order to prevent the bankruptcy of the helicopter company?

There will always be market failure but it does not imply that government should come in all the time. Many if not most market failure does not need any government intervention because the market is capable of correcting itself (reduce or stop the supply of something if demand is small or zero, or vice versa).

In the case of health insurance, my idea is that people can have dual health insurance -- the one by government (PhilHealth) and a private health maintenance organization (HMO). The latter will be operating in a competitive environment and level playing field, so that each player will be forced to continuously improve their services. Allow also price segmentation, so that HMOs can charge P1,000 per year or P10,000 per year or P100,000 per year, depending on the budget and specific needs of their clients. Lower annual payment for fewer services, higher annual payment for plentiful and elaborate services.

This way, instances of claims-padding by the contributing members and/or physicians and hospitals can be minimized if not stopped because PhilHealth's coverage will be capped to a certain maximum. Whether patients will stay in a hospital for only 1 day or 1 week or 1 month, claims padding will be minimized. Whatever amount in excess of PhilHealth coverage can be sourced by the patients and their families to their HMOs or personal/household savings, or they can approach their local politicos for assistance. Price segmentation or price differentiation is a wonderful mechanism to allocate resources properly among people with different budget and different needs.

It was a great afternoon of exchanging ideas, but for me, it was an opportunity to douse some sense to heavy statist philosophy that more government intervention, taxation, regulation (and the corruption and waste that often come with such heavy intervention), is the solution to any social or economic problem.
Posted by Bienvenido Oplas Jr at 5:51 PM