It's almost 3 weeks now of cloudy sky, or sunny morning but rains in the evening, in Metro Manila and surrounding provinces. Typhoon "Megi" (local name "Juan") has left the country more than a week ago while typhoon "Chaba" (local name "Katring") did not hit Philippine landmass, only the country's "area of responsibility" several hundred kilometers north-east.

But where is the much anticipated ever-warming of the planet?

I will show 3 graphs below from scientific sources, of course. The first is on global air temperature (the lower troposphere); the second and third are on sea surface temperature (SST). Just click on those graphs to see their larger images. 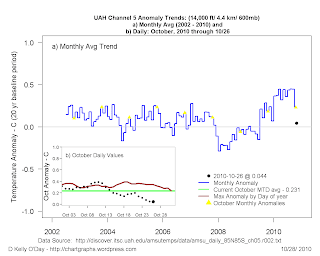 Here's the temperature of the lower troposphere (TLT) from NASA satellite, data interpretted and plotted by the Univ. of Alabama in Huntsville (UAH). As of last Tuesday, October 26, the TLT anomaly was only 0.044 C or close to zero, compared to the 1979-98 (20 yrs baseline) average global temperature. Data source is http://processtrends.com/images/RClimate_UAH_Ch5_latest.png

Here's the global SST anomaly as of last Wednesday, October 27. Temperature "anomaly" means "deviation from the normal". The SST anomaly continues its plunge in the negative territory. Data is from Dr. Roy Spencer. Dr. Spencer noted, "there is no end in sight to the cooling."

And here's another way of showing the SST as of yesterday, October 28, whether they are "colder than normal" (green-blue color) or "warmer than normal" (reddish). Note the formation of colder than normal sea water west of northern Philippines and south of China. And note how colder than normal the world's oceans are, from north Pacific to the equator to south Pacific, south Atlantic, the southern hemisphere in general. Data source is from http://www.osdpd.noaa.gov/data/sst/anomaly/anomnight.current.gif

So, what kind of "unequivocal global warming", of "huge melting of polar ice" that can lead to "catastrophic" rise in global sea height are we expecting? Millions of sq.kms. of new sea ice are forming in both the Arctic and in Antarctica.

And here is the real inconvenient truth: whether the world is warming or cooling, whether it's getting drier or wetter, whether it's bad El Nino or bad La Nina, regardless of the world's climate or weather is, the man-made warming religion (MMWR) train will continue with their ultimate goal: to institute global ecological central planning. Of packing more political and environmental powers in the hands of governments and the UN, of taking away more freedom from the people, of taking away from money from their pockets.
Posted by Bienvenido Oplas Jr at 4:00 PM