Migration and Freedom 5: Conferences on Liberty and Migration

(Note: this is my article for People's Brigada News last weekend. It should have been published two weekends ago, but I failed to submit it on time, so they posted it only last weekend.)
---------

Jakarta, Indonesia – Liberty is absence of coercion. A society that has less coercion, less regulations, restrictions and prohibitions, is more free. Whatever regulations and coercion that are instituted in society, these are meant to enhance individual freedom, not restrict it.

Advancing individual freedom and the free market is a continuing theme of the annual Pacific Rim Policy Exchange. The last conference was held in Sydney, Australia last week, September 28-30. I was one of the 80-plus participants from countries surrounding the Pacific Rim from four continents – North America, South America, Asia and Australia. I was given a travel scholarship by the main sponsor, the Americans for Tax Reforms. The other 3 sponsors of that activity were the Property Rights Alliance (PRA, US), Heartland Institute (US) and the Institute for Public Affairs (Australia). I was one of the panel speakers on the panel, “Getting free market messages out”.

After that, there was a one-day activity, “Pacific Rim Conference on Climate Change”, October 1, held in the same hotel, Sheraton on the Park, and was sponsored by the Heartland Institute. I also attended that conference. 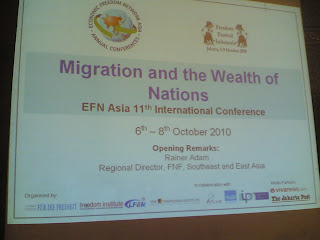 This week, I attended another important forum, the Economic Freedom Network (EFN) – Asia Conference held in Sultan Hotel in the capital city of Indonesia, October 6-8, 2010. The theme of this year’s conference is “Migration and the Wealth of Nations”. The event was mainly sponsored by the Friedrich Naumann Foundation for Liberty (FNF) and co-sponsored by six other free market-oriented think tanks, three based in Indonesia, three based in the US, Canada and UK.

FNF invited me in the conference to be one of the 9 moderators in 9 panel discussions. I moderated the panel on “Preparing migrants before departure” and the two speakers in the panel were Dr. Arianto Patunru, Director of LPEM and Economics Professor at the University of Indonesia, and Zubair Ahmed Malik, former VP of the Pakistan Chamber of Commerce and Industry.

Migration happens because people want freedom. Economic, political, cultural, religious, personal freedom. People mobility across countries and continents is a perfectly rational human behavior. Restricting such freedom by individuals is not an appropriate role or function by governments. Unless some people have committed a crime against their fellows in their home country, then their freedom to move outside should be curtailed.

Liberty and migration will continue as people seek better lives for themselves, their families and their communities.