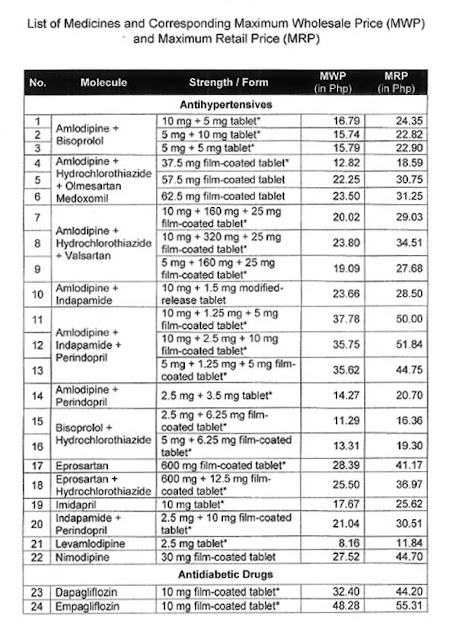 Anyway, below are the materials I saw.

Executive Order (EO) No. 104 mandated the implementation for a Maximum Retail Price (MRP) and/or Maximum Wholesale Price (MWP) 86 drug molecules or 133 drug formulas upon the recommendation of the Department of Health (DOH).

However, several of the drugs have yet to be given MRP and MWP by the technical working group (TWG) of the Department of Trade and Industry (DTI) and DOH.

“PHAP has been consistent in its opposition to price control since global experience had shown that artificial measures result in market inefficiencies and lack of supply,” the pharmaceutical firms’ group said.

“If reasonable profits are not realized, pharmaceutical companies would review the sustainability of its operations in the Philippines, including the possible downsizing in the number of employees,” it said….

PHAP also stressed that innovative drugs, or new medicines and vaccines produced from years of expensive research to address current or emerging health threats, would likely not be introduced in the Philippines.

Quezon City Rep. Alfred Vargas commended the EO that set maximum drug retail prices on basic medicine and selected anti-cancer drugs since the lower cost will have a profound effect on cancer patients and their families….

The Philippine Alliance of Patient Organizations (PAPO) yesterday opposed the proposal to create a Drug Price Regulatory Board (DPRB), saying the this is not the answer to the high cost of medicines.

In a position paper, PAPO welcomed the government’s efforts to reduce the cost of medicines that account for 85 percent of the expenses of Filipino patients.

Dr. BEAVER R. TAMESIS is on his fifth year as head of the Pharmaceutical and Healthcare Association of the Philippines (PHAP), a group of innovators and research-based MNC drug companies in the country. The industry is at the crossroads as the government implements the second phase of the maximum retail price (MRP) program or price control on essential medicines….

Tamesis cautioned the government that such price control mechanism is a bad idea that would only make pharma companies deprioritize the Philippines and end up depriving Filipinos of access to innovator drugs for critical illnesses at affordable prices while scaring investors away. Tamesis even stressed that with an approval rating of more than 80 percent, the President does not need another populist measure….

“I can swear on a stack of Bibles that our prices are very comparable with the rest of Asia and even with the developing world, we have studies to prove that. I don’t know what are they exactly comparing. I don’t know where in the world they got those numbers,” rebuts Tamesis.

Teodoro Padilla, executive director of the Pharmaceutical and Healthcare Association of the Philippines, said the recently-signed Executive Order 104 could do more harm than good for Filipinos needing a constant supply of medicines for their ailments.

"Right now, most of the medicines are patented. If there is going to be a price cap... we're not sure if we can sustain continued availability because there are costs in terms of developing these medicines which have yet been fully recovered worldwide," Padilla told CNN Philippines' Business Roundup. "A company might decide to either scale down operations or withdraw a product altogether."

“The price distortion stems from the DoH formula that sets very low prices at the manufacturers’ level and yet mandates retailers to impose as much as 45% mark-up which, at present, generally does not reach that level, particularly with most outlets,” PHAP said in a statement.

The proposed scheme would, therefore, lead to either a price freeze or even higher drug prices at the patient level.

“This is like squeezing rice farmers but mandating retail prices to go up. The result is the farmers will not plant, and there will be a shortage. It will be the same with us,” PHAP Executive Director Teodoro B. Padilla said.

More medicines for those who are “immunocompromised” or have weaker immune systems due to illnesses such as diabetes, hypertension, and lung disorders should be included in the list of 72 more drugs that the government is considering this week for price regulation, Marcos said.

…potential vaccines, medicines, and diagnostics for this coronavirus. But will we get it here in the Philippines? The answer may well be no. Drug companies are now reluctant to introduce innovative products into the Philippines because the government has forced massive discounts (reductions) on the prices of drugs.

The possibility, nay, probability that the DOH would control the price of a COVID-19 cure means the Philippines will be the last market to be supplied.

This is a risk now for any innovative drugs. Who will risk bringing in a product when you may have your margins slashed, even eliminated? You’ll concentrate on open markets where the market determines the price.
--------------

I have also written two articles in BusinessWorld on this subject.