Then a friend reposted a comment from someone attacking the Secretary saying, "You (Mar) lied by proclaiming you are instrumental in cutting the prices of medicines. On July 2009, there was a Senate press release.... 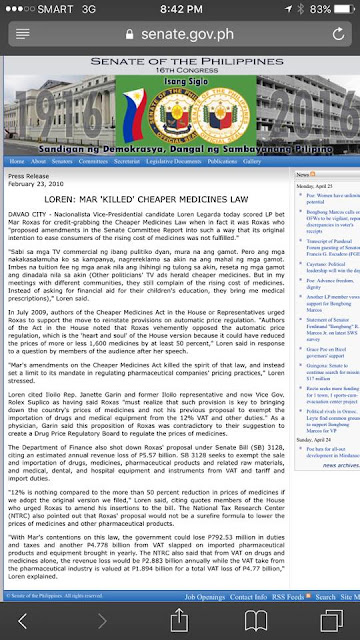 "...Authors of the Cheaper Medicines Act in the House or Representatives urged Roxas to support the move to reinstate provisions on automatic price regulation.

"Authors of the Act in the House noted that Roxas vehemently opposed the automatic price regulation, which is the 'heart and soul' of the House version because it could have reduced the prices of more or less 1,600 medicines by at least 50 percent," Sen. Loren Legarda said in response to a question by members of the audience after her speech.

"Mar's amendments on the Cheaper Medicines Act killed the spirit of that law, and instead set a limit to its mandate in regulating pharmaceutical companies' pricing practices," Loren stressed.

The drug price control policy of 2009 affected about 20 or so molecules, usually the most saleable products by multinational pharma. What Cong. Biron, even Sen. Manny Villar, also Sen. Loren? wanted was the creation of a new bureaucracy, the drug price regulation board (DPRB) with a new set of bureau directors, asst directors, staff, office, travel, etc. to be incorporated in the cheaper medicines law of 2008 (RA 9502).

That law was mainly about amending the intellectual property (IP) code so that some newly-invented, patented medicines by multinational pharma, the patent can be confiscated by the government so that local pharma like Unilab will benefit, they can also manufacture and make good profit of those newly-invented medicines. The chapter on price control was a rider in the law, not part of the original draft bill.

So did Mar lie on his role in the cheaper medicines law?

No. He delivered on that amendment to the IP Code, something that I personally did not support, but the law was created nonetheless. Mar was correct in opposing the creation of that permanent bureaucracy DPRB (likely would have been headed by ex-Cong. Biron) and endless drug price control policy.

The threat of patent confiscation by the state from innovator pharma to local generic pharma (silent cronyism actually) created some downward pressure on patented drugs. The off-patent drugs that constitute about 95% of all essential medicines list (EML) of the DOH, again off-patent, are not affected by that law.

The advocates of the creation of DPRB are mostly socialists, explicit or implicit, or plain bureaucrat extortionists. They argue that private pricing of their products is wrong, it should be the state that should price those products. Then the state and the price bureaucrats may allow some pharma products not to be included in the mandatory price control, in exchange for bribes and extortion.


The world health org (WHO) has its global essential medicines list (EML) and from what I read once, 99% of them were off-patent, meaning only 1% of those EMLs in the WHO list are newly-invented and still patented ones. In the DOH's EML, I read that it's between 90-95% are off-patent. Meaning RA 9502 has zero effect on these non-patented, non-IP protected medicines. Like the famous anti-fever paracetamol molecule, it's been off patent since 30 or more years ago.

Generics medicine was given a huge boost since 1988, the Generics law under DOH Sec. Flavier. So the cheaper medicines law of 2008 (20 years after) has contributed very little to generics promotion. The compulsory licensing (CL) and special CL provisions of RA 9502 were also meant to align PH's IP law with WHO's TRIPS flexibilities.

Funny thing about drug price control/regulation, the head of PCPI, the local pharma lobby, said during one DOH meeting that perhaps it's the first time that the local pharma + multinational pharma (represented by PHAP) were united in opposing a govt policy. Before, it was easy for them to take a stand. If PHAP takes position A, PCPI almost always takes position B that's opposed to A.

Also during the 3rd and final Presidential debate, Sen. Miriam Santiago said that her physician sister or friend said that there are new anti-cancer drugs that come out in the US almost every week. These are never-heard before, not part of "orig" nature, science-invented molecules and medicines. They are very expensive, to compensate for very high cost of R&D and long processes of clinical trials, and usually very effective. Miriam added that she feels like new, so alive, because of the new medicines she is taking but are very expensive.

Actually the most expensive medicines are those that don't work. Even a P1 tablet is "expensive" if it does not heal a patient, if it allows the disease to evolve into something more sinister and fatal inside a person's body. A drug that costs P1 M or P5M treatment but can heal a cancer patient, can be considered "cheap" if a patient survives to live more years or decades of productive life.
------------