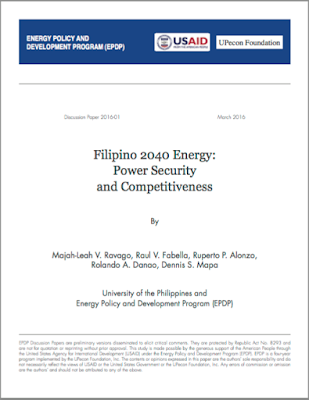 Yesterday afternoon, I attended the Energy Policy and Development Program (EPDP) lecture at the UP School of Economics (UPSE). The 5 co-authors were all there. The powerpoint version of this 34-pages paper was presented by Dr. Majah Ravago. Lecture room was full, audience from different groups, energy companies, NGOs.

Sadly, there was no one from the WWF because during the open forum, I referred to them as "dishonest people" (audience laughed) for claiming that the capacity factor of renewables is 53%. From WESM data, capacity factor of solar in the PH is around 18% only, wind about 14%, biomass about 12%, so where did the WWF get their 53% figure, from the cold air of the Arctic or Antarctica?

(next 2 photos below from EPDP fb page) 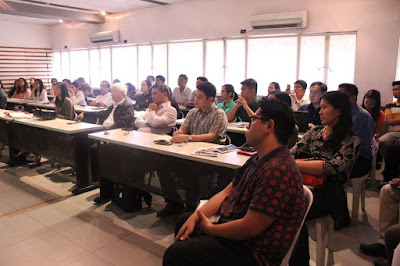 The EPDP team however used the WWF data in projecting PH power capacity by 2040. I hope they will discard that WWF paper as a source and make another PH power projection. 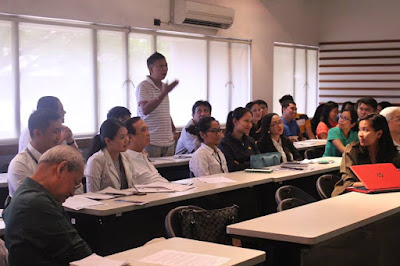 Among the slides shown was this chart, that the generation charge in Meralco area is the biggest component of our monthly electricity bill. I pointed out during the open forum that one reason for this is that the cost of generation for natural gas power plants is distorted upwards by government royalty or energy tax, the Malampaya royalty. It is about P1 to P1.50/kWh, the royalty alone, that government collects from the Malampaya consortium (composed of Shell, PNOC, another company) that developed the nat gas field offshore of Palawan, which the consortium passes to the 2 power companies that own and run the 3 nat gas power plants in Batangas, and these companies ultimately pass it to us electricity consumers in the form of higher generation cost. 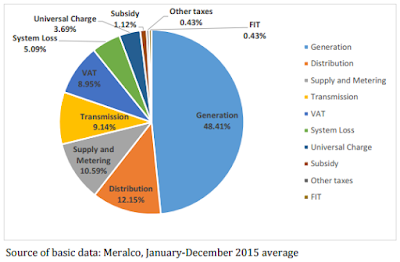 So this type of energy pricing by the gencos in the PH, that P4.48/kWh from nat gas includes the Malampaya royalty or energy tax (about $1 B a year, makes the government richer, greedier). If there was no royalty, then the consortium and the 3 power plants in Batangas that use the Malampaya nat gas can sell at around P3 to P3.50/kWh including their profit already.

I did not comment anymore on carbon tax as inspired by the UN FCCC global energy racket. There were many hands raised that afternoon from an active audience.

Nonetheless, this table and projection shows a very important point -- that if we use the 30% mandatory renewables share by 2040, we will require some 48 GW of installed power cap (in 2014 it was 16+ GW) and the average generation cost will be P6+/kWh.

Whereas if we discard that 30% mandatory renewables, we will need only 40.5 GW of installed capacity to serve some 130 M Filipinos by 2040. And the cost of generation that consumers will pay will be lower, only about P4.7/kWh.

I like the points made by Alan Ortiz of San Miguel Energy Corp. (SMEC), the biggest genco in the country, followed by Aboitiz Power, First Gen and so on. Especially on the cost of building renewable power plants: about $5M per MW for solar, $4M/MW for wind and hydro, $2M/MW for coal. And solar requires 2 hectares of land to produce 1 MW of power. Me thinks that if actual electricity production is considered and not the installed capacity, it will require about 5-6 hectares of land to produce 1 MW because solar's average capacity factor is only around 18%. That is, a 100 MW solar farm can actually produce only around 18 MW on average.

After the lecture. All UPSE faculty members and EPDP Fellows, except the left most :-) From left: Ruping Alonzo, Raul Fabella, Ernesto Pernia, Majah Ravago, Rolly Danao. Sir Ruping (also my ninong, wedding godfather) and Raul were my former teachers at the school. 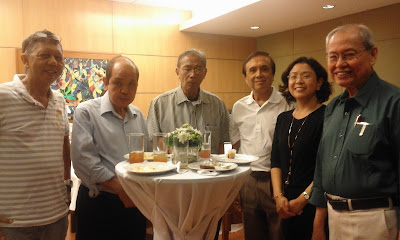