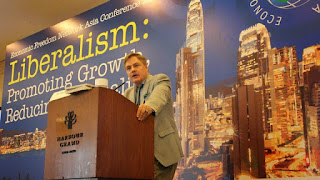 • Introduction about the Occupy Wall Street – background and the demands behind this movement – started by a group of disgruntled students mostly from privileged backgrounds and having incoherent demands and philosophy. In particular, their demands were based on the concept of ‘99% and the 1%’, which proved to be a very popular meme and this entire Occupy Wall Street movement quickly caught popular imagination.

• Focus on the meme ‘99% vs. 1%’ - originally started by the students who were essentially anti-globalization. The irony of it is that it quickly became popular across the globe as the rallying cry of the Occupy Wall Street.

• The global inequality has consistently reduced over the past 20 years and is still falling. But, within countries, the inequality is increasing/at elevated levels.

• Impact of immigration on inequality within countries should be carefully understood and decoded: for instance, the US allows lot of immigrants (from poor Latin American countries and especially those with poor education and hailing from very poor economic backgrounds) and therefore the income inequality within USA is much higher (i.e. Gini coefficient is much higher for USA). In contrast, the European countries (eg. France, Germany, etc.) have much lower immigrations (due to comparatively more restrictive immigration policies vis-à-vis the USA) and also have lower inequality i.e. lower Gini coefficients. The lesson from this is that we can have (a lower equilibrium) equality by making others lives worse.

• But, the current debate on inequality (Eg: Thomas Piketty’s Capital) never focuses on global inequality but mostly on inequality within countries. Tom Palmer pointed out the conceptual faults and defects in his book’s thesis.

• Made a strong case of why people like Piketty are less egalitarian than someone like himself who is a ‘hardcore capitalist’. In essence, the question is why does inequality in possessions still amount to more egalitarianism?

• Usually, the state’s interventionist policies in the name of egalitarianism (Eg: subsidies to special interest groups) serve to transfer wealth from the unorganized majority to the organized minority. This is nothing but predatory and rent-seeking behavior by the organized minority. That is why capturing political power assumes so much importance, especially in heterogeneous societies; the powerful few control the levers of redistribution to favored groups.

• On the other hand, and paradoxically, the so called unequal/capitalist societies actually give a greater opportunity to achieve equality/egalitarianism in outcomes by allowing a freer, more open allocation of resources based on market prices.

• At the heart of creating a more just and egalitarian society is the concept of equality before the law – where we have ‘rule of law’ and not ‘rule of men’. Only such a system would allow the less privileged to get a chance to move ahead in life.

• Therefore, aspirational claims to equality would be realized only with market-based provisioning of equality of opportunities. Eg: The rise of Dalit entrepreneurs in India. Prior to 1991, they had notional, paper based equality rooted in Indian Constitution and the law. But only after free markets expanded are they having a real shot at prosperity.

• Equality of opportunity, equality to access, equality to power, equality before law…this is the real equality that we should aspire for and not mere notional equality that attempts not just redistribution/reallocation of resources: ostensibly, from rich to the poor, but actually by tearing down the rich – and not lifting the poor.
--------- 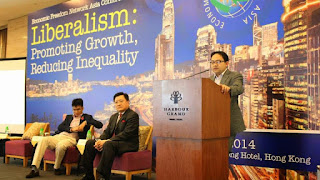 • The AEC is coming up in 2015. But, there are growing calls for protectionism and also not much demand for pro-market policies and concerted effort by forces. Most pro-trade  organizations are focused on local and national issues. But anti trade organizations are well organized. SEANET hopes to fill this gap and meet this requirement.

• IDEAS organisation is committed to promoting free market policies and pro growth approaches in the ASEAN region.
• Overview of the history and background of the ASEAN group.
• Among these countries, fears among SMEs and labour group exist that big corporations would dominate the AEC region. However, they actually would greatly benefit from greater opening of the markets in various countries. Eg. SMEs would benefit from greater access to institutional finance, greater ease of doing business and accessing larger markets thanks to lesser regulations and hurdles and better property rights.

• The benefits of AEC are multiple and spread across various sectors: (1) unified, single, huge market and production base, (2) coherent and integrated external policy.

• The benefits of AEC for entrepreneurs are clear. The most to gain from AEC are the large, established businesses. However, SMEs too would need to be ensured better opportunities; for this, several steps must be taken (none of which are protectionist and anti-markets and therefore lack fidelity to principles of liberalism and free market economics). It is important that the potential benefits to SMEs are articulated effectively.

• On the opposite spectrum, large companies would have deeper pockets and greater access to capital. But the medium enterprises are neither fast-and-nimble nor have access to huge capital. Hence the threat to medium enterprises in the new AEC dispensation: they should either scale up or scale down to survive.

• At the same time, there should be a concerted effort to ensure that SMEs and small players do not “lose out” in the new, liberalized market dispensation. They justifiably need hand-holding and capacity building so that they are prepared for the new, upcoming market scenario.


• One key aspect is access to institutional finance by the SMEs: we need to ensure that banks are free from political interference and nepotism/favouritism so that they are not forced to end up with the burden of non-performing loans after lending to undeserving candidates.
-------------