Election 21, Duterte and the Australian, US Ambassadors' comment on rape joke

"US Ambassador Philip Goldberg echoed the statement issued by Australian Ambassador Amanda Gorely, who criticized Duterte for saying that he should have been the first to rape Jacqueline Hamill, an Australian missionary who worked in Davao City.

“Rape and murder should never be joked about or trivialized. Violence against women and girls is unacceptable anytime, anywhere,” Gorely posted on her Twitter account on Monday.

“I can only agree with the colleague from the Australian Embassy,” Goldberg said in an interview aired by CNN Philippines.

“Any statements by anyone, anywhere that either degrade women or trivialize issues so serious as rape or murder, are not ones that we condone,” he added." http://www.manilatimes.net/us-slams-duterte/257173/

And Duterte went ballistic. He and his supporters say the man is "tough talking" and he is pikon with that simple comment, not related to the elections, can apply to anyone and no one  in particular.

Change is coming if he becomes President. Change for the worse. Many of his supporters will be cheering with him on this too. 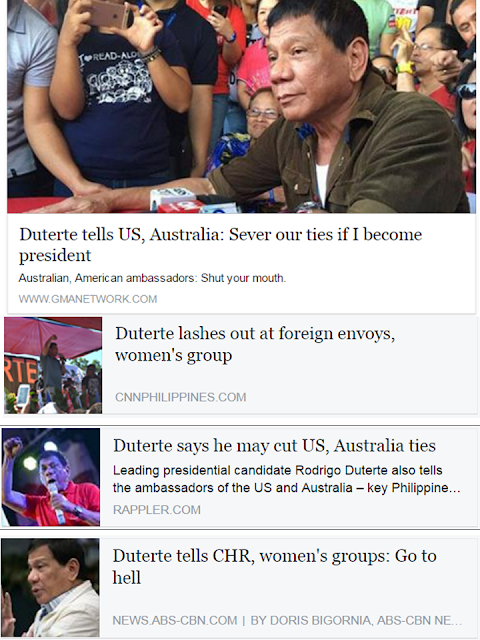 When people self-destruct, we should not interrupt. Lalo lang magagalit mga mob supporters nya at PI din sasabahin.  I like it the more he opens his foul mouth, and I wonder how his supporters, especially the thinking ones, can continue supporting him.

A friend, Jose Custodio posted this in his wall,

"So recently I was talking to a member of the media and I mentioned to the person that as you guys in media cover the Duterte beat and see the throngs of supporters and see their vitriol against the media outfits and reporters, and the actual threats they make against your life and property, isn't it like covering your impending doom as a free and independent media should he actually win the presidency?"

Perhaps a news report in the coming days, "CPP NPA to campaign all out for Duterte and expose US imperialism in PH elections." Hard core fans + CPP-NPA militants + rape jokers = Duterte mob rule. 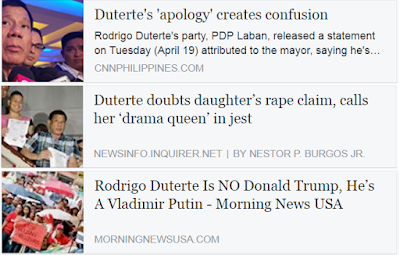 One more characteristic of Mr. Duterte is his high intolerance of opposing views. Any Ambassador based in Manila who will comment unfavorably on his actions, not even his policies, he will challenge to cut diplomatic ties. Legislature that will not sing Halleluiah to all his pronouncements, he will abolish Congress. Ordinary criminals, including those are just suspects with raw facts, will be summarily executed. Intolerance anytime, anywhere. And his supporters will be clapping him.

Nope, he does not represent the rule of law. Rule of law is enforcing laws without exception. If the law says the accused criminal is entitled to a due process, then there should be due process, allow the suspect to have some legal defense. Automatic and summary execution of suspected criminals is not rule of law. It is rule of men, rule of dictatorship.

Posted by Bienvenido Oplas Jr at 10:04 AM