Many international agencies, both multilateral and private, have been producing growth projections for the Philippines and other developed and emerging economies in Asia. Most of these projections are short-term, usually for 2016 to 2018, and they show generally that the Philippines has better prospects for faster growth than other economies.

NEDA also launched the “Ambisyon Natin 2040” or “#SanaSa2040” campaign this week, which mostly focuses on a “Middle Class Lifestyle” long-term perspective for Filipinos. It is a modest goal actually compared to the more ambitious goal of “Developed Country by 2050” that was articulated by other groups about two years ago. The latter is an ambitious but not impossible goal.

One factor that contributes to this optimistic view of the Philippines is its huge and young population, an indication that it will result in more workers and entrepreneurs, more producers and consumers, more sellers and buyers. 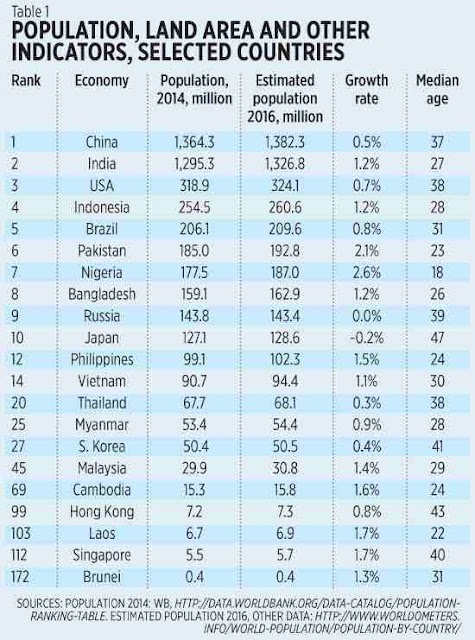 Our average population age is only one-half that of Japan, 13-14 years younger than that of China and the US, and 16-19 years younger than those of Singapore, South Korea, and Hong Kong. These rich and developed East Asian economies will soon be needing more migrants to sustain their economy, especially their huge number of pensioners. One can expect the big need for health professionals from highly-globalized and English-speaking Filipino professionals to fill the needs of these rich East Asians, not to mention those from US-Canada and Europe.

A big, young population means a big pool of highly trainable work force, eager to explore the world, and learn about the latest technological innovations and production processes.

Ten or 20 years from now, the situation will further tilt in favor of the Philippines because of its huge pool of young children at the moment. Meaning 10 to 20 or 30 years from now, they are the workers, managers, or shareholders of many enterprises here and abroad.

Nearly one-third of the Philippines’ nearly 100 million people in 2014 were babies up to 14-years old. That’s huge compared to Japan’s 13%, Hong Kong’s 12% and Singapore’s 16%. Only Laos and Cambodia have a similar situation but they have a smaller population (see Table 2). 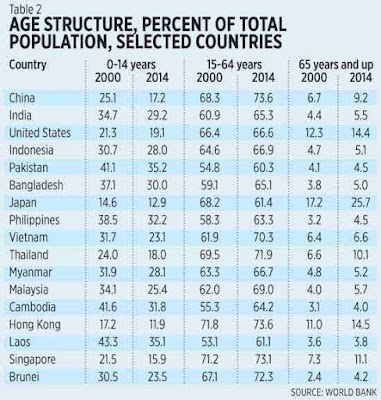 There are important policy implications for the Philippines of the above data.

One, public health care and education should focus on the young and less on the adult population because education is now more decentralized with the continued revolution in IT. There is bigger role for household and private sector education and skills development these days are much easier and faster since intensive training with very competent international speakers can be done online.

Two, migration of university students, labor and professionals should be facilitated with few transparent rules and not be peppered with envy-inspired regulations and revenues-raising measures. In the case of rich and ageing East Asians (Japan, South Korea, Taiwan, Hong Kong, Singapore), north Americans and Europeans, either they will need more Filipino health professionals, or they will build retirement and modern health care facilities here and bring many of their ageing people here.

If more Filipinos have good-paying and stable jobs, they will need less welfare and subsidies from the government, and the state’s high and multiple taxation policies will no longer be justified.

Bienvenido S. Oplas, Jr. is the President of Minimal Government Thinkers and a Fellow of SEANET and the Albert del Rosario Institute (ADRi). minimalgovernment@gmail.com.
-----------