PH as 4th biggest shipbuilding nation in the world

I saw this article, I shared in my fb wall, and soon, more than four dozen other people including some friends, have re-shared it. People look for good news and they find it, they gladly share. http://www.dk-export.dk/nyt-og-presse/nyheder/$5-billion-maritime-business-in-the-philippines/ 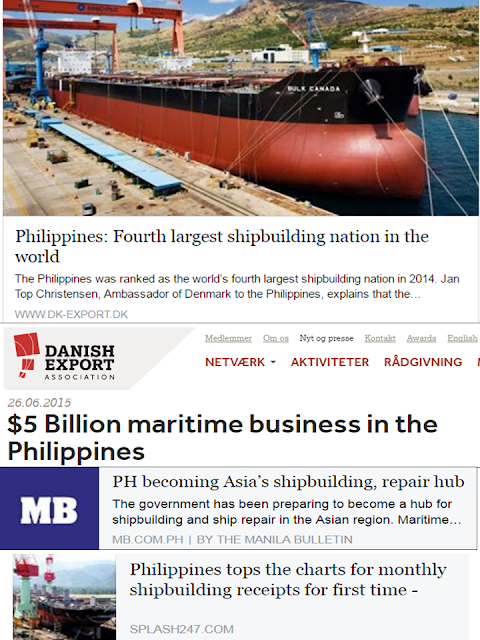 I saw Tsuneishi shipbuilding plant in Balamban, Cebu, around 2002 when  I joined the UPSE-PDE study tour in Cebu. Not for "ordinary" workers there, required medium to high-skilled labor, like welding different steel parts -- no trace of welding, it's like one whole metal sheet folded. So the skills training was intensive at the start, through time, the locals have developed their own set of skills.

A friend added that ‘The locals were sent to Japan to be trained. A successful venture with the Aboitiz! Done almost "off-the-radar".’

Another friend suggested that the PH should start building military ships like an aircraft carrier. But who would buy such giant carrier made in the PH? The existing shipbuilders here like Tsuneishi, they may have zero work or experience making military ships, only cargo and passengers ships -- those huge ships transporting steel, cement, coal, rice, etc.

With AEC, "unli flights" by ASEAN-based airlines will soon kick off. To follow will be "unli sails" by ASEAN-based shipping lines. RORO ports almost everywhere as fast craft boats, designed and manufactured in the PH, become more available, more affordable.

What government can do, or should NOT do, to help this industry develop further:

1. Do not create new taxes or raise existing ones that apply to the sector. Business bureaucracies, simply cut and reduce them.

2. Further bring down  the cost of electricity via less taxes and bureaucracies for gencos.
Posted by Bienvenido Oplas Jr at 6:17 AM