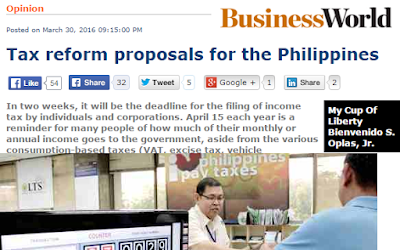 In two weeks, it will be the deadline for the filing of income tax by individuals and corporations. April 15 each year is a reminder for many people of how much of their monthly or annual income goes to the government, aside from the various consumption-based taxes (VAT, excise tax, vehicle registration tax, and so on) that they pay.

With the ASEAN economic integration that occurred at the start of 2016, there is both business competition and complementation among firms and individuals that are based in the 10 member-countries. And tax competition is among such factors that people look up to. They can put up their manufacturing plants in country/ies which have (1) lower and simpler taxes, (2) lower cost of electricity, (3) lower cost of labor relative to skills, among others. And then sell the products to other ASEAN countries at zero tariff.

How competitive and business-friendly, or non-competitive is the Philippines compared to its neighbors in taxation policy? Let us review the most recent numbers (see Table 1). 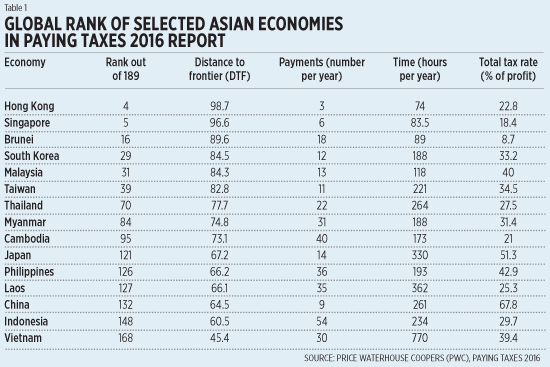 Of the 189 countries covered in the 2016 PWC report, the Philippines ranked 126th or in the third quartile, which is not really a good position. Compare the numbers for the Philippines vs those of Hong Kong and Singapore, which indicate that they are most business-friendly and hence, most attractive to investors.

* 36 payments of taxes and mandatory contributions vs only 3 and 6 for HK ang Singapore.

* 193 hours per year to pay for all those steps and procedures vs only 74 and 84 hours for HK and Singapore.

* 43% of commercial profit goes to paying various taxes to government (local and national) and social insurance state corporations (SSS, PhilHealth, Pag-IBIG) vs only 23% and 18% for HK and Singapore.

In total tax rate alone, here are the numbers for the 10 ASEAN countries for the 4 PWC Reports. The Philippines has the highest rate in the region, followed by Malaysia and Vietnam. Very prominent are the huge improvement or reduction of tax rates for Brunei and Myanmar (see Table 2).

Tax wise, the Philippines is NOT an attractive place to do business in the ASEAN. It has the highest total tax rate (TTR) in the region plus complicated and bureaucratic procedures. Although in number of hours, Vietnam proves it is indeed a socialist and bureaucratic state; in number of payments, Indonesia’s bureaucracies are most notable.

The time to cut the Philippine’s number of taxes and forced contributions, and income tax rates was yesterday. So we need to move fast today and tomorrow.

Among the significant reform measures are the following:

One is to cut the income tax rate (currently it is 32% for individuals and 30% for corporations) to a flat rate of only 20% or less. Recall an earlier paper of this column where it was shown that

Tax revenues (TR) is a product of tax rate (t) multiplied by the quantity (Q) or number of taxpayers, individuals and corporate.

If there is only one form of tax, the income tax, then there are two ways to raise TR:

(i) raise t or keep it at a high rate and wait for Q to rise because of increase in population and number of private enterprises, or

(ii) reduce t and watch Q to expand faster than the decline in t.

The second measure is to allow the island-provinces and other far flung provinces to become new countries, and encourage tax competition and governance competition with one another. They should compete with Metro Manila, Cebu, and other big provincial centers.

The third proposal is to have zero national income tax, “No tax on work” proposal, and allow the provinces to impose income tax on top of other local taxes that they collect like real property taxes and business permits. The national government can continue collecting various consumption-based taxes like VAT, excise tax, and franchise tax. The key is to have provincial tax competition without disintegrating the country into many new island-nations. Many social services done by the national government should also be devolved further to the provinces and cities.

Lower tax rates, good governance, quality of infrastructure, and peace and order will prompt provinces to compete with one another, which, in turn, will help empower people to vote with their feet. Companies meanwhile, will be encouraged to go to areas and provinces that give them more peace and order, better roads and cheaper electricity, low or reasonable tax rates that are commensurate with the services that they receive.

By shrinking the national government bureaucracies and empowering the local and provincial governments under the spirit of tax and economic competition, the public will be better served because the leaders know that beyond voting by the ballot, the people are also voting with their feet.

Bienvenido S. Oplas, Jr. is the head of Minimal Government Thinkers, and a Fellow of South East Asia Network for Development (SEANET). minimalgovernment@gmail.com