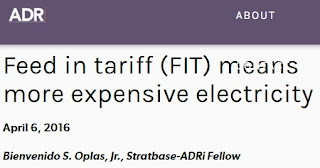 
The Philippines has the unhealthy label of having the “second or third most expensive electricity prices in Asia” next to Japan and Singapore. This is not a good news for energy-intensive industries like manufacturing and hotels where electricity demand can be running 24/7.

With ASEAN economic integration, many big energy-intensive industries will be put up in cheaper-electricity countries like Vietnam, Thailand, Malaysia, Indonesia and Cambodia, then export to the Philippines at zero tariff. That means potential job creation that fails to materialize here.

It is important then that all succeeding government energy policies should be geared towards reducing the prices of electricity. Unfortunately, we are doing the opposite with the implementation of the feed in  tariff (FIT), priority dispatch, and  renewable portfolio standards (RPS) under the Renewable Energy law of 2008 (RA 9513).

FIT means guaranteed fixed price for solar, wind, biomass and run-of-river hydro for 20 years. FIT for solar and wind in particular are 2x current average prices of conventional energy sources. Priority dispatch means even if cheaper conventional energy is available, expensive renewables will be prioritized in the grid. And RPS is the minimum percentage of generation that should come from eligible RE resources.

Let us briefly review the  case of Germany – #1 in solar installation  in the planet, #3 in wind after the  US and China, and perhaps having the most gallant policies  in FIT, other subsidies, and priority dispatch of renewables in the industrialized world. 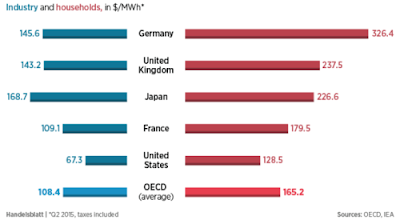 So Germany has the most expensive residential electricity tariff and second most expensive in industrial tariff next to Japan. The authors further made these observations:

* Ordinary consumers saw their electricity bills double since the introduction in 2000 of RE; total cost has risen from €0.9 billion in 2000 to €23.7 billion last year and will likely hit €25.5 billion this year.

* Some 350,000 German households have had their power cut off, up 13 percent from 2011. Shocking inefficiency with RE producing €25 billion in electricity-bill surcharges this year will only be worth €3.6 billion on the market.

* Green-power surcharge on electricity bills already cost consumers €188 billion since it was first introduced in 2000 – or €4,700 for each of the country’s 40 million households. The nuclear shutdown will cost another €149 billion by 2035, according to a Stuttgart University study.

How expensive is FIT in Germany that they are among the factors why a number of that country’s top manufacturing and energy-intensive firms like Siemens and BASF are moving or have already moved their production facilities abroad?

Figure 2. FIT rates in Germany, lessons for the Philippines

Aside from FIT, priority dispatch and RPS, the RE law gives many other subsidies or relaxation of taxation to renewable producers, privileges that are denied to producers of conventional but cheaper power sources. Among these additional sweetheart deals contained in Section 7 of RA 9513 are: income tax holiday for 7 years, duty-free importation of RE machinery, equipment and materials within the first 10 years, special realty tax rates, net operating loss carry over (NOLCO) for the next 7 years, 10% corporate tax rate (not 30%), and tax exemption of carbon credits.

Renewables are good and useful because they help expand power capacity in the country. But the FIT, other subsidies and privileges given to them are not, they contribute to more expensive electricity prices and grid-destabilizing power supply that go up or down within minutes.

If cheaper electricity, more stable power supply, and more investments and job creation are to be the priority for the Philippines, we should allow market pricing of energy sources and in the grid dispatch. The expanded MW allocation for solar, from the original 50 MW to 500 MW, should be recalled. There are pressure and lobbying to further raise solar allocation to 2,000 MW to be eligible to FIT.

Biomass and run-of-river hydro do not create much problem now compared to solar and wind. So the existing FIT-eligible allocation of 250 MW for both can be retained. Additional pressures to expand this capacity should be resisted too.
Bienvenido S. Oplas, Jr. is a Fellow of the Albert del Rosario Institute, a BusinessWorld columnist, and President of Minimal Government Thinkers. minimalgovernment@gmail.com.
------------