If the issue of rallyists and demonstrators in Kidapawan, Cotabato was asking government for subsidy to deal with El Nino crop failure, why (1) most plackards were campaigning against Oplan Bayanihan (OB), (2) farmer demonstrators were supposed to be very poor and hungry yet have neat, uniformly-printed plackards, (3) there were flags with hammer and sickle, (4) occupy an important highway connecting Davao-Cotabato, among the major urban centers of Mindanao? 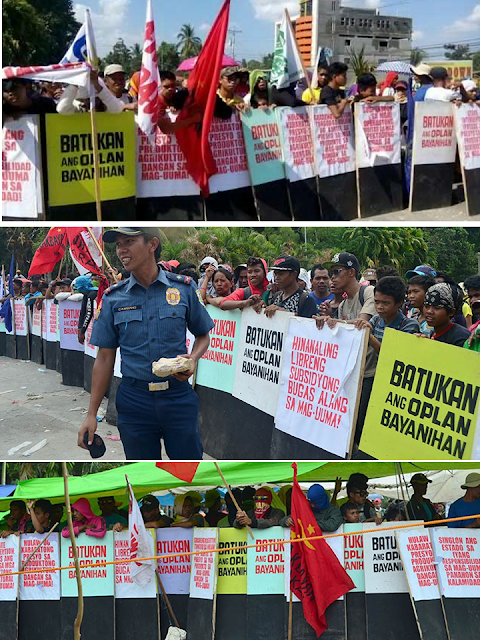 Ahaa, anti-OB is mainly the campaign of the CPP-NPA and affiliates -- 6 of those 9 sources, except from #5, 8 and 9. And the campaign has drowned the legitimate farming issue of farm subsidy against El Nino crop damage.

This video shows that (1) BFP started spraying water, (2) PNP started tactical advance, (3) protesters started throwing rocks and stones, lots of of stones, (4) PNP retreated, some running away in panic, (5) a small group of PNP was cornered by the advancing protesters armed with rocks, (6) gun shots.

The CPP-NPA militants + Bayaan Mo Na front organizations manipulated the farmers. From the plackards, there seems to be little mention about subsidy against El Nino, more of anti-OB. Plus the red banners, plus the KMP.

A day before the dispersal, those at the frontline looked like non-militants, young boys, some women. But the plackards were consistent -- Oppose OB.


Some (or many?) reporters are simply pro-demonstrators, like this story:

"All they wanted was rice, plus free vegetable seedlings and financial subsidy in the wake of the El Niño. But after three days of protest to air their demands, all that the protesting farmers and their supporters got were bullets." http://www.mb.com.ph/demand-for-rice-turns-bloody/

Wanted rice and vegetables only? But many plackards show that the highway occupants wanted the military/AFP's OB to be stopped, which has zero relevance to El Nino issue. The reporter did not mention anything about this. 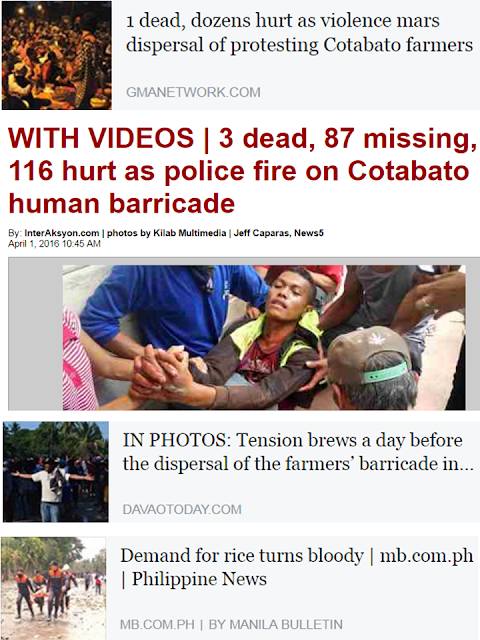 El Nino also affected the provinces or islands of Negros, Cebu, Mindoro, Masbate, Samar, Leyte, Ilocos, etc. Farmers also suffered there but there were no highway occupation and closure for several days, no demand to stop OB. Why? The CPP-NPA on those provinces were less active, or less manipulative?

Meanwhile, this big El Nino is fading fast. Big La Nina is coming, more floods and destruction of farms soon. Will there be another road occupation and closure in Cotabato, elsewhere?

If the demonstrators, the CPP-NPA and Bayaan Mo Na opposed another OB like Oplas Bienvenido smile emoticon I can understand because that guy always says politically incorrect things, like big El Nino is not man-made but nature-made. But hey, they are opposing another OB, Oplan Bayanihan, that has zero relations with El Nino and prolonged drought.

To summarize my arguments:

1. Wrong venue by the demonstrators, NOT a highway please, there are public plaza, school grounds, idle farms, etc. Rallyists' freedom of assembly is secondary to other people's freedom of mobility.

2. Wrong insertion of anti-OB campaign in an otherwise legitimate farming issue of drought and crop failure.

3. Wrong use of live bullets against the demonstrators. Teargas, rubber bullets, strong water pressure, truncheons, etc. would be enough to disperse them from the highway.

In a debate in a friend's wall on this subject, I argued the following:

1. Inconveniencing the public via closure of a highway to get public attention is not justified. The rallyists have created more public animosity, not sympathy, in that act. Except for the few deaths, perhaps hundreds of thousands of people in Davao and Cotabato are clapping the PNP for opening up the road again.

2. When the Iglesia mob closed and occupied Edsa for 2D/3N to protest against DOJ's Leila de Lima, that act was road dictatorship. Even assuming that their "cause" was 101% valid, their choice of venue was 101% wrong. Their "freedom of assembly" is secondary or far out compared to the "freedom of mobility" of other people.

3. Road/highway closure and occupation for days is evil and wrong -- whether the perpetrators are Iglesia or Catholic or IS or commies or capitalists or batman. No justification. Kidapawan highway closure for 3 days is wrong. Mali lang ang govt kasi may namatay, but the dispersal was 100% correct.

Posted by Bienvenido Oplas Jr at 12:07 AM