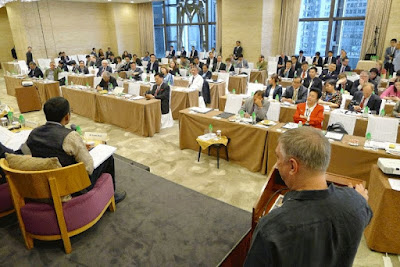 • Introduced the Council of Asian Liberals and Democrats (CALD, politicians) and EFN (network of think tanks and liberal activists/individuals)

• The state of democracy in Singapore (SG) and HK is of great interest to the entire world itself. SG and HK both have very high inequalities. SG reportedly has the highest number of per capita millionaires; at the same time nearly 5% of the population draws less than US$5,000 per capita.

• SG has a broken pension savings scheme and an entire generation is at a threat of no security/income. According to the ILO, SG’ workers work the highest number of hours in Asia; are the most stressed out in Asia.

• Still, no protests and opposition in SG. The only reason why SG does not witness protests (such as those currently taking place in the HK) is that SG crackdowns heavily on gatherings and political opposition.

• There is a need to understand the difference between extractive societies (where a tiny minority extracts the resources) and inclusive societies (creative destruction is inherent to inclusive capitalist societies). Despite prosperity and high wealth SG’s economy does not see innovation: nothing like the SG version of the Apple or Google. SG depends heavily on immigrants amd the finance sector – no atmosphere and culture of innovation, democracy, creative destruction and etc. Staid, one party rule is mostly to blame – no mention of political freedoms – till recently human rights itself was a taboo word in SG.

• SG signed a free trade agreement in the USA. This has improved trade and wealth overall, but apparently has not increased freedom, prosperity and health for its poorest of the poor and poor workers. Interests of SG corporations are visibly protected – but the interests and concerns of the workers are not protected.

• SG’s FTA with EU: EU and USA are seen as exploiting the workers of SG through the FTA. Liberals should have the foresight, courage, compassion and commitment to fight for the freedoms and rights of the workers. Because, without protecting the rights of the workers, there is no true liberty and freedom.

• HK and SG both face unique opportunities in the form of the current challenges. Liberals and Democrats have to deeply introspect and decide on the role they should play. 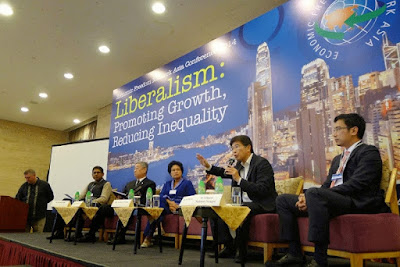 • Gordon Tullock (who passed away only last week) is the father of public choice theory which is about the importance of decentralization of power, the need for constitutional checks on power, etc.

• HK has achieved a lot in terms of freedoms for the people and there is a need to cherish,
preserve and promote these freedoms.

• There is a need to inject the concept/underlying philosophy of human rights in the discourse on economic growth and progress.

• Typically, the debate about inequality (esp. in Germany and the rest of Europe) is centered on the approach to bring everybody to the same mean/level. Usually such discussions are dominated by socialists and social democrats. Liberals are generally seen as supporters of inequality (because that is the driver of capitalism, market forces, etc.)

• Strengthening human rights and political freedoms should be seen as integral to reducing/removing such inequalities.

• The search for a remedy to inequalities leads to a tendency to look too far into the past…where we find several models that have failed and proven to be wrong. But let us not be fearful of past failures and be too bound by them. Let us boldly go forward and am confident that this conference would certainly help chart new courses.

• Described the precursors to the HK’s Occupy Square/Umbrella movement, the initial stages, her role, and the key events on how they unfolded. How the police used force and arrests to control the key opposition political leaders and legislators.

• All these wonderful pro-democracy events are taking place only because the citizens esp. the youth and opposition leaders of HK are demanding greater freedoms - which were promised to them by China.
------------