In a campaign rally, Presidential candidate Rodrigo "Digong" Duterte made these statements referring to the Malaysian missionary who was among those hostaged, gang-raped and later murdered by escaping prisoners in Davao City in 1989. The video was posted in youtube. Digong said, 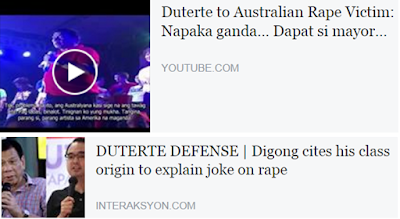 I am reposting two comments in fb from two friends:

"Define obscenity : When a public official jokes about rape in a public speech and has the gall to ask for your vote to make him president.

I am Filipino. I am from Davao. And NO, he is not my president." 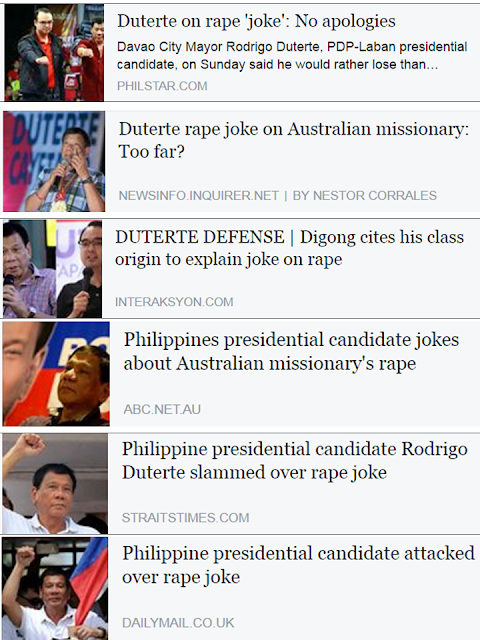 "It's not about foul language. It's not about the joke. It's about repeated pattern of offensive behavior & remarks that treat women as sex/rape objects. It's about twisted mindset that sends the wrong message to everyone from kids to would-be rapists.

Clearly he just doesn't get it. The enormity of his mistake - not from the political point of view, but from a moral perspective. He doesn't know right from wrong. Black from white. Tama o mali.

I also grew up with toughies who talked 'gutter language' in Cotabato, Leyte, Cebu & later Diliman. We spoke Bisaya - Cebuano. We also had foul language & our daily dose of cursing. But we never, ever found rape acceptable or funny."

In the late 90s, I have a housemate who was a former political detainee during the Marcos years. He told me that when he was caught, the military mixed up the pol. dissidents with ordinary criminals on same cells. The latter including hardened ones look up to the former, would listen to them inside the jails. My friend observed that these criminals would have no problem with fellow prisoners who have stolen, stabbed or shot someone. But they are super-angry at rapists, binubugbog daw nila ang mga rapists na mapasok sa selda nila.

Lesson? Even ordinary criminals who have disrespect for private property and fellow men have some respect for women. This Du30 is a different animal.


Meanwhile, many Duterte supporters were laughing and having fun at this kind of joke? Anak ng... Magsama ang parehong utak at ugali.
-----------