Several issues related to rice farming and trading in the Philippines hogged the news recently. The first of course is the big El Niño and crop failure in many provinces in the country and many other tropical countries. Second, the farmers’ rally in Kidapawan, Cotabato that turned bloody early this April. And third, on large-scale agricultural smuggling including rice. 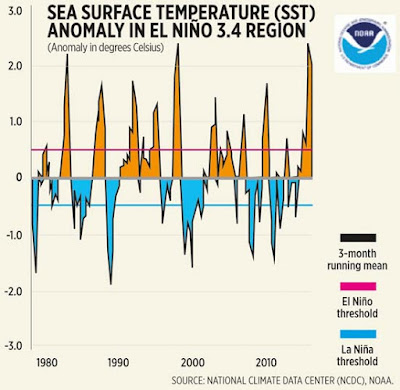 The Kidapawan rally that claimed two dead rallyists and two policemen in coma was unique because while this El Niño also adversely affected many provinces in the country, there was no highway occupation for days and bloody demonstration that occurred.

On the third item, Dr. Ben Diokno in his column here in BusinessWorld last April 6, 2016, quoted Bobi Tiglao’s numbers saying that “smuggled value averaging $19.6 billion annually, an explosion from the comparable figures of $3.1 billion and $3.8 billion yearly during the terms of Presidents Joseph Estrada and Gloria Macapagal-Arroyo, respectively.”

These three and related events in rice farming have become part of the issues raised by Presidential, Vice-Presidential and Senatorial candidates running for the May 2016 elections. We discuss these issues by asking these questions:

1. Is this El Niño so bad and “unprecedented” that prompted many people to demand doubling, even quadrupling of government spending in agriculture to help “fight man-made climate change”?

2. Is rice “self-sufficiency” a valid must-goal for the Philippines and hence, demand massive reallocation of resources from other sectors to agriculture in general and rice farming in particular?

3. Is continued rice protectionism valid, and agricultural smuggling really that bad against the Philippine economy and the consumers in particular?

From Graph 1, the answer to #1 is No. This big El Niño has a precedent, the most recent was the 1997-1998 El Niño and consistent with natural weather and climate cycles, we should expect another big La Niña to follow later this year like what happened in 1999-2001. That means another round of heavy rains and flooding that can cause another round of huge crop damages.

To answer question #2, the numbers here will help (see table).

From the above numbers, the answer to #2 is another No. Our neighbors Thailand and Vietnam simply have plenty of rice land, around two times that of the Philippines, in contiguous and single land mass, with access to huge irrigation from Mekong River, Ton Le Sap River, other huge rivers that provide huge irrigation.

The Philippines has a comparatively small rice land area, slowly being converted to residential, commercial and industrial uses. Being an archipelago, there are very few large rivers that can provide continuing irrigation to wide rice lands.

Besides, Thailand and Vietnam get perhaps only about 1/5 of the number of typhoons that enter the Philippines, average of 20 typhoons a year, about half of which make actual landfalls and cause more damages and crop losses. These two countries are also done with their agrarian reform and forced land redistribution; the Philippines is not done yet, after 43 years of implementation, starting only in 1972 Marcos’ land reform, not counting earlier land reform programs.

So forcing rice “self-sufficiency” cannot be a valid goal. Instead, pursuing rice “food security” is more appropriate. We continue producing more rice with the help of more modern technology, and any deficit can be filled by rice importation at free trade, lower prices from our ASEAN neighbors.

And the answer to question #3 is another No. This is not to justify rice smuggling but bringing in cheap rice from Thailand and Vietnam and other ASEAN countries is pro-poor and pro-consumers, like the carinderia owners and customers (especially jeepney and taxi drivers, students, job seekers).

The government rice protectionism policy -- via rice quantitative restrictions (QR), imposition of 35% tariff for imported rice, the National Food Authority (NFA) rice importation monopoly -- is both anti-poor, anti-consumers. For many Filipinos, they want cheap rice, and such is readily available from our neighbors Vietnam and Thailand, and soon, Cambodia, Laos, possibly Myanmar.

The following are reform measures that the next administration may consider.

One, if the government should insist on rice “self-sufficiency,” then it should allow corporate, large scale rice farming. Economies of scale, tapping the knowledge and services of plant scientists and geneticists, use of more farm mechanization, will greatly improve the country’s rice output. Double or triple the current four tons per hectare average output, coupled with reduce post-harvest losses.

Two, decouple NFA’s marketing/proprietary and regulatory functions. Privatize the former and retain the latter, sell many NFA assets like warehouses, use the fund to help reduce huge NFA debt, about P155 billion as of mid-2014. Assuming a 3%-4% interest rate, we are paying around P5 billion each year on interest payment alone for the NFA debt.

And three, liberalize rice importation by removing NFA importation monopoly delegated to licensed importers and traders, removing the QR for rice, and significantly cutting the import tariff of 35% down to 5% or even zero.

Postscript on the Kidapawan demonstration: (1) The majority’s freedom of mobility is superior to rallyists’ freedom of assembly. Highway occupation and closure is wrong. To remove the conflict between these two freedoms, mass actions and demonstrations should be held in public plaza, or idle farms near big roads and highways. And (2) use of live bullets by the police to disperse the crowd is wrong. The state should be above the fray and avoid killing its people as much as possible, regardless of the provocation by rallyists. Exceptions would be when firearms are explicitly displayed and fired by the demonstrators against the police, the public, shops and other civilian structures.