The increase in feed in tariff-allowance (FIT-All) has been approved by the Energy Regulatory Commission (ERC) recently. As a result, Meralco and all other distribution utilities nationwide will be collecting 12.40 centavos per kWh of electricity consumption starting this month. The amount is higher than higher than 4.06 centavos/kWh that was collected in 2015.

Even consumers from Mindanao -- an island not connected to the Visayas and Luzon grids -- will pay this FIT. If Mindanao consumers are spared of this additional charge, the FIT-All will be much larger in Luzon and the Visayas, which host an increasing number of wind and solar farms. Another FIT hike will be expected next year.

Unlike the previous electricity price hikes that met a big public backlash, such as the price hikes of P4+/kWh in November-December 2013 which should go back to old rates after two or three months, FIT additional collections are not short term but long term and can last 20 to 30 years or more.

The Philippines has the highest electricity prices in the ASEAN and has the second-highest in Asia, next to Japan. This is not good especially if we are serious in attracting more investments that can give more jobs to more Filipinos (see graph).

There are many factors why this is so, among which are the various taxes, fees, and royalties imposed by the Philippine government on energy sources (like the natural gas royalty from Malampaya gas field in Palawan) and on companies themselves.

In the coming general elections next month, all presidential candidates support more renewables. Sen. Grace Poe even proposed that power distributors should be “compelled” to use renewable energy. Davao Mayor Rodrigo Duterte is explicit in supporting more coal power plants, and administration candidate Mar Roxas supports the use cleaner fossil fuel like natural gas, along with renewables.

Among Senatoriables, it is weird that former DoE Secretary Jericho Petilla would even blame some provisions of the EPIRA law of 2001 for the high cost of electricity in the country, saying that the law prevents the government from putting up new power plants that can help rival private generation companies.

Government-owned National Power Corporation (NPC) used to be the sole power plant owner and operator nationwide. Instead of bringing down the cost of electricity while raising power capacity, NPC has largely succeeded in piling up huge amount of debts, mountains of debts hundreds of billions of pesos, that it could not pay and hence, were ultimately passed on to taxpayers.

Renewable sources such as solar, wind, geothermal, and hydroelectric have the following characteristics that are dissimilar to conventional sources like coal and natural gas. Among these are: (1) zero or near-zero variable operations and maintenance (O&M) cost, but (2) low capacity factor or actual electricity production relative to its rated capacity, except geothermal, (3) high levelized cost of electricity (LCOE) and, (4) generally higher electricity prices if subsidies are not given.

LCOE is a good summary measure of the overall competitiveness of different power generation technologies representing the per kWh cost of building and operating a power plant over an assumed financial life and duty cycle.

Here is the LCOE in the US four years from today. The capacity factor is generally higher compared to those in developing countries like the Philippines (see table). 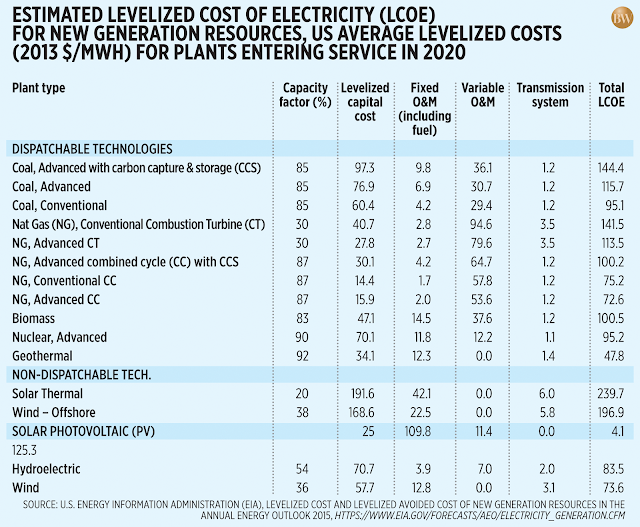 When the Renewable Energy (RE) Act of 2008 (RA 9513) was created, a lot of subsidies were put in the law that effectively pampered developers of renewables like solar, wind, and biomass. Among these are the: (1) feed in tariff-allowance (FIT-All), (2) priority and mandatory dispatch into the grid, (3) renewable portfolio standards (RPS) or the minimum share of renewables in power generation, and (4) various fiscal incentives.

The list of those various subsidies and incentives, FIT rates in Germany and the Philippines, are also discussed in my earlier article, “Feed in tariff means more expensive electricity” published by the Albert del Rosario Institute (ADRi) blog, Spark.

A FIT that increases every year -- which has already taken place in Germany, UK and other European economies, and now in the Philippines -- means rising electricity prices even if generation, transmission, distribution, supply, and various other fees and tax rates remain the same.

So far, it seems that not a single candidate for a national position has openly criticized this setup of ever-rising electricity prices in the country. On the contrary, some candidates even justify expensive electricity so that we can help “save the planet.”

Expensive electricity means more dark streets at night as LGUs, villages, and households save on their monthly electricity bills. When many streets and roads are dark at night, there are more road accidents, more destruction of public and private properties, more crimes, more rapes, injuries, and deaths.

Worse, when some households’ electricity connection is temporarily cut off due to non-payment, people have to use candles for a few hours or days, and candles are among the major causes of fires. These social costs are often avoided or not recognized by the campaigners of expensive, unstable renewables.

Expensive electricity also means less businesses and jobs that can potentially be created here. Energy-intensive companies and manufacturing plants will try to avoid investing in the Philippines -- where electricity prices are expensive -- since they will put up their factories and big offices in ASEAN countries with lower energy costs, then export to the Philippines at zero tariff. They only rent smaller offices here to facilitate business transactions.

As a developing and emerging economy, we should have cheaper electricity, bigger power capacity and reserves to ensure 24/7 availability of power, even in periods of huge spikes in electricity demand or damaged power facilities due to strong storms or earthquakes.