During global health pandemics aided by hysteria, there is global economic slowdown, deep slowdown bordering on contraction (“negative growth”). Millions of jobs are lost as companies and shops either scale down operations or shut down. Some governments around the world adjusted to help the ailing and dying businesses and job creators via various forms of tax cut (see Table 1). 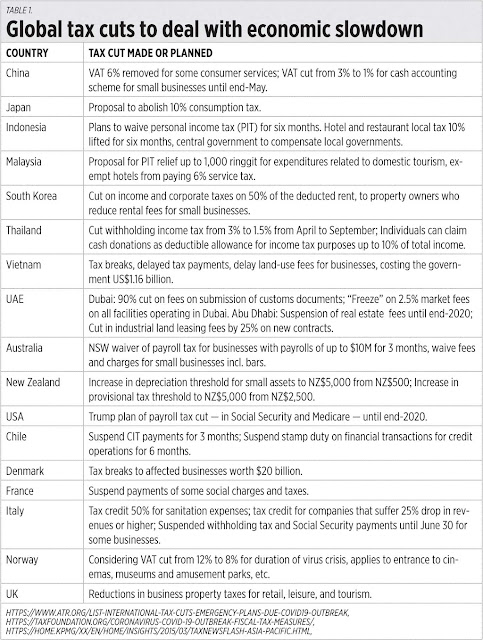 Aside from tax and fees cut, there are various regulatory forbearance made. Examples are:

Taiwan: Delay payment of taxes for one year or pay their taxes in installments over 36 months or three years.

The Philippines: Delay payment of income tax from April 15 to May 15.

The Philippine government should consider any of the tax cuts above, or one tax cut — in VAT or CIT or PIT — even for 1-2 months after the first full month of recovery. Business losses are everywhere, job losses possibly in millions, they need a respite.

Recently big business groups and federations and some professional organizations in the Philippines issued a joint statement urging the government for big expenditure push of P281 billion on top of the P4.1 trillion approved budget this year.

It is a weird call, businesses and professionals calling for more spending, more borrowings, which will require more taxes, instead of calling for tax cut. As businesses are shut down, many government agencies also shut down.

The President can order mandatory cut and savings in all executive offices for certain expenditures especially the maintenance and other operating expenses (MOOE) which includes office rentals and supplies, electricity, many meetings, travels domestic and international, conferences, intelligence funds, etc. The forced savings can be used for whatever fiscal stimulus is decided on, without need for additional spending, borrowings, and higher taxes. Higher public debt should also be avoided because our interest payment alone is approaching half trillion pesos already, principal amortization not included yet (see Table 2).

Posted by Bienvenido Oplas Jr at 9:16 AM