One of the consequences of the COVID-19 scare is the huge decline in global oil demand and low oil prices because oil supply remains high, thanks to Trump’s policy of “energy dominance”: from only 5 million barrels per day (mbpd) at the end of Bush, Jr.’s term in 2008, to 8.8 mbpd at the end of Obama’s in 2016 (a 3.3 mbpd increase after eight years), and 13.1 mbpd by February 2020 (a 4.4 mbpd increase in just three years and two months).

The OPEC + Russia conspiracy to prop up oil prices via joint a production cut for about three years ended last week when OPEC pressured Russia to have a joint output of 1.5 mbpd by the 2nd quarter 2020 and Russia said “no.” Since then, the already low price of $45/barrel in end-February went down further to $31, with an intra-day low of $27 last Monday. 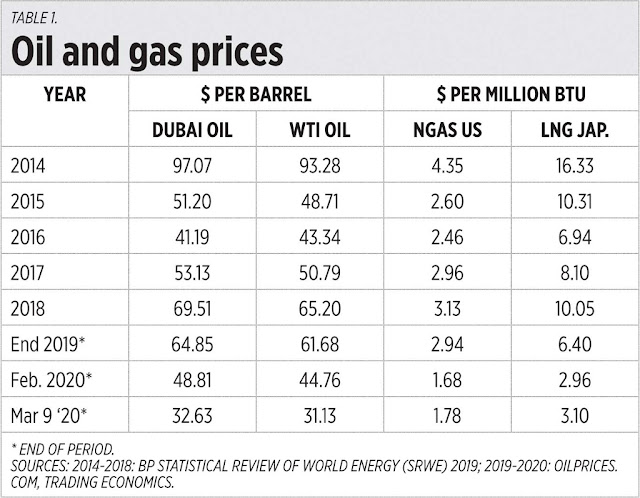 The Philippines is not a big consumer of natural gas and we are using only indigenous natgas from the Malampaya field in offshore Palawan, no imported liquefied natural gas (LNG). China, Japan, South Korea, and Thailand, on the other hand, have big and rising consumption of natgas (see Table 2). 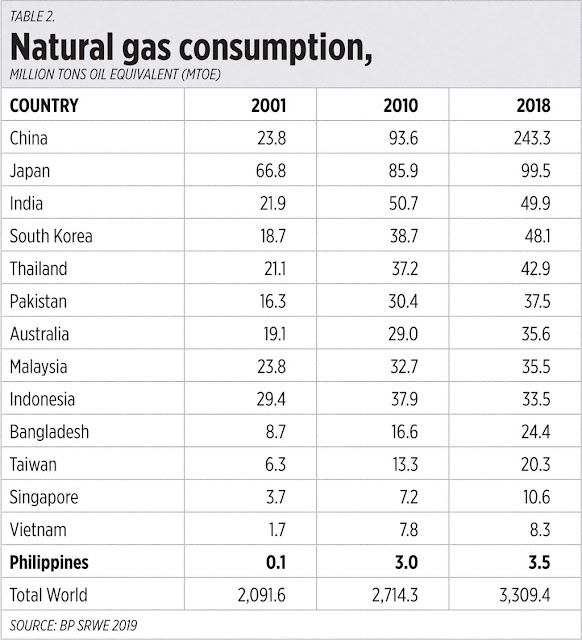 Certain sectors are pushing to develop facilities for imported LNG, preferably with fiscal sweeteners like some Department of Energy/Philippine National Oil Co. support in building the facilities, and the usual take-or-pay provisions or guaranteed income.

Aside from these expectations, natgas is favored because it was exempted from tax hike under the TRAIN (Tax Reform for Acceleration and Inclusion Act) law of 2017. So, if imported LNG is brought here, it will be exempted from excise tax but imported oil and imported coal are still slapped with high excise tax.

The reason for natgas favoritism is the belief that natgas is a “clean” fossil fuel. If people are really allergic to fossil fuels for causing “man-made” global warming/climate change (CC), then they should demonize all three — coal, oil and gas — and not just the first two.

AGHAM Party list, headed by Congressman Angelo Palmones, is among the groups that reject the “natgas is clean” hypothesis.

Last month, the Gas Policy Development Project (GPDP) at the UP School of Statistics submitted its report, “Market Profiling with Emphasis on the Use of Liquefied Natural Gas (LNG) to Power Economic Zones,” to the energy department and project donor, the US State Department. It was jointly authored by Drs. Majah-Leah Ravago, Raul Fabella, and Karl Robert Jandoc.

Among the conclusions of their paper are:

a.) LNG as alternate energy source would allow for more competitive electricity costs owing to the current oversupply of natural gas in the world market; and,

b.) Natgas can lower the Philippines’ carbon emissions since it emits 60% less carbon dioxide than coal, and transition to more renewable future as it can ease the intermittency problem of solar and wind. I agree with a. but not b.. More competitive and lower electricity prices, yes, natgas can do that. But demonizing CO2 is wrong. CO2 is the gas that we humans and our animals exhale, the gas that our crops, flowers, and trees use to produce their own food via photosynthesis. CO2 is a useful gas, not an evil-pollutant gas that must be demonized and over-taxed. And climate change is largely natural (“nature-made” not “man-made”) and cyclical (warming-cooling) for the past 4.6 billion years since planet Earth was born.

And now the hot months of March to June are here. There are no new peaking plants to provide extra power during peak hours of weekdays so the move now is to help reduce demand via an interruptible load program (ILP) by the energy department and peak/off-peak (POP) program by Meralco. ILP is good because it will mobilize hundreds of gensets of big companies, sort of “backyard peaking plants” in voluntary scheme. But the Department of Energy’s plan to make it mandatory with fines and penalties is not good.

The POP program is good because it is largely voluntary, with 6,000+ private participants observing time of use electricity consumption. Private sector initiatives are cool and useful, not mandates and coercion.
------------------

Posted by Bienvenido Oplas Jr at 12:59 AM