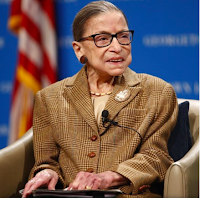 Yesterday a very famous Justice of the Supreme Court of the US (SCOTUS), Ruth Bader Ginsburg (RBG) died at 87. She has been battling cancer for the past few years, in and out of the hospital. RIP, Ms. Ginsburg.

Appointed by former US President Bill Clinton in 1993, she is the second female justice in SCOTUS history, that alone is a great achievement.

Now there is vacancy in the SCOTUS, it must be filled up, naturally. And a twist, the anti-Trump crowd do not want him to appoint any replacement and that it must be done only by whoever wins in the Nov. 3 Presidential elections. This is like asking the President to do his work as President in dealing with the virus and other functions but he must not do his work as President in appointing a new Justice of the SCOTUS. If Trump does it, there are already explicit threats and blackmails of violence, see https://thefederalist.com/2020/09/18/after-rbgs-death-left-wing-activists-promise-violence-if-trump-appoints-her-replacement/.

This is from Reza Aslan tweet, he seems to be a US-Iranian citizen, has 291,600 twitter followers. Outright, explicit threats. 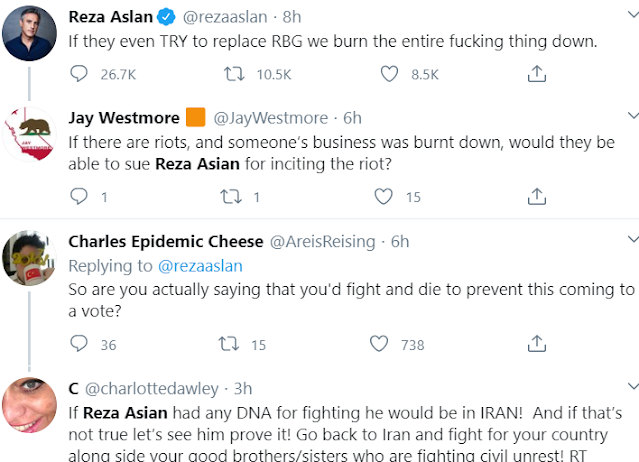 If Trump or any of his officials would tweet "burn down...", twitter will likely censor and delete or flag it for "going against community standards." But since it's an anti-Trump tweet, it will remain there, thousands other tweets inciting violence. And TDS people clap and approve the explicit call for violence, wow.