BWorld 454, Flatten the fear and hysteria, not the economy

As more comparative economic data come in, the more they confirm that the Philippines’ hard, strict, and draconian lockdown policies did more harm than good. We can summarize them as follows:

One, the Philippines has second worst performing gross domestic product (GDP) in Asia next to India, the economic contraction is similar or worse than countries with five times to 15 times as many COVID-19 deaths per million population (CDPMP) than us, like the US, Brazil, Canada, Mexico, UK, France, Italy and Spain. Hong Kong has a deeper contraction but it is partly due to their Basic Law having been amended so that some China laws will apply to Hong Kong.

Two, Philippines unemployment rate of 10% last July is again second highest in Asia next to India, and worse than those in the UK, France, and Italy which have very high CDPMP.

Four, the Philippines should not have had such a steep contraction considering that we have a small GDP of only $377 billion in 2019, just slightly higher than our neighbors with small populations like Hong Kong, Singapore and Malaysia (see Table 1). 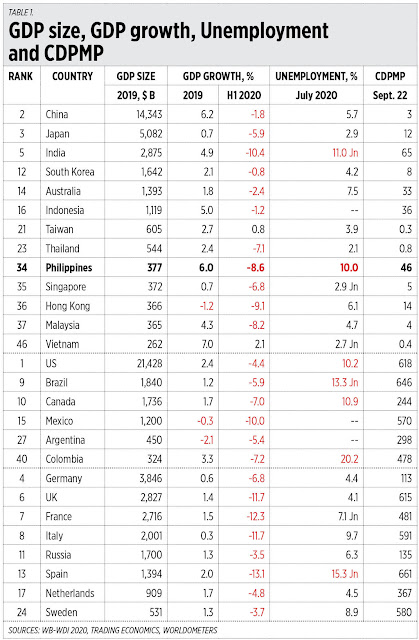 Among the questions that I often encounter from non-economists is “What do those GDP growth or contraction mean to our daily lives?”

It is a valid and practical question so we have to quantify in pesos, not just percentages, the changes in GDP. We better use current or nominal prices as they reflect current spending and income. The deep contraction means that some P680 billion in national income was lost in H1 2020 compared to H1 2019. It also means that our GDP size in H1 2020 was even lower than H1 2018 or two years ago, despite the increase in population of nearly 3 million over the past two years. 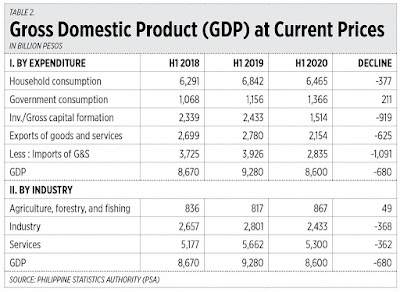 The hypothesis “more lockdown = more virus control” has been proven to be wrong. Otherwise we should not have a high number of COVID-19 cases and deaths now considering the very strict lockdowns from March to May.

President Rodrigo Duterte’s policy of indefinite lockdown until a safe and effective vaccine is available is wrong. It will prolong the economic agony without reducing COVID-19 cases. Instead, the President and the Inter Agency Task Force (IATF) should open up the economy by Oct. 1, lift the generalized lockdown for all, and limit the quarantine only to small areas where serious cases are reported, and retain the restriction on mobility those 70 years and above and immuno-compromised people.

The doctors in the Flatten the Fear Philippines coalition suggested many cheap immune-boosting measures that people themselves can take without waiting for the vaccine like taking more Vitamins C and D, the use of known prophylaxis (hydroxychloroquine, zinc, etc.) vs other infectious diseases like malaria.

Yes, there are existing and cheap measures to flatten the fear and hysteria. The economy must rise again, the high government spending and borrowings that will require high taxes and regulatory fees must be controlled and flattened.
-----------------