So, is it worth celebrating the decline in unemployment rate to 10%?

Not really because many of our neighbors in the region did not even experience double-digit unemployment rates both in the first and second quarters of 2020. Even compared to European countries and North-South American countries that experienced 400+ COVID-19 deaths per million population (CDPMP), the Philippines, with only 36 CDPMP, has an “outlier” unemployment experience (see Table 1). 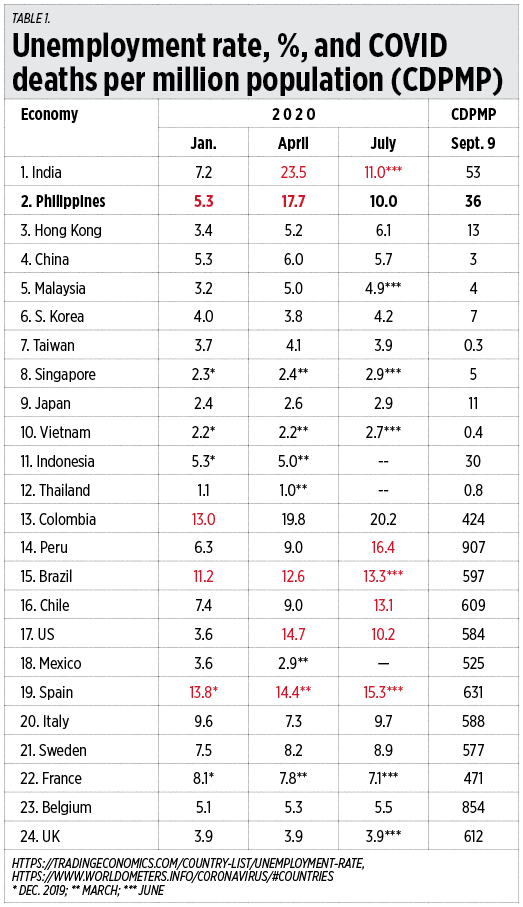 To “jumpstart growth,” the government has embarked on a series of huge borrowings and additional public spending, particularly the Bayanihan I law (which expired in June) and the upcoming Bayanihan II that is waiting for the President’s signature.

Governments around the world including the Philippines regardless of administrations are known for wasteful spending. They have little or no ability to generate fiscal surplus in periods of no crisis, pay back old debts so that when a real crisis comes, they will have more leeway to borrow again.

In 2016, the budget and borrowings made by the previous Aquino administration saw the outstanding public debt stock at P6 trillion. The next three years, 2017 to 2019, saw a big jump in expenditures and the budget deficit so that public debt has expanded by P1.64 trillion or P547 billion/year on average. 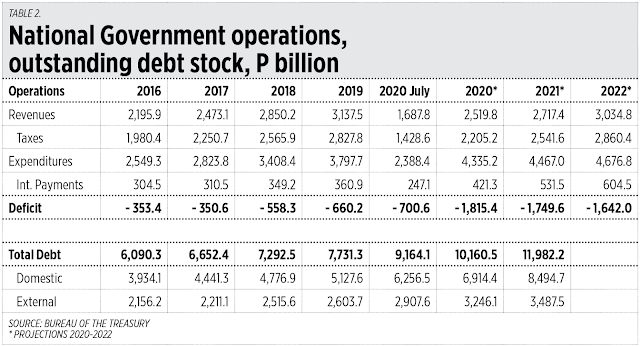 The higher excise tax in petroleum products of P6/liter under the TRAIN law of 2017 has brought extra revenues of P30 billion/year to the government yet it sparked inflationary pressures and some political discontent in 2018-2019. But interest payments of P361 billion in 2019 — 12 times that of oil tax hike revenues — has not sparked any serious political discontent because the amount looks “abstract” despite its size.

I will discuss these numbers in detail plus many other data during my talk on macroeconomic outlook and how they impact the individuals and small and medium enterprises (SMEs) at the China Bank Savings (CBS) this Friday, Sept. 11. The bank also celebrated its 12th anniversary last Tuesday, Sept. 8.

There is a disconnect between two government policies — strict lockdowns that crippled if not killed many SMEs and created millions of new unemployed, versus big spending and borrowings purportedly to revive the crippled and dying businesses. This is similar to a bully who crippled an innocent person then gives him a wheelchair and says that the crippled person should thank the bully for the opportunity to move around via wheelchair.

Consumers and entrepreneurs cannot expect meaningful assistance from the government’s higher spending and borrowings. They are the wrong remedies for the wrong policies (strict, indefinite, no timetable lockdowns). The “animal spirit” of entrepreneurship and innovation must be unleashed. Government should learn to step back, have less regulation, less taxation (thanks to the CREATE bill), less business intervention and arbitrary policy reversals.
----------------