There is continued demonization of a proven effective prophylaxis Hydroxycholoquiene (HCQ), been around for about 65 years in the world to prevent malaria and other infectious diseases, as Covid prophylaxis and early treatment for non-serious infection of the virus to avoid hospitalization. The demonization started when US President Trump announced it as a cheap and readily-available treatment vs Covid, and all the anti-Trump media and politicians demonized HCQ to further prove Trump as a "liar."

The most-proposed treatment by the Philippines' Dept of Health (DOH) and even by the WHO is Remdesivir (RDV), still a clinial trial drug made by Gilead.

No Benefits of RDV were Shown

The average mortality in the RDV arm appeared much lower than in the placebo group only on the first measurement date – 15 days after the start of treatment. The mortality rates reversed after that. By the end of the study (day 29), the total reported mortality was 11% in the RDV group vs 15% in the placebo arm (per table S12)….

Only 46% (486 out of 1062, both arms) of the patients recovered by Day 29 without the use of Hydroxychloroquine. This percentage is much more significant than any Remdesivir percentages. 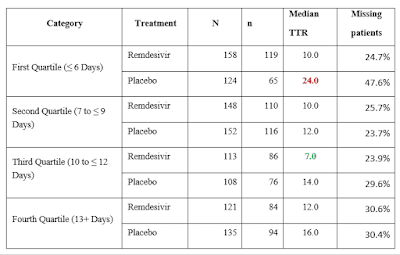 This table shows median “time to recovery” (MTTR) organized by how soon RDV or placebo was administered after symptom onset. The First Quartile (“Q-I”) of patients were randomized and treated 6 days or less after the onset of symptoms, the Fourth Quartile (“Q-IV”) were randomized and treated 13 days or later. Only patients, who recovered by Day 29 are included. The rest (~30%) are those who died, quit, or not recovered by Day 29.

Edsel Maurice Salvana, a known physician who advocates indefinite lockdown in the country, posted in his FB wall dated October 26 at 8:13 AM:

"Just like antibiotic-resistant bacteria, there are more and more people who are resistant to facts. Antibiotic susceptibilty is grouped into sensitive, intermediate and resistant. Fact resistance can be grouped into logical, intermediate, and fringe….

This phenomenon of an expert in one field crossing over to a field of non-expertise is called epistemic trespassing. Because some of these experts are respected for their work, their word carries weight even in areas that they may not have enough knowledge in. A recent example is hydroxychloroquine for COVID-19. Several well-known doctors and personalities endorsed this and clearly misread the science. This sowed confusion and until now is causing harm to patients and the scientific community…"

I have heard that Dr. Salvana hardly tolerates contrary views, deletes such views and comments when posted in his fb wall. Since he is among the most prominent pro-lockdown, pro-RDV, anti-HCQ doctors in the country, I wanted to test if what I heard is true. So I commented this afternoon in his wall:

"Hi Dr. Salvana, this is an interesting paper. The author produced a very quantitative paper and declared no COI, no funding, he just wrote this on his own, thank you."
https://wattsupwiththat.com/2020/10/26/remdesivir-for-covid-19-study-accidentally-proved-effectiveness-of-hydroxychloroquine/ 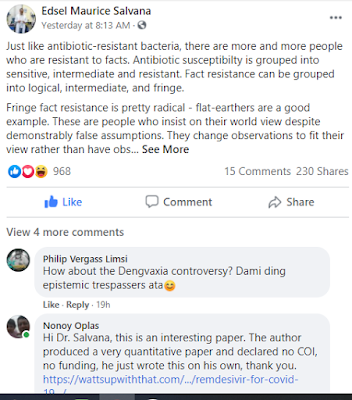 After a few minutes I got notification in fb, "Edsel Salvana replied to your comment." When I checked it, my comment is gone and so his reply is also gone. I commented again, "I cannot see my comment earlier? Did you delete it? Thank you." 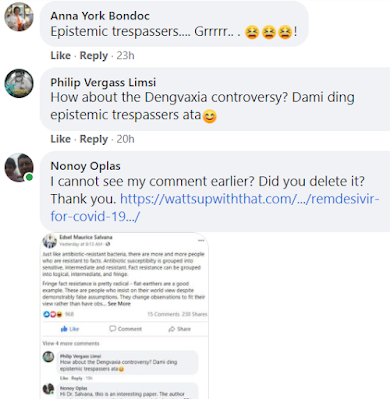 I checked few hours later if my second comment is still there or if he deleted it too, nada. I cannot see his profile anymore, he blocked me. Wow.

I understand that people can decide what goes in their own wall, which comments be allowed and which ones disallowed. I just wanted to check if the claim/allegation that he is intolerant to contrary articles and views is true or not. So now I confirm that it is true. What could be the reason/s?

Meanwhile, this indefinite lockdown dictatorship should end. More than seven months now since March 15 this year.
--------------