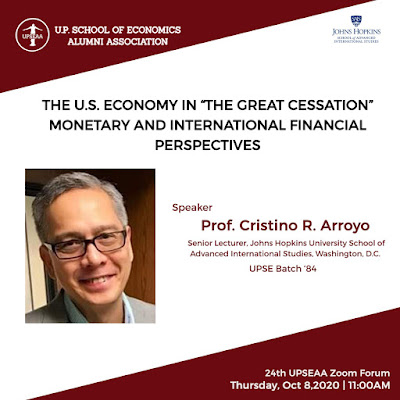 It was my first encounter with the term “Great Cessation”, so what is it?

According to Butch it's a contrast with Great Depression (1930s), Great Recession (2008-09), Great Cessation now, a term used by John Cammack (March 2020), former executive at T. Rowe Price Group.  And “Great Cessation” is shutting down of non-essential shops, restaurants, bars, theaters, having masks, from Todd Buchholz (May 2020).

Butch is an Econometrics, Finance, and Monetary Economics guy, not my field so his lecture was very technical for me. I got lost in a number of his terms and concepts but I also learned new things from his talk.

These two charts among the many he showed. From 1980 this is the 4th recession (at least two quarters consecutive GDP contraction) and this is the deepest. See the big jump in unemployment rate (red line) and big dip in GDP quarter on quarter.

Butch concluded his lecture not with recommendations but with navigating two unknowns: (1) the "Known Unknowns" like When will the vaccine come, Where is the new stimulus, and Whither the unemployment rate. And (2) the "Unknown Unknowns" like the highly contested US Presidential elections, and geo-political economy of a fractured "geo".

Kudos, Butch. You gave me a little headache that afternoon with your technical lecture, hehe.

Butch is very nice to me. I went to Washington DC 3x to attend conferences (2004, 2009, 2019) and 3x I asked him if he could host me for few days in his house after my conf, and 3x he said Yes. Below, July 2019 after I attended the Heartland Institute's 13th Int'l. Conf. on Climate Change (ICCC-13). I stayed in his house in Alexandria, Virginia for two nights. Here at the Old Town Alexandria.

That afternoon he brought me to the Amtrak Union station as I would travel to visit another friend in Forest, Virginia. Thanks again, Butch.
-----------------