The International Energy Agency (IEA), a group of unelected bureaucrats issued a strong report last May telling the OECD member-countries and all other countries around the world to stop investing in oil, gas, coal anymore, starting this year -- to "save the planet." See IEA flip-flops in report #1 vs report #s 2, 3 and 4 below (to save Europe from blackouts, save themselves and their double talk).

The International Energy Agency urged the Opec oil cartel to step up output, saying there was a “clear, urgent need for additional supplies”.

In its latest Monthly Oil Report, the IEA called on OPEC+ to increase production in order to counter higher demand in 2022.
… after its shocking Net-Zero by 2050 report called for no more investments in oil and gas, stated that “OPEC+ needs to open the taps to keep the world oil markets adequately supplied”.  At the same time, the IEA has also reiterated that market realities are at odds with its proposed strategies to reach net zero-emission levels by 2050.

Some European members of parliament have called for an investigation into Gazprom, Russia’s state-backed monopoly exporter of pipeline gas. Foreign officials and traders have questioned why the company has limited top-up sales in the spot market to Europe, saying that this has fuelled a surge in prices that is raising household bills and threatening industries across the continent.

U.S. President Joe Biden issued a request on Wednesday to OPEC+ leaders, urging them to ... produce more oil? Really? Just one day after the U.S. Senate voted to approve a massive $1.2 trillion “infrastructure” bill loaded up with incentives, mandates, subsidies and slush funds designed to stimulate the buildout of electric vehicles (EVs) and renewable energy in the U.S., the President wants the rest of the world to pump more oil.
-------------------

Below, Germany power generation. See low wind onshore and offshore output starting late May 2021 to present except mid-August. It's still the conventionals -- coal, nuke, gas -- that save Germany from large-scale blackouts and deindustrialization.

Then some reports of blackout or near-blackouts in Germany, Europe:

A European power grid disturbance occurred at around 2 p.m. according to the Austrian Power Grid (APG). The normal frequency for Europe is 50 Hz and on Friday afternoon it dropped sharply to 49.75 Hz.

Germany’s Economics Minister Peter Altmaier presented a draft law that would allow electric utilities “to temporarily cut off the charging power for e-cars when there is once again too little electricity available”, an idea known as “peak smoothing”.

“Shutdowns due to power shortages have been practiced for some time. Aluminum smelters, for example, have to put up with having their power cut off for limited periods of time,” reports Tichys Einblick. “These, like refrigerated storage facilities, consume great amounts. It’s a dangerous game because after three hours the molten metal has solidified and the factory is ruined.”

(3) Green Folly: Berlin’s City E-Buses Leave Passengers Out In The Cold…Diesel Buses To The Rescue
By P Gosselin on 17. February 2021
https://notrickszone.com/2021/02/17/green-folly-berlins-city-e-buses-leave-passengers-out-in-the-cold-diesel-buses-to-the-rescue/

The Berliner Morgenpost reported some of the green electric buses operated by the Berliner Verkehrsbetriebe (BVG) had been taken out service due to range problems in the extremely cold weather. Up to 23 electric buses had to be replaced by diesel-powered buses last Monday. Ultimately the German capital plans to convert its entire fleet to electric by 2030.

(4) Germany’s ‘Green’ Energy Failure: Germany turns back to coal and natural gas as millions of its solar panels are blanketed in snow and ice
Laurie Foti  Feb 12, 2021
https://worldnewsera.com/news/startups/germanys-green-energy-failure-germany-turns-back-to-coal-and-natural-gas-as-millions-of-its-solar-panels-are-blanketed-in-snow-and-ice-tech-news-startup/

Sun and wind can’t afford it. Now, we’re replacing it completely with black ones (dirty fossil fuels – emphasis ours).

Professor Harald Schwarz: The guaranteed output of wind energy and photovoltaics is between zero, two, or three percent. So de-facto is zero. You can see that what we have days in the year where there is neither wind.”

(5) This is why we have the most expensive electricity in the world
Deshalb haben wir den teuersten Strom der Welt
Veröffentlicht am Februar 18, 2021
https://blackout-news.de/aktuelles/deshalb-haben-wir-den-teuersten-strom-der-welt/ 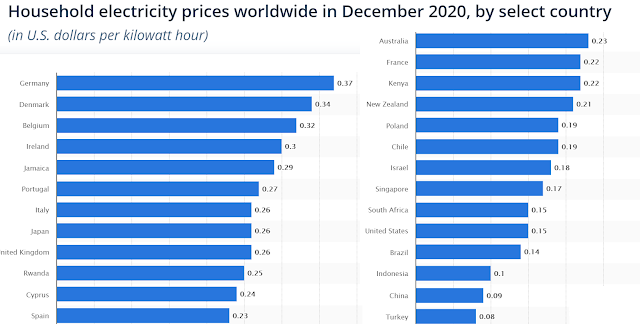 (8) Germany: Coal tops wind as primary electricity source
In the first half of 2021, coal shot up as the biggest contributor to Germany's electric grid, while wind power dropped to its lowest level since 2018. Officials say the weather is partly to blame.
September 13, 2021
https://www.dw.com/en/germany-coal-tops-wind-as-primary-electricity-source/a-59168105

In total, conventional energy sources — including coal, natural gas and nuclear energy — comprised 56% of the total electricity fed into Germany's grid in the first half of 2021. 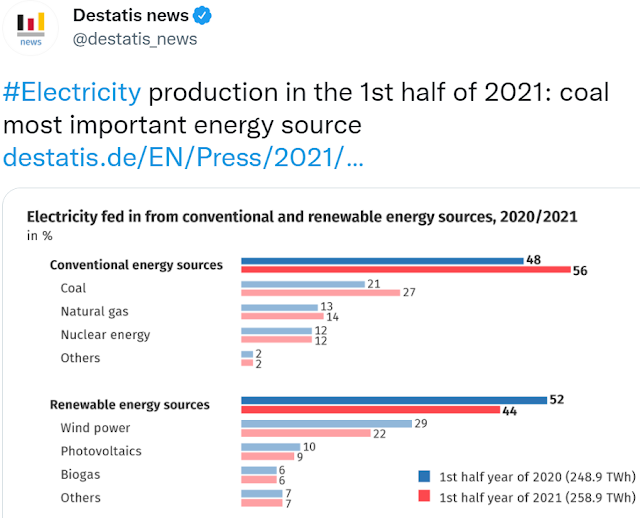 The Germans have broken a record again. Drastically increased wholesale prices and expensive emission rights are driving electricity prices in Germany to ever new record levels. In addition, of course, there are also high taxes and levies for renewable energies and the network charges, which we have already listed in our article “This is why we have the most expensive electricity in the world”.
----------------

Posted by Bienvenido Oplas Jr at 6:00 AM