The Philippines Institute for Development Studies (PIDS) will hold a webinar next week on capitalism reset. 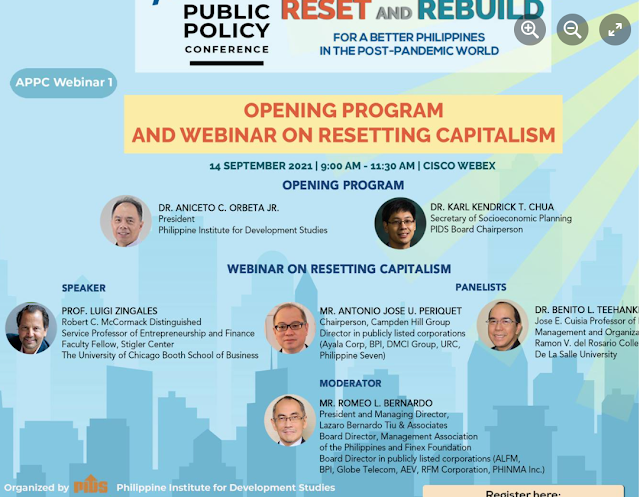 Reset capitalism, hahaha,  Who will reset it, the statists (state worshippers), the capitalists, or both?

Very likely, both. Bureaucrats and politicians who have little or zero experience running a business but think they can control these businesses via regulations, prohibitions, taxation. And "weakling capitalists" who cannot win in open field competition so they seek legislations, other government regulations to cripple their competitors and they become "winners" or "viable." Examples are so many RE companies.

The "reset capitalism" advocates very likely salivate to trim the riches of these rich Filipino families. From Philstar today, 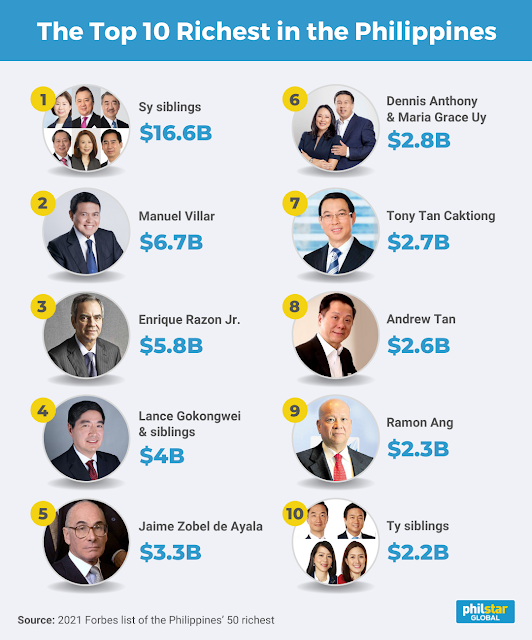 In a country of 110 million people, we only have few $ billionaires, perhaps 30 or 40. Bad. Instead of demonizing rich families, we should aspire to have 200, 300 $ billionaires.

Democracy is the rule of the majority, the collective. If the collective will decide that they should eat even if they don't work, then society should follow, enact laws to implement this including high taxes for the minority, the rich and efficient, to finance this large-scale mass feeding program.

If we go back to Adam Smith's "Theory of Moral Sentiments", followed by "The Wealth of Nations", the man was talking more about liberalism, the individual, the entrepreneur, little about the collective, the group. The "invisible hand" is about the individual pursuing his/her individual interests like earning big to feed the family, and there is public welfare -- mass food production, more efficient food distribution, lower food prices due to more competition -- that is not part of the individuals' original intentions.

Modern economics and politics are highly corrupted. The individual should be heavily taxed, heavily bureaucratized, prohibited from doing many things that the state worshippers have deemed "public bads". No smoking/vaping/drinking here or there, or you can but tax is 3x, 10x the original price, not allowed to use this type of energy, RE only, and so on. Corrupt.

"Freedom is not an absolute right in itself - it must subscribe to the Common Good."

This statement is illiberal. In a free society, everything is allowed except when expressedly or categorically prohibited, like no murder, no abduction, no rape, no stealing, no arson, other acts that harm other people. In an unfree society, everything is not allowed unless people get government permits. Like you cannot build a house, repair your house, reoccupy your house after repair, etc unless you get permits.
---------------